The latest Government figures show that COVID-19 in the UK has fallen between 0.9 and 1 for the first time in two and a half months.

According to The Scientific Advisory Group for Emergencies (SAGE), the growth rate for the virus is between -2% and 0%.

Last week the R rate was between 1 and 1.1, therefore, today’s data shows that the current R number is the lowest it has been in several months.

The Government Office for Science has suggested that the impact of England’s national lockdown is only starting to be seen in this week’s R number. 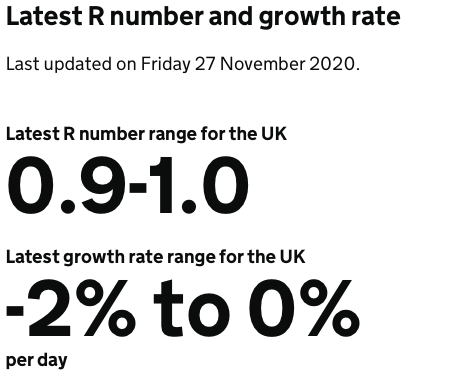 What is the R number and how is it calculated?

The R number is a way of rating the ability to spread of any disease, in this case coronavirus.

It is calculated through data – such as people dying, admissions to hospital and those who have tested positive.

When the figure is above 1, the disease is on a rise and will continue to grow, however when the number is below 1, this means the outbreak is gradually drawing back.

Is the national R number the same in London?

According to the Evening Standard, this news comes after figures were released showing COVID-19 cases had begun to fall across 24 boroughs in London.

However, stated on the Government’s official website the R rate in London is currently in between 1 and 1.1, above the national average.

London will be placed under Tier 2 restrictions from 2nd December and the tier allocations will be reviewed on the 16th December.

Read more about the rules for Londoners here.