Young women over the nation are worried about when they will be able to safely gather for drinks so we asked a club owner what he is planning to solve the problem.

The national debate in the past days has focused on what men can do to make women feel safer and the effectiveness or inefficiency of Girls Night In boycotts.

Night life in England is seeing a drop next week because of spiking scandal & girls/women staying home.

I don’t know if Scotland & Wales are doing #GirlsNightIn too

The boycotts began with an intention to raise awareness and make clubs increase security to protect women on nights out.

“It’s horrible thats the highlight of your evening. Trying not to be spiked.”

There's been another disturbing incident at the Rapture Nightclub, a week after a drink spiking scandal.
A man collapsed, just outside, in the early hours of this morning, with owner Neil Scott insisting his security staff helped the stranger. #perthnews @10NewsFirstPER pic.twitter.com/2YSAqBhL9i

So we asked a club owner what he really thinks of the Girls Night In movement and what he did to make his club more secure for young women and general customers.

For privacy-related issues, the owner didn’t allow us to report his real name.

So we’ll just refer to him as ‘John’.

He assured us that he had taken this problem very seriously and that he had already increased the number of door supervisors inside the venue.

He also increased the number of people being searched, with the CCTV cameras updated for higher resolution.

John also reported that: “We will be offering 200 free glass and bottle covers to help visitors feel safer and all our staff are now subject to random drug searches.” 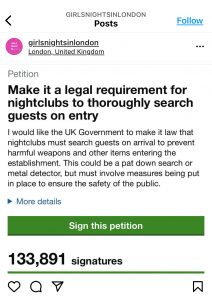 In the end, he asked for greater cooperation between owners and customers, because as he said:

“We need your help too, help us fight this terrible crime. We are with you. We want to make a change but we had a very hard time in the past two years, so please be considerate of us as well. We’ll solve this together.”

Helpful guidelines on the symptoms of drink spiking and how to help a friend who you think has been spiked can be found here.

Hopefully, we will not need them for much more.