Decked out in florescent cycling gear and protest banners shouting “TFL, shame on you”, the group IWGB, The Independent Workers Union of Great Britain, took to the streets to highlight the importance of cycle training and to protest TFL reducing cycling instruction by 50%. 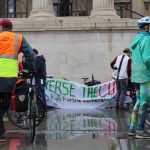 The demonstrators gathering on a wet afternoon in Trafalgar Square. 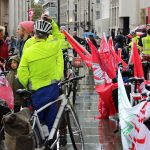 Despite the rain, they were cheerful and keen to spread their message. 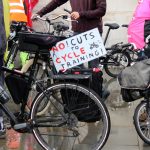 Some bikes came kitted out with banners and bluetooth speakers to lift the mood. 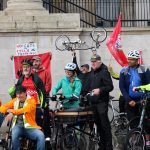 Once gathered, protestors chanted “TFL, shame on you” before setting off. 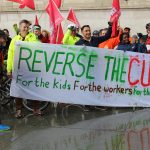 Citing workers’ rights, the planet and raising children safely as their main motivations, the group got chatting to passersby to share their message. 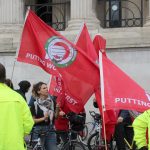 Bright flags and megaphones, the group made their feelings about the training cuts very clear to those walking through Trafalgar Square 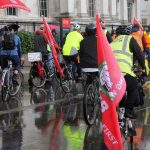 The protestors setting off from Trafalgar Square to cycle to City Hall. 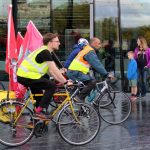 After riding for an hour in the rain, demonstrators arrived at City Hall. 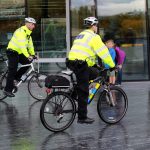 The police escorted the protest on bikes of their own 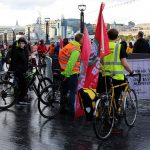 They gathered outside City Hall, with megaphones to grab the attention of staff inside. 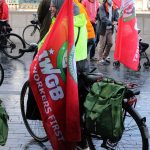 Marian Draaijer, women’s rep for IWGB discussing her commitment to the issue. 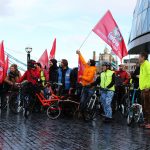 After an hours cycle to City Hall, the IWGB protestors celebrated the event. 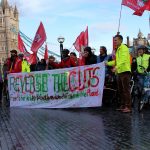 Photo: Tia Janowski Chanting about the TFL cuts, the group proudly spoke about the importance of cycle training to passersby. 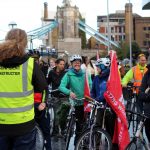 The crowd listened eagerly to their fellow cycling instructors. 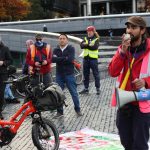 Cycling from Trafalgar Square to City Hall, the group passionately spoke about the importance of cycle training to children in London.

This change in funding not only denies children across London access to cycle training but will largely reduce the amount go people choosing cycling as their main mode of transport in London, the group argues.

Mariam Draaijer, a cycling instructor and women’s rep of the instructors union told Voice of London that “a lot of people just don’t have the confidence to start cycling on the roads if they don’t have cycle training.”

From this, she told us that “With climate change and covid, we don’t want to have all the cars on the roads, not everyone feels comfortable on public transport, so cycling is a really important alternative form of transport, especially in a city like London”.

With COP26 happening this Sunday, this weekend was the perfect time for their protest to promote the importance of cycling in London.

Read more about the environment here.