Reports composed by Combined Homelessness and Information Network (CHAIN) show that between April and September there were 7,641 rough sleepers in Greater London, a 6.7% increase since last year’s 7,157 from the same period.

Charities say data imply a new group of people have ended up on the streets despite protections like the ban on evictions or ‘Everyone In’. This includes young people whom worked in the hospitality sector and lost their jobs since Spring.

Centrepoint, another charity for the homeless, also reported “lots of people losing their homes despite a ban on evictions.” 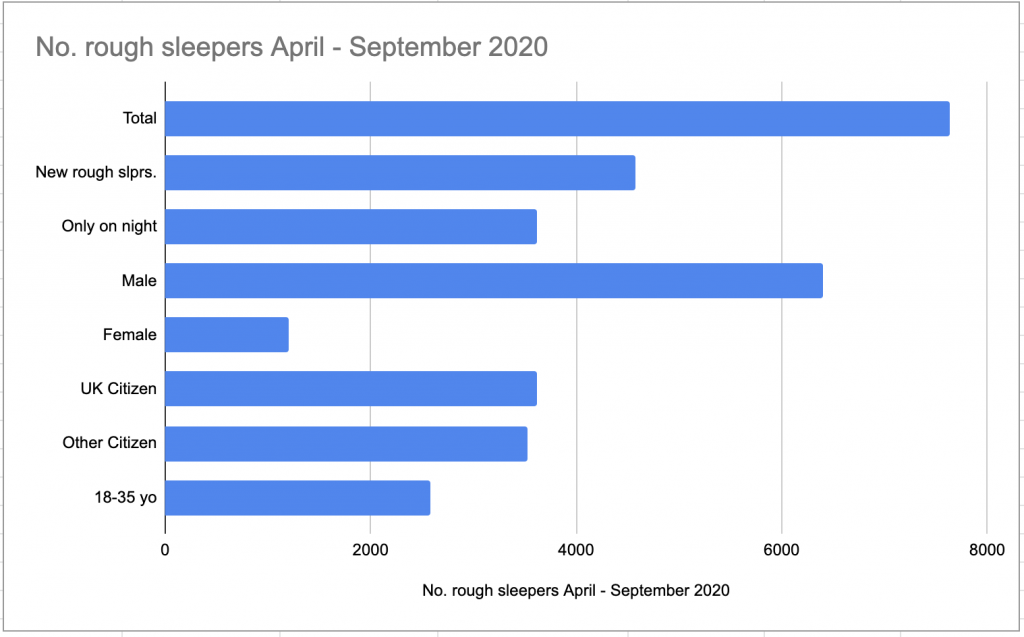 Around 40%, or 4,851 of those found on the street this year, since the first national lockdown imposed because of Covid-19, were seen only once. CHAIN told Voice of London that these people are usually placed in “some form of accommodation…or they move on to other places or find a way to move off the street, such as ‘sofa surfing’.”

The government estimates that by the end of summer, 14,500 people have been helped under its ‘Everyone In’ scheme, a program that temporarily moved rough sleepers into empty hotel rooms and student halls as the pandemic hit the UK.

But the scheme’s primary funding was cut off by the end of May and although it was planned for councils to be given a further £105m to support homelessness, Shadow Housing Secretary Thangam Debbonaire told BBC that “homeless charities have reported an increase in the number of people sleeping rough in the past couple of months.”

The majority of rough sleepers (approx. 84% between April and September) remains male, and predominantly UK citizens (52%).

As previous years, the majority of people sleeping on the streets were found in Westminster Borough (2,575) in 2019/20.

The Labour party urges the Government to re-start ‘Everyone in’ to avoid a large number of people conglomerating into night shelters. In those facilities, social distancing is near “impossible”, and transmission of the Covid-19 virus is very high, according to charities.

St Mungo’s believes “the Government needs to urgently invest £1bn in homelessness services every year until at least 2024” if rough sleeping is to be eradicated for good.

Read more on this: