After a five-day wait, the results are finally in and people around the world no longer have to be glued to their seats, anxiously waiting to know who is the next US president.

Scenes of joy were seen across the country once Joe Biden had been elected the 46th president of the United States.

Spontaneous celebrations broke out across major cities such as New York, Los Angeles and Washington DC.

Partygoers, most of them wearing masks, were dancing, honking horns, banging pots and pans and bellowing, “You’re fired!” 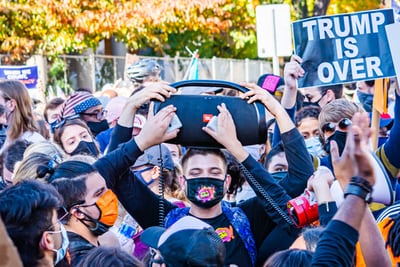 Justin Oakley, a 30-year-old web developer, spoke to the New York Times: “We’ve been through so much this year, I’ve been to so many protests, but now I finally have something to celebrate.”

However, not everyone was pleased.

Scenes of disappointment were also visible. Among Trump supporter’s exasperation and sorrow was abundant.

Screams of “Trump won” and “We will be here forever” were heard across states such as Michigan and North Carolina.

“There’s so much corruption going on in the vote count, it’s all fixed,” Randy Tovichi, Trump supporter, told CNN as he tried pushing through the crowd of thrilled democratic advocates. Overall, whether the supporter was republican or democratic, the result was an instant of relief after a long-awaited election.

As many may know, this election will not only have an enormous impact on America, but the country’s relationship with the rest of the world will change profoundly.

I’m beyond thrilled that my friend @JoeBiden and our first Black and Indian-American woman Vice President, @KamalaHarris, are headed to restore some dignity, competence, and heart at the White House. Our country sorely needs it. pic.twitter.com/yXqQ3tYRoa

Both Boris Johnson and Nicola Sturgeon headed to twitter to congratulate the upcoming president on his victory.

To learn more about how the new presidency will affect the US-UK relationship, click here.

Voice of London also spoke to students from the University of Westminster to hear their reactions about the election’s results.

Joe Biden alongside vice-president Kamala Harris, who is the first women to ever be elected, will be flown into office on 20th January 2021.