The recent expansion of London’s Ultra Low Emission Zone (ULEZ) has led to disagreements about how the change will affect low-income households.

Mayor Sadiq Khan’s decision to expand the ULEZ has been met with mixed opinions online, with environmental groups celebrating the effort to make the capital greener.

Global Action Plan, the charity that founded Clean Air Day, supported the move. Speaking to Voice of London, their Director of Clean Air, Larissa Lockwood, defended the decision: “Those living in the most deprived areas of London are more likely to breathe toxic air, yet are the least likely to own a car.”

Are you ready for the London #ULEZ expansion on Monday? 🎉

The #ULEZ has helped to reduce #airpollution by nearly half in Central London – #GreaterLondon deserves #cleanair too. 🙌https://t.co/F2sV7NDPSa #airquality pic.twitter.com/ld7QFf0IhR

The change aims to decrease air pollution in London, which is said to be responsible for reducing the life expectancy of up to 9,400 people each year, according to London Air.

But many Londoners are concerned over the financial effect the expansion will have.

“I’m on a basic wage, have to pay my own parking at work and now this will be an extra cost. My first few hours on shift will just cover my travel expense.”

What does the ULEZ expansion cover?

The zone now covers the areas in between the North and South Circular Roads, with non-compliant vehicles driving within the boundaries required to pay £12.50 per day, according to Transport for London.

Cars and vans considered ‘non-compliant’ include petrol vehicles made before 2006 and diesels manufactured before 2015.

The majority of Londoners will not be affected by the change, said the London Assembly: “Four out of five cars driving in the expanded ULEZ on an average day are already compliant.” 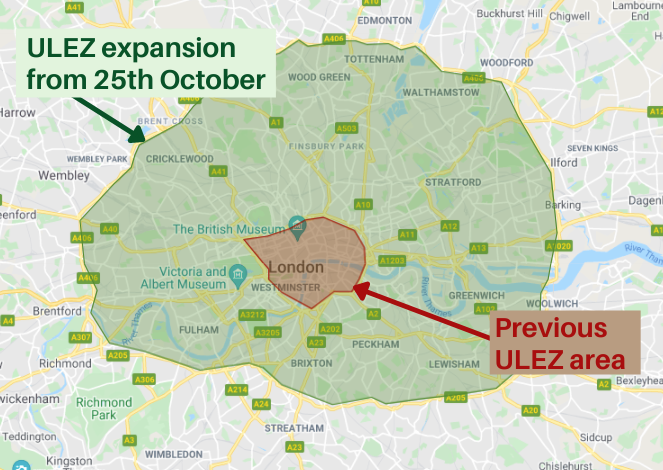 Graphic and map: Sarah Chaffey. Use our interactive map to see how you will be affected

But drivers with non-compliant vehicles are worried about how the expansion will affect them.

One London Assembly Member, Keith Prince, is calling for the changes to be delayed in order to allow Londoners to make plans and save up for compliant vehicles.

In a letter to the Mayor, he said: “London has faced uncertainty and economic damage from repeated lockdowns and restrictions as we battled the virus. It’s absurd to think that Londoners could have used this time to prepare for ULEZ expansion.”

Today I've written to the Mayor requesting that he delay ULEZ expansion until next year to allow Londoners time to recover and prepare.

Rushing the expansion so soon after the pandemic will be devastating for London.

If you want to know how you will be affected, the London Assembly website has guidelines here.