The 16th edition of the London Korean Film Festival will be held from 4 to 19 November and will be featuring more than 35 screenings across the capital.

Korea’s cinema and TV industry never stops growing, being recognised on the international stage with major events that have marked history. Those include legendary director Bong Joon Ho’s 2019 Oscars success with “Parasite”, to veteran actress Youn Yuh-Jung winning Best Supporting Actress at the 2021 Oscars and BAFTAs for her role in Minari (directed by Lee Isaac Chung). More recently, it is the phenomenon of Squid Game, which has become the most popular show in Netflix history. 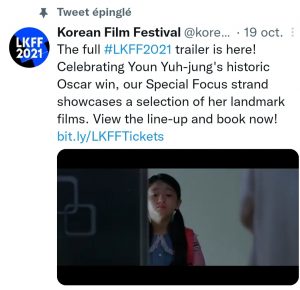 The festival will be offering a range of content, from the biggest box office hits, to woman’s voices, documentaries, independent cinema, animation, award-winning shorts as well as a special focus on actress Youn Yuh-Jung and her impressive career.

Over the years, the Korean Film Festival has built a solid reputation for itself, becoming the largest Korean film Festival in Europe, with the biggest programme dedicated to Korean cinema outside of the country itself.

Journalist Marion Pichardie will be covering the event, so stay tuned for updates!