Doubtlessly, the palm oil demand has surged in recent years. From soap to soup, almost everything in your home contains palm oil. The oil is plant-based, therefore, it’s seen as healthy and vegan but is it actually harmless?

Today, with more than 3.5 million Brits identifying themselves as vegans it is clearly seen that vegetable-based lifestyle is more popular than ever. Some claim that palm oil cannot be compatible with the cruelty-free lifestyle, while others think that since it is not an animal product, its use is justified. In The Guardian, George Monbiot defined palm oil plantations as “the greatest environmental disaster of the 21st century.” So, before jumping to conclusions, there are some facts that everyone – vegan or not – needs to know.

What is Palm oil?

Palm oil is an edible vegetable oil, derived from the fruit of palm trees, which grow mainly in Indonesia and Malaysia. It is found in packaged foods, makeup, household cleaners, toiletries, biodiesel, etc. However, it is also one of the world’s most hotly debated crops, concerning habitat destruction, loss of biodiversity, species extinction and widespread human rights violation. The Guardian reveals that over the last four years, the number of vegan products launched in the UK has tripled, with nearly one in 10 food brands. 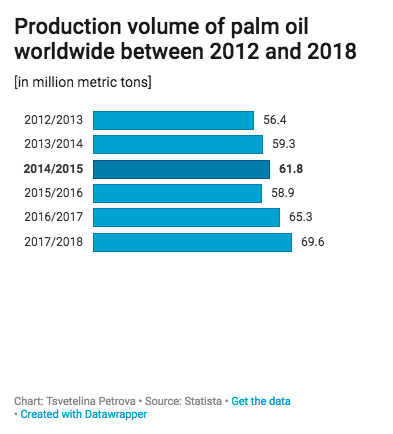 How does palm oil production harm the environment?

Palm oil production and deforestation go hand in hand. In order to produce a huge quantity of palm oil and to meet the rising demand, farmers have been clearing enormously big swaths of biodiversity-rich tropical rainforests in Southeast Asia. When making space for their massive palm plantations, they cause deforestation which is a significant factor in global warming. 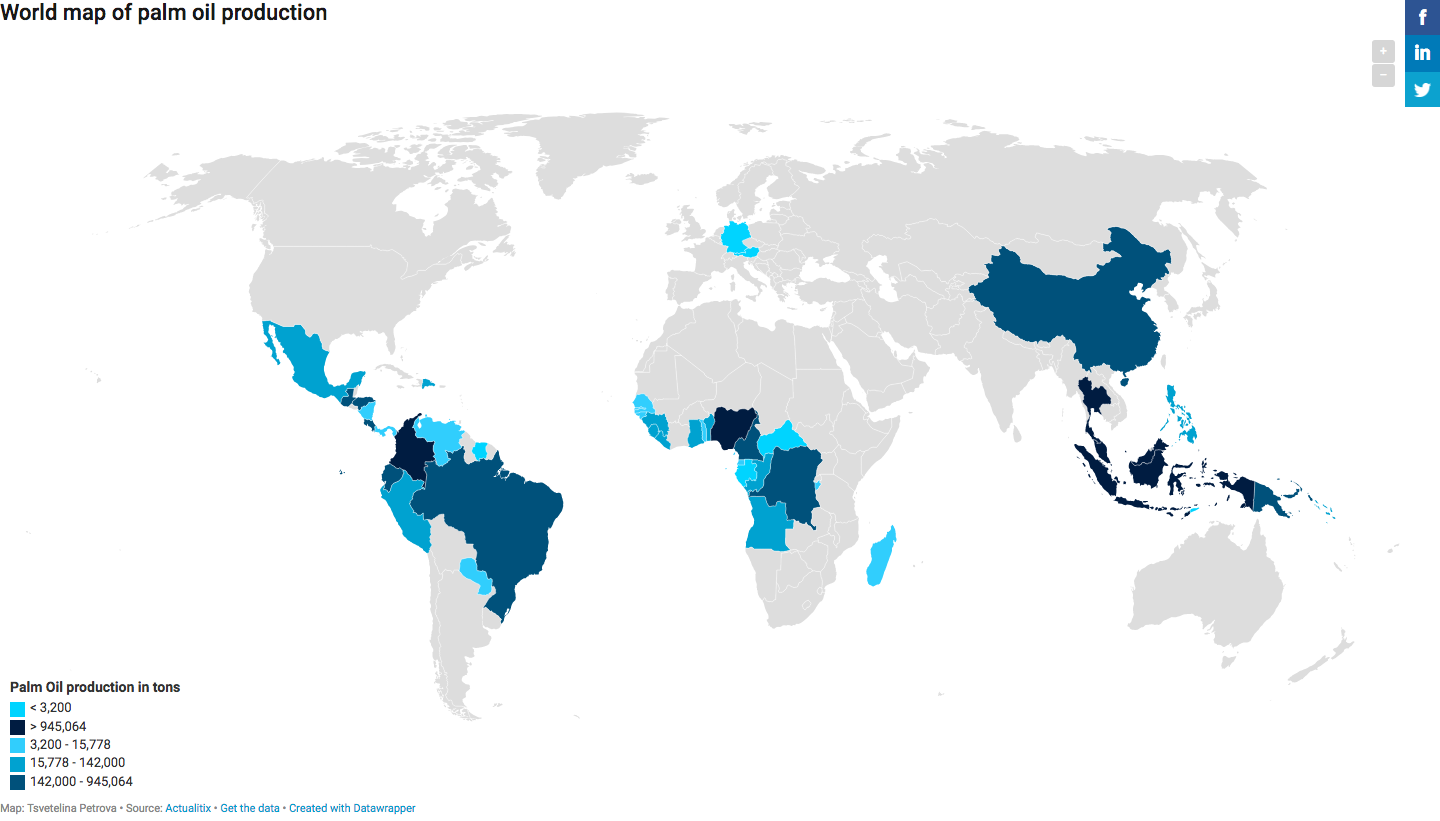 The most devastating practice for the environment is the intentional burning of timber and forest underground as an easy way to clear land for agriculture. In Indonesia and Malaysia, much of the land is on tropical peat soil. In fact, peatlands absorb carbon, so the clearing cause carbon releasing into the atmosphere, which contributes to climate change. According to the World Watch Institute, Indonesia emits more greenhouse gases than any other country, besides China and the United States, mainly due to palm oil production. 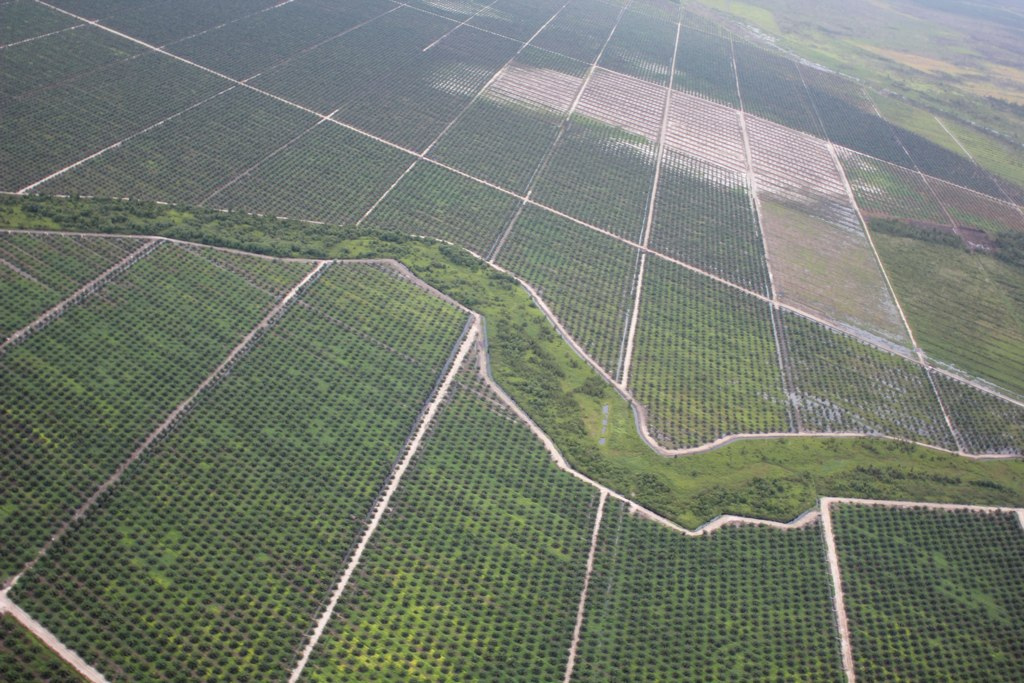 How does palm oil production harm the animals?

The destruction of native landscapes causes changes in the ecosystem that threaten the health and diversity of wildlife. Orangutans, proboscis monkeys, elephants, otters, pigs, crocodiles, and 90 different fishes are negatively impacted by habitat loss and environmental destruction caused by the oil-palm tree cultivation and its production. According to WWF, Indonesia and Malaysia produce more than 85% of the world’s palm oil and they are the only remaining home to orangutans. Their habitats are under constant threat of deforestation and fewer than 80,000 of them survived. In the last 75 years, more than 80% of Sumatran Elephants have been wiped out. While Sumatra is home to several of the country’s largest national parks, many areas in these parks are still being torn down—illegally—to produce palm oil. Indonesian tigers are now fewer than 400, as Sumatra island has lost 85% of its forests in the last half-century, again primarily due to conversion for palm oil and pulp plantations. 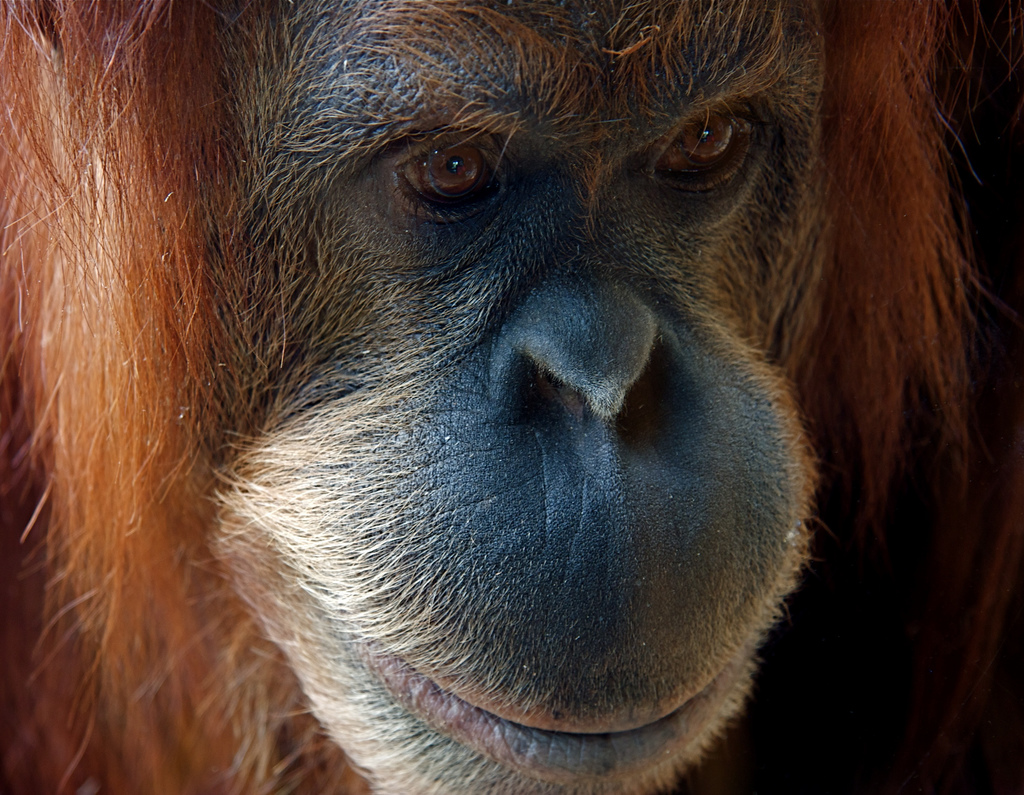 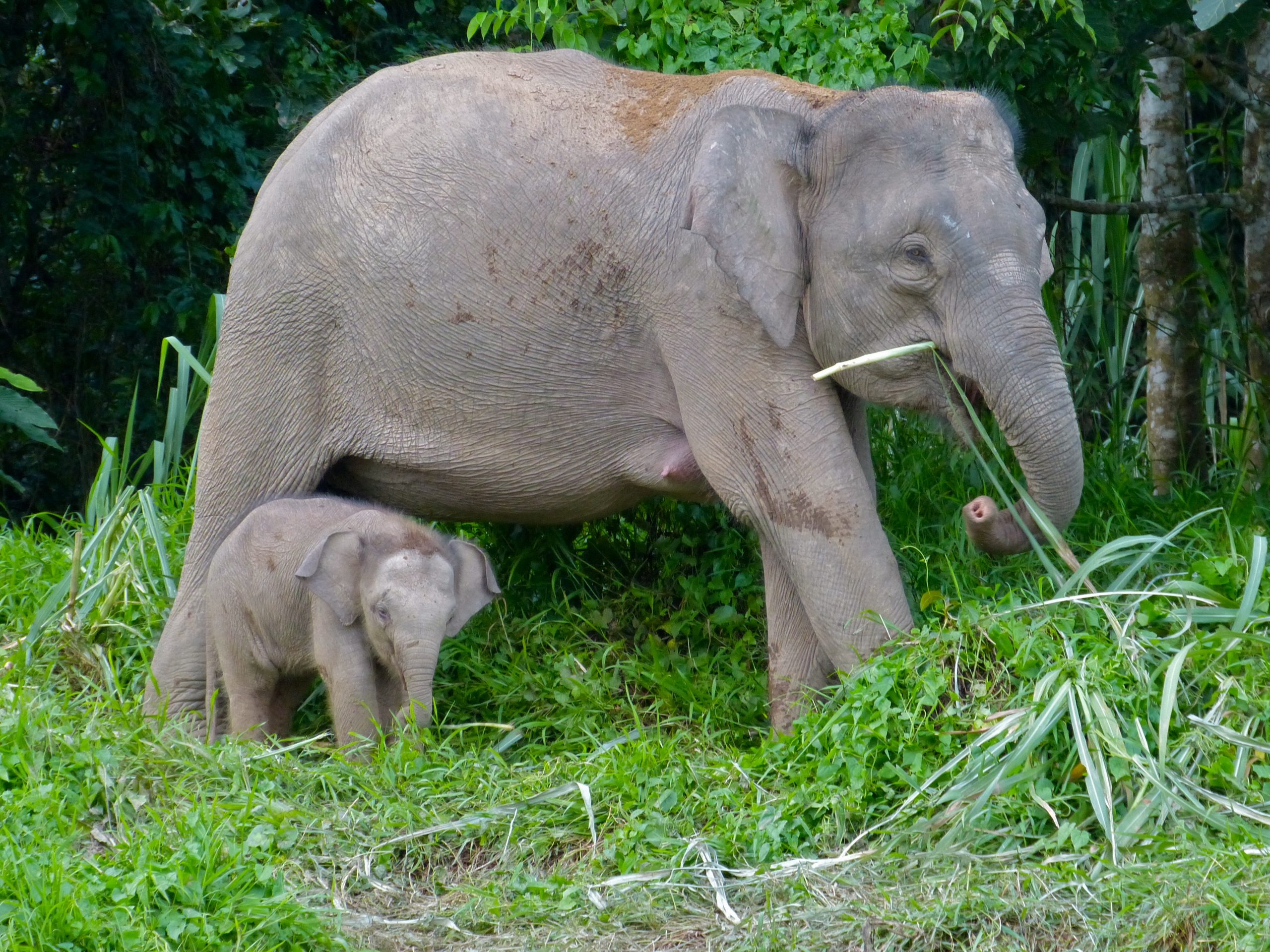 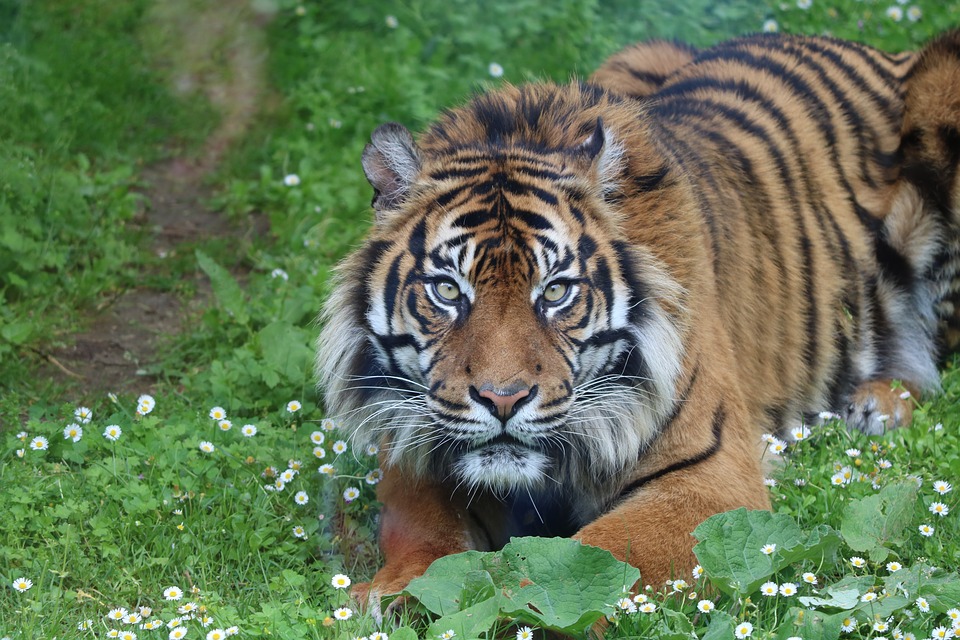 How does palm oil production harm the humans?

Doubtlessly, palm oil production provides employment to many people in Southeast Asia. The problem is that the industry has also been linked to major human rights violations and cases of child labour. Amnesty International’s report shows that children, as young as eight, are working in hazardous conditions in the palm oil production industry in Indonesia. According to Reuters, over 1.5 million Indonesian children are thought to be working in tobacco, rubber and oil palm plantations, instead of going to school.

What is the solution?

More and more companies are raising the awareness of rainforest destruction caused by palm oil production, and its devastating impact on the orangutans. A recent example is the supermarket chain Iceland that decided to ban palm oil from its own products by the end of this year.

Read more: Can wanting to save our planet be too political?

What can YOU do?

1. First and foremost, you need to educate yourself about palm oil and the habitat destruction it causes. Watch this award-winning mini-documentary “Person of the Forest” by Wild Films, that shows the reality of disappearing lowland rainforests of Borneo.

2. The easiest thing you can do is to avoid products which contain palm oil. Think globally, act locally – it is not so difficult!

These are the brands that use palm oil in most of their products: 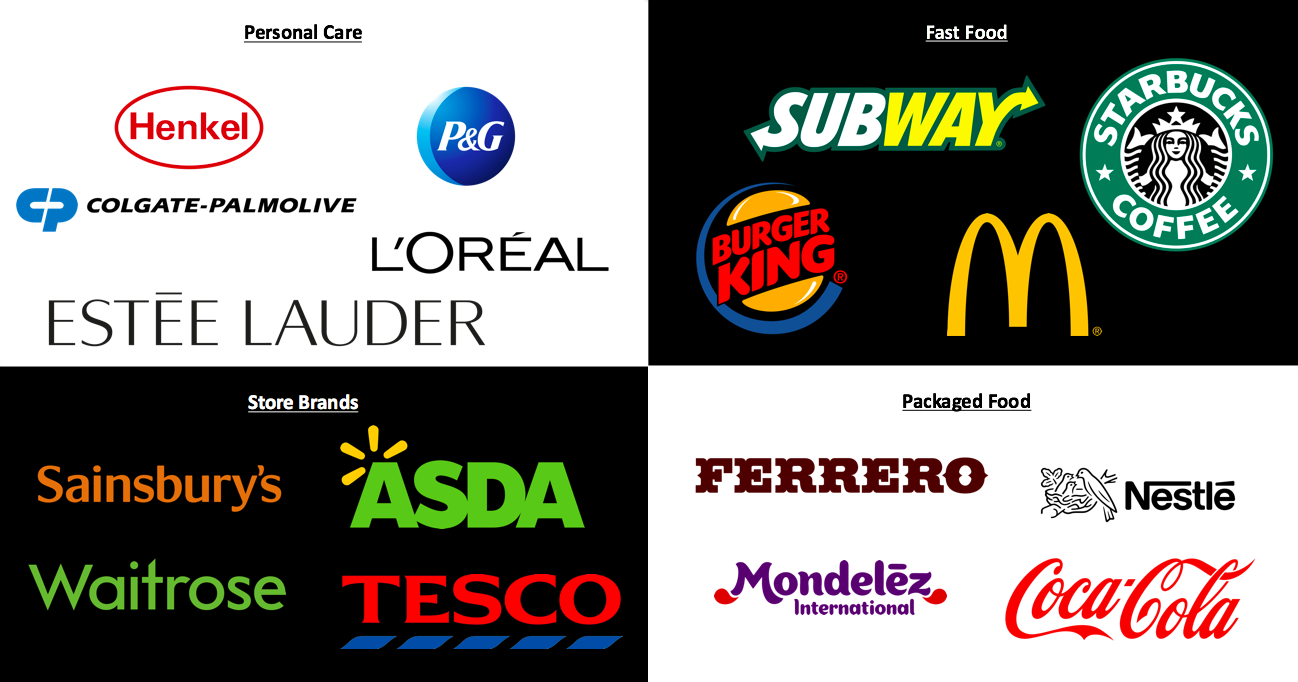 3. Volunteering is also a great idea! The Voice of London spoke to the volunteer Mell Johnson, who explained more about her experience in Borneo.