A recent survey indicates that job vacancies have reached their highest level since Covid-19 impacted the labour market at the start of the first lockdown, but there are still some disparities across different UK regions.

1.36 million jobs were advertised in the first week of November, according to the survey conducted by the Recruitment and Employment Confederation (REC).

The latest statistics show signs of the job market getting better, especially for those most affected.

One of the hardest hit groups has been young people, figures show that 174,000 fewer 16 to 24 year-olds were in employment in July to September.

However, research shows the recovery from Covid-19 is not evenly distributed across different regions and sectors of the labour market.

Six of the twelve regions continue to record fewer numbers of job adverts.

London’s labour market lagged behind with -18.7% fewer job vacancies than March. The capital’s declining job vacancies is happening against the backdrop of a rising unemployment rate in the city and increasing redundancies.

Job vacancies in The West Midlands increased from -18.5% in September to -9.3%, but this increase was not enough when compared to the other 12 regions.

Yorkshire & the Humber followed with -6.8% growth in job postings. 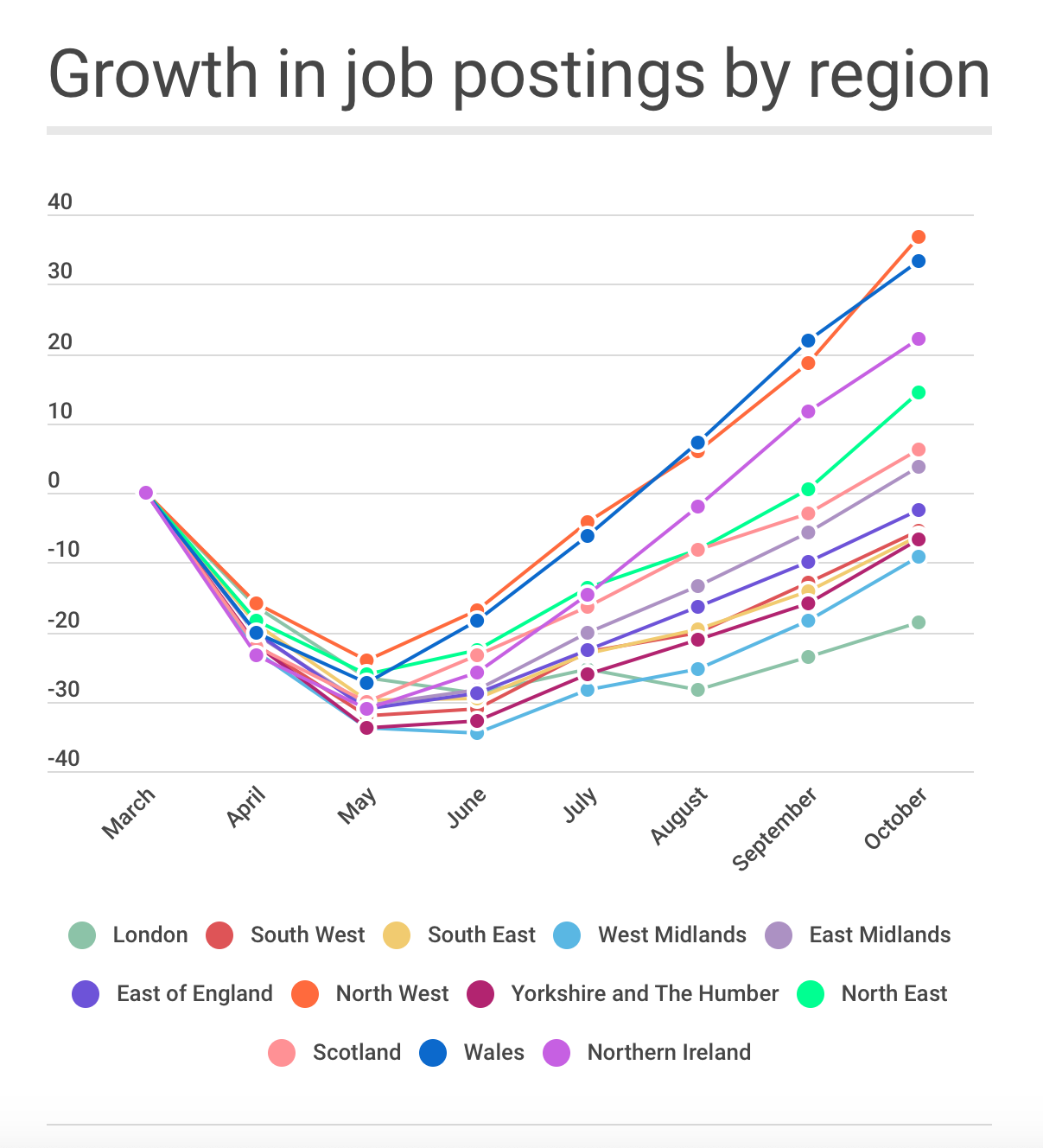 London’s labour market is still in recovery with -18.7% fewer jobs being advertised. Charts by: Leah Nelson | Data by: Recruitment and Employment Confederation

Though research highlights increases in job vacancies across the UK, the same cannot be said for certain job sectors.

Vacancies in hospitality and leisure sector remain at significantly lower levels than in March.

Job openings for bar staff are down by -48.7% while vacancies for sales and retail assistants are up by 4.3%.

Seasonal demand will also have affected these numbers, as the retail sector prepared for Halloween, Black Friday and Christmas.

Job’s which are predominantly held by young people, such as hotels, restaurants and tourism are likely to see a slower recovery rate because of the on-going lockdown, and quarantine restrictions.

It is possible that many people will need help transitioning into a new role or industry. 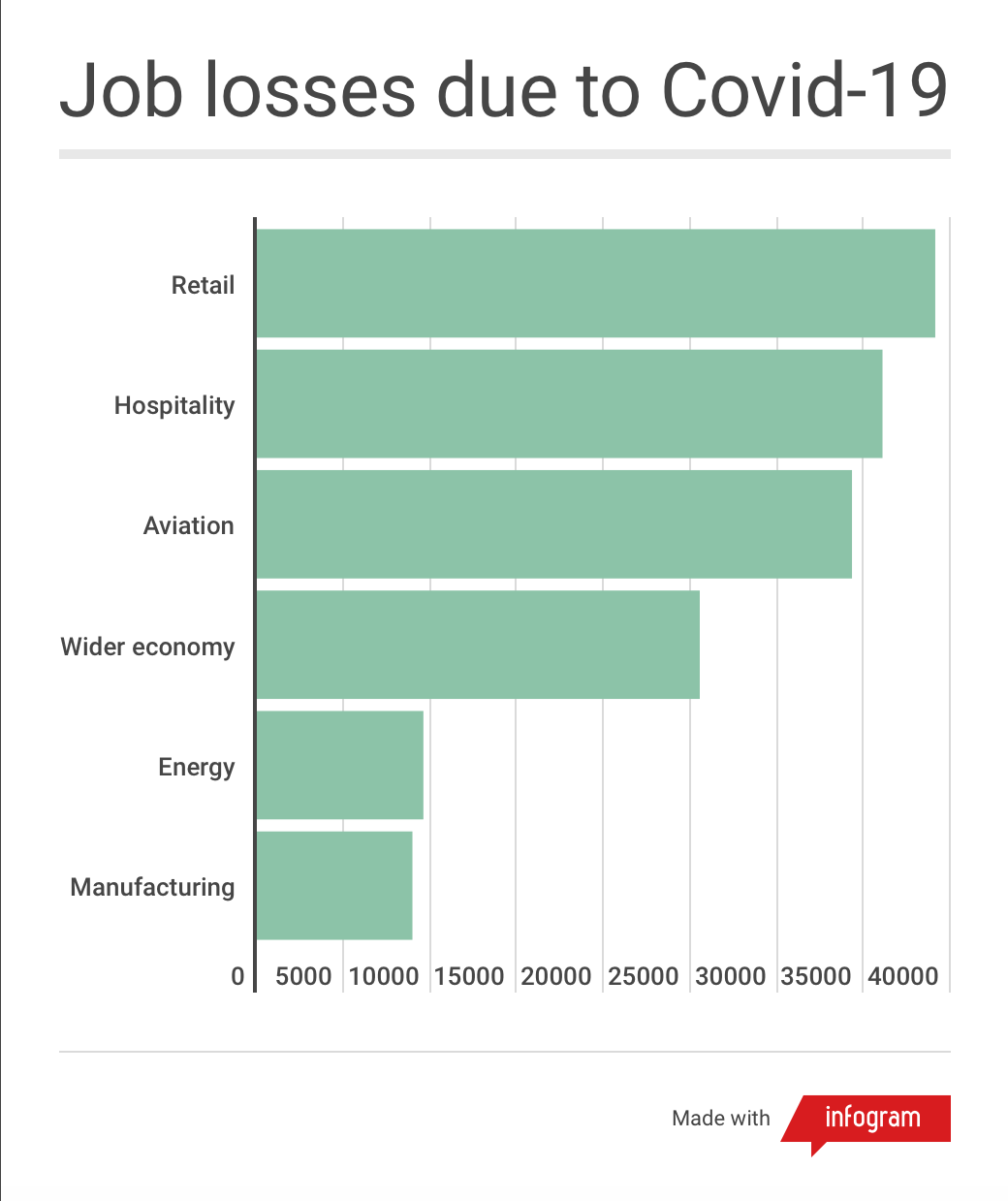 The retail sector has been hit hardest by the pandemic as a result the nation is seeing a rise in unemployment amongst workers under 25 who are twice as likely to loose their job. Charts by: Leah Nelson | Data by: Recruitment and Employment Confederation

Neil Carberry, Chief Executive of the REC, said: “Unemployment and redundancy numbers earlier this week showed that this is a tough moment for our jobs market. But we also know that there are always jobs being created by those businesses who can, and as this data reveals, there is hope to be found in many places and sectors.”

“What we need to do now is support businesses who can to create jobs, and help people who have lost work to transition into those new roles. Recruiters, with their intimate local and sectoral knowledge, can play a central role in this effort” – Carberry continued to explain.

What is the Kickstart Scheme?

How does it work?

How can you get involved?

Get all the answers here: https://t.co/bfrvuOBoPl