The nationalist Sinn Fein party boycotted the assembly beforehand along with the Green and Alliance Party.

This left the Democratic Unionist Party wholly reliant on the nationalist Social Democratic Labour Party to be present in the sitting, in order to pass the pro-life bill, due to the Northern Ireland Act of 1998.

Instead, the SDLP left the assembly and in doing so made it impossible for any proceedings to take place.

With the DUP unable to pass any legislation to block the new abortion laws, they too exited the assembly in defeat.

Unable to form a sitting assembly to oppose the Westminster legislation by the deadline, abortion became decriminalised at midnight on Tuesday, marking a significant date in Northern Ireland’s history.

A region where abortion laws had remained unchanged since 1861. It joins the rest of the UK where decriminalisation laws have been in place for the last 51 years. 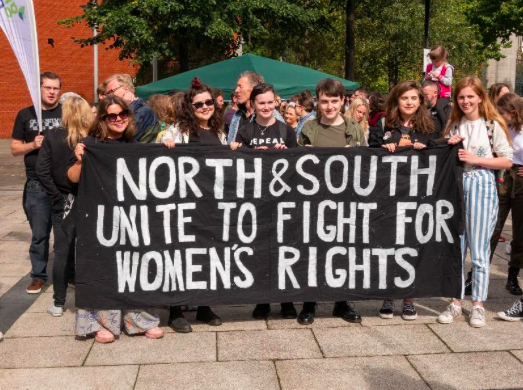 Joyous pro-choice advocates were heard cheering outside Stormont, behind devoted pro-life advocates firmly presenting their sentiments through “Not in Our Name” signs.

Kerry, a mother of two from Antrim, said: “It’s about time, but it’s a sad day when you realise, we had to have Westminster kind of force us to do this.

“A basic right for women somehow still facing opposition in 2019? What does that say about Belfast, Northern Ireland at that?”

Rebecca, of Londonderry, said: “Abortion is murder, it’s that simple. All the science today shows that that a baby is an individual.

“You can convolute the situation, or story or context as much as you want, but at the end of the day, that’s a baby that no one has a right to kill.

“I’m not even religious, but I can tell you, trying to choose when it goes from killing a cell to killing a person, is playing God.”

Earlier this year, legislation passed in Westminster stating that abortion would automatically become decriminalised in Northern Ireland unless its devolved government was restored by October 21, 2019.

Prior to this, abortion had only been possible if the mother’s life was in jeopardy. Or permanent and significant danger was posed to their physical or mental well-being as a direct result of the pregnancy.

Looking into the future for Northern Ireland, Tim, a Queens University student, summarised his view on the day: “Whilst I’m happy to see NI following the progressive trajectory of the rest of the UK, the underlying problem behind today’s shamble is that no matter the issue at hand, topic or anything, NI politics will always revolve around nationalists versus unionists.

“Even if parties agree on an issue, they will fight it out to hinder the other.”