If you’re a woman on the Internet, chances are you’ve had someone slide into your DMs with messages ranging anywhere from slightly uncomfortable to downright vulgar. Why haven’t these people taken the hint yet?

The Internet is a wonderful invention that helps keep the world connected. With different messaging apps, we can keep in touch with our friends and family no matter how far away they are. We can even meet different people from all around the globe and form meaningful relationships without ever meeting face-to-face.

But of course the Internet does come with its pitfalls, one of which is the anonymity it provides.

It’s not an uncommon occurrence, especially for the women of the Internet: some unknown person sending you a direct message. Sometimes these messages are harmless, a simple compliment or innocent message. But with the safety barrier of a screen to hide behind, some people become emboldened to say bizarre and even aggressive things. 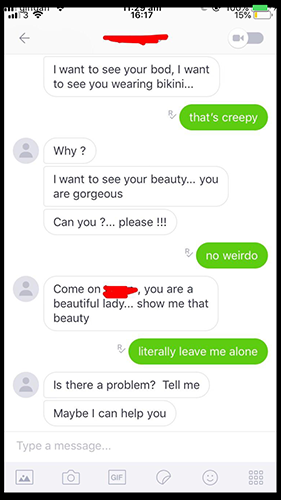 Things that any reasonable person would never say to your face, suddenly seem acceptable for them to type out in a DM (direct message.) When meeting someone in person, no one would find it acceptable for the first thing to come out of your mouth to be a request for nude photos. But somehow, some people think this is passable online.

And it’s not as if these creepy DMs are an outlier on the internet. They’re so common that there’s a whole page on Reddit called r/creepyPMs with nearly 450k subscribers dedicated to sharing screenshots of messages users receive. From Tinder to Instagram and even to Words With Friends, nowhere is safe. 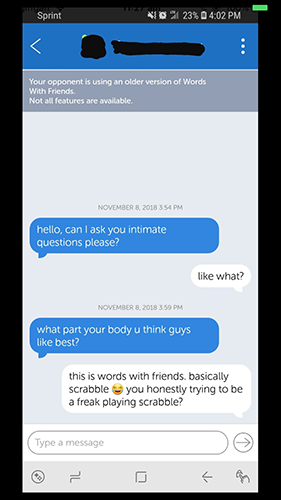 Most people will agree that these kind of vulgar messages are unacceptable and rude. Just as no one would really argue that these messages asking for nudes, sexual favours, or anything else explicit, aren’t harassment.

But where the danger lies is in the more grey areas. Much like cat-calling, some people may defend these types of messages or dismiss them as innocent. 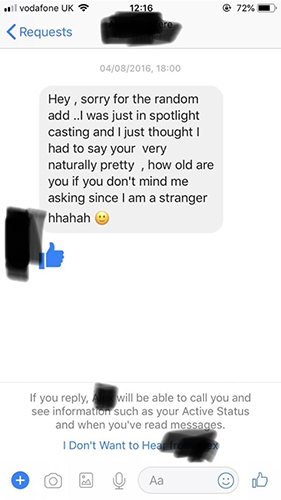 For example: this DM, anonymously submitted to Voice of London, was sent to a girl after someone had overheard her name at a casting call. While the content of the message itself is relatively harmless, the girl never consented to this man contacting her. She hadn’t given him her name or phone number; rather, he had looked her up on Facebook after noticing her and listening to hear what her name was. Messages like these make women feel less secure and safe when they’re out and about. By just hearing their name, they can be found online. 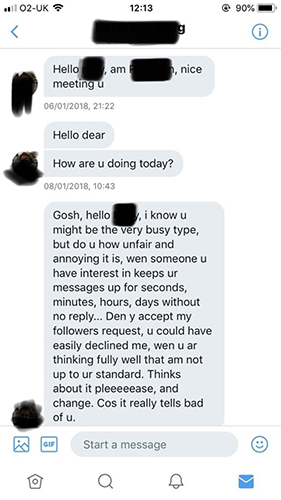 The above message, also submitted anonymously to Voice of London, is another example of DMs others might find harmless. Again, nothing explicit is said. However, the entitlement this person felt to a response is just as harassing. The time stamps on the messages show a persistence over several days. Ultimately, the sender turns around to criticise the person receiving the messages when they don’t get a response.

This isn’t something uncommon either — people lashing out at the person they’re messaging when they don’t get the response they want.

What’s important to note is that a direct message doesn’t have to be explicit or criminal to be harassment. These people may not think they’re doing anything wrong. They may even think they’re being suave, sliding into DMs and messaging girls. But the bottom line is many of these messages are unwanted, unwarranted, and unpleasant to receive. 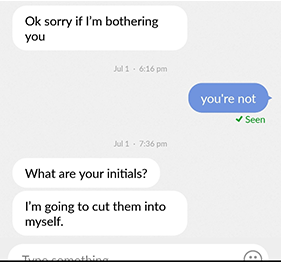 Of course, this isn’t to say you can’t reach out to people you don’t know on the Internet. Part of the joy of the World Wide Web is the way it brings us all together. But if you wouldn’t say the things you’re typing to the person’s face or if you wouldn’t want your mother to see the message, chances are you shouldn’t say it. 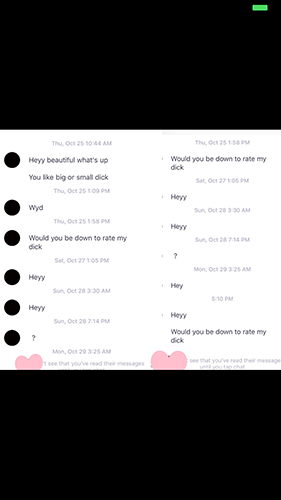 All it takes is one message for someone to feel unsafe or uncomfortable. Just one message from one stranger could ruin so much for someone. So before you send that message, before you add that person on Instagram, maybe think about your intentions.

Think about how that person might feel to receive the message you’re about to send.

Have you ever gotten an uncomfortable DM?
Created with Survey Maker