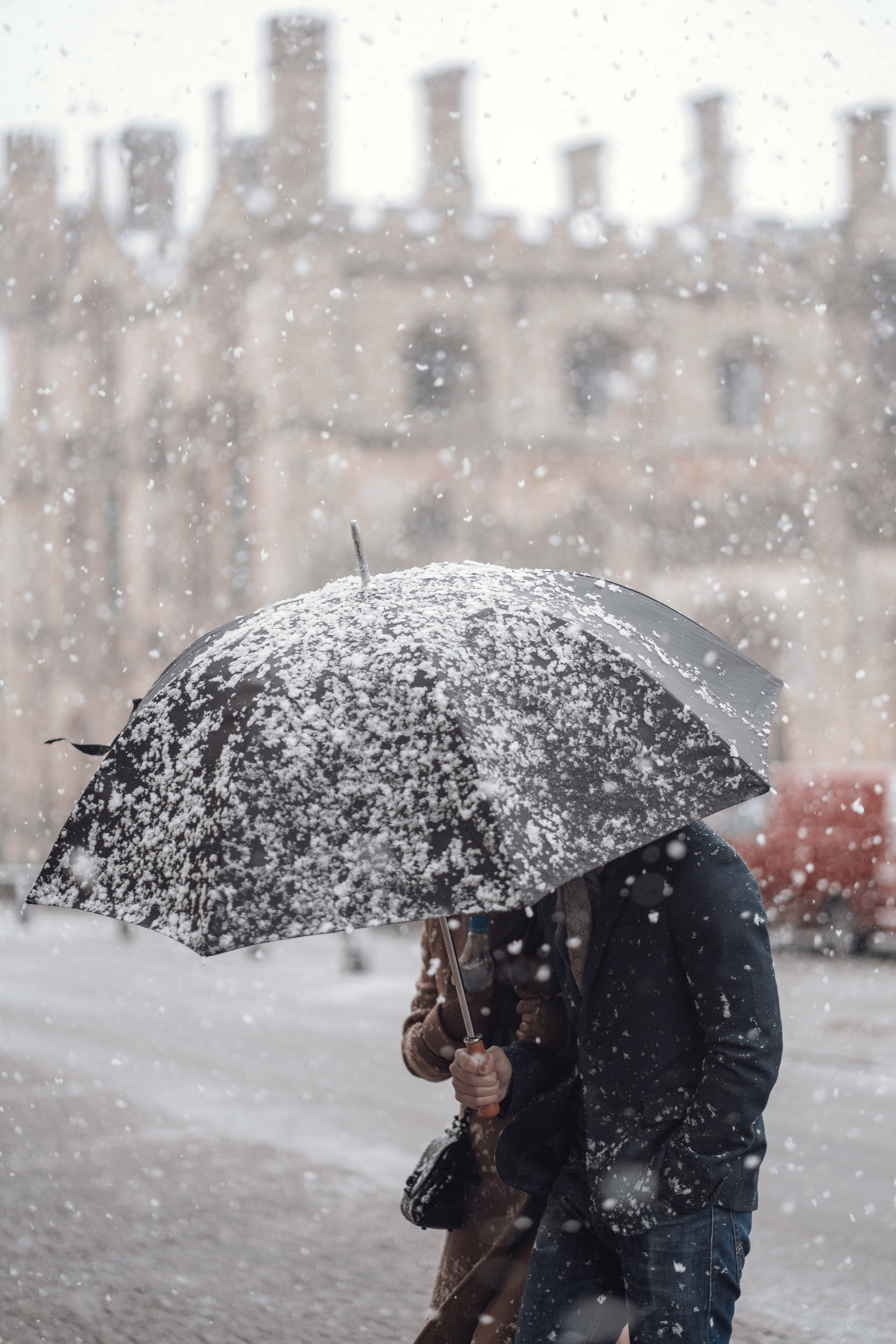 Winter is coming. Source: photo by Craig Whitehead on Unsplash

Last winter (2017/2018) had the highest figure of excess winter deaths (EWD) with an estimated amount of 50,100 across England and Wales, the highest number since 1976. Respiratory diseases were accounted for more than a third of the deaths (34.7%), data revealed. 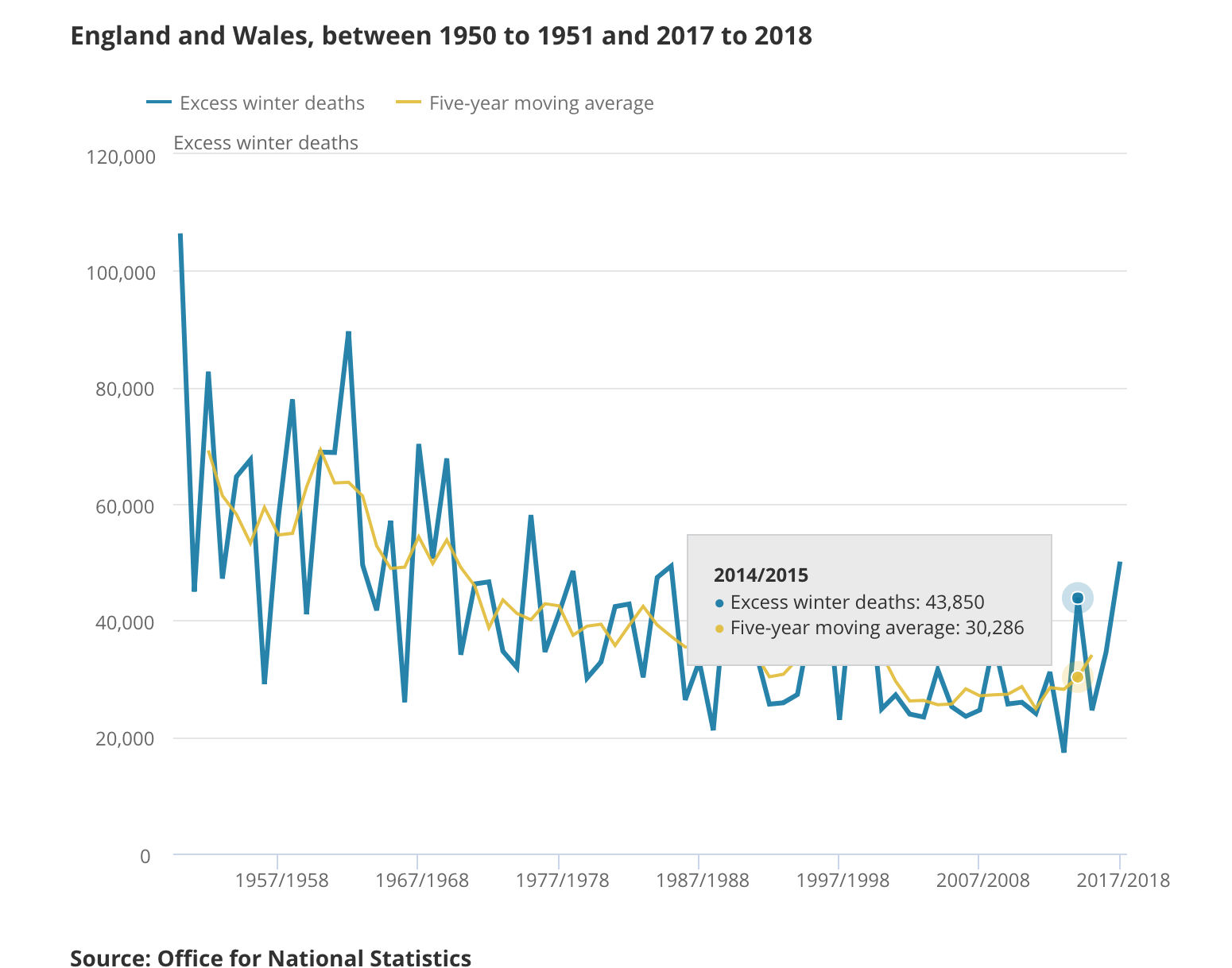 Nick Stripe, the Head of Health Analysis and Life Events at the ONS, said the main strain of flu, and low winter temperatures could be the reasons for causing the increase of the EWD numbers last winter.

Department of Health and Social Care told Voice of London regarding our questions upon the issues: “As the ONS says, these figures were likely the result of flu and cold weather and we know flu is difficult to predict – that’s why this year we have a stronger vaccine for over 65s and have made more vaccines available than ever before. We have also backed the NHS with an extra £420 million this winter to redevelop A&Es, improve emergency care and help get patients home quicker.” 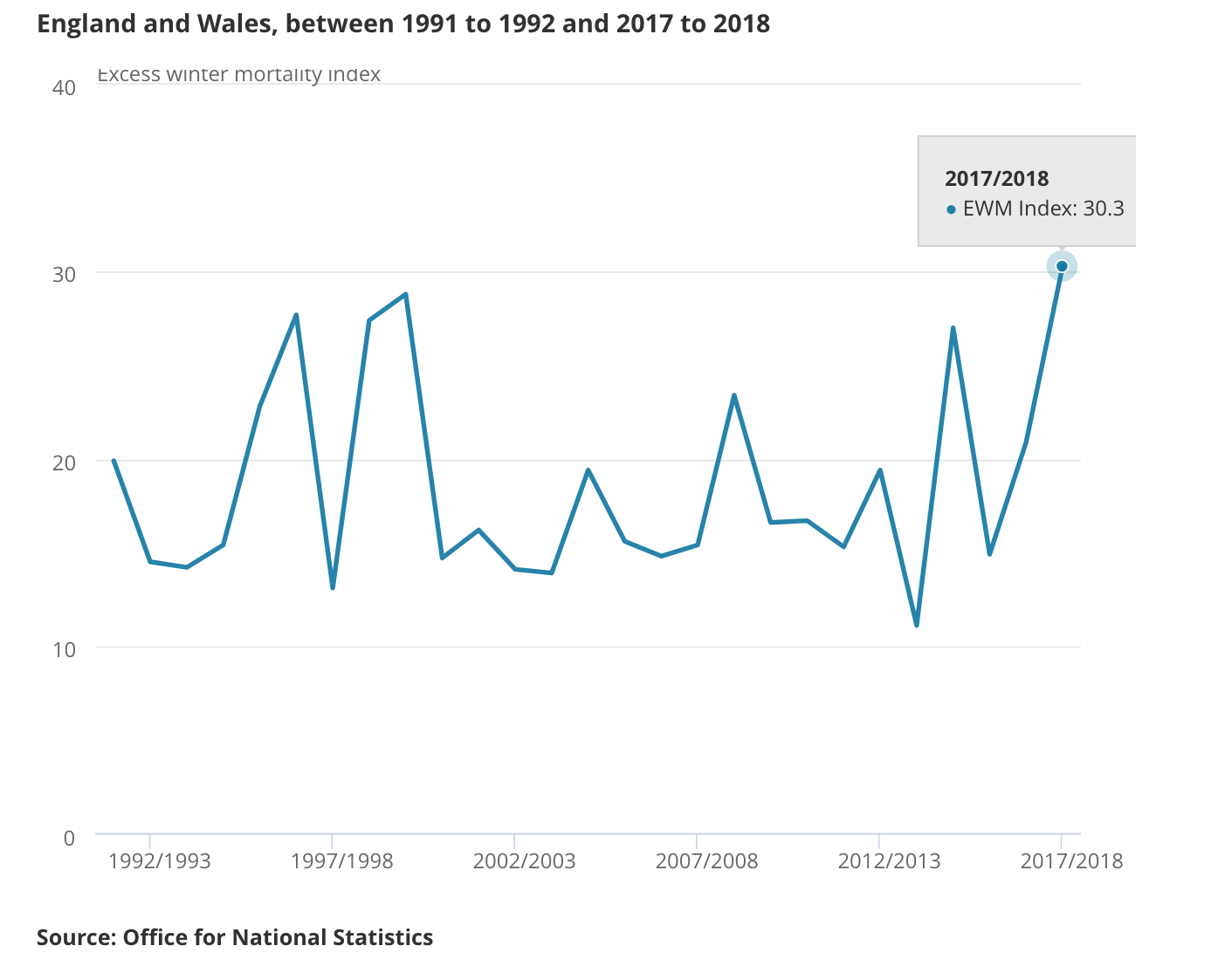 The excess winter mortality index last winter was 30.3%, meaning that 30.3% more deaths happened in the winter period compared with the non-winter months.

The statistical bulletin shows that the elderly and women were the most affected group. Excess winter deaths are higher in the female group than males in general. More portion of women aged 85 contributed to the phenomenon; 63.9% of the excess winter mortality figure population that is aged 85 years old and over are woman. 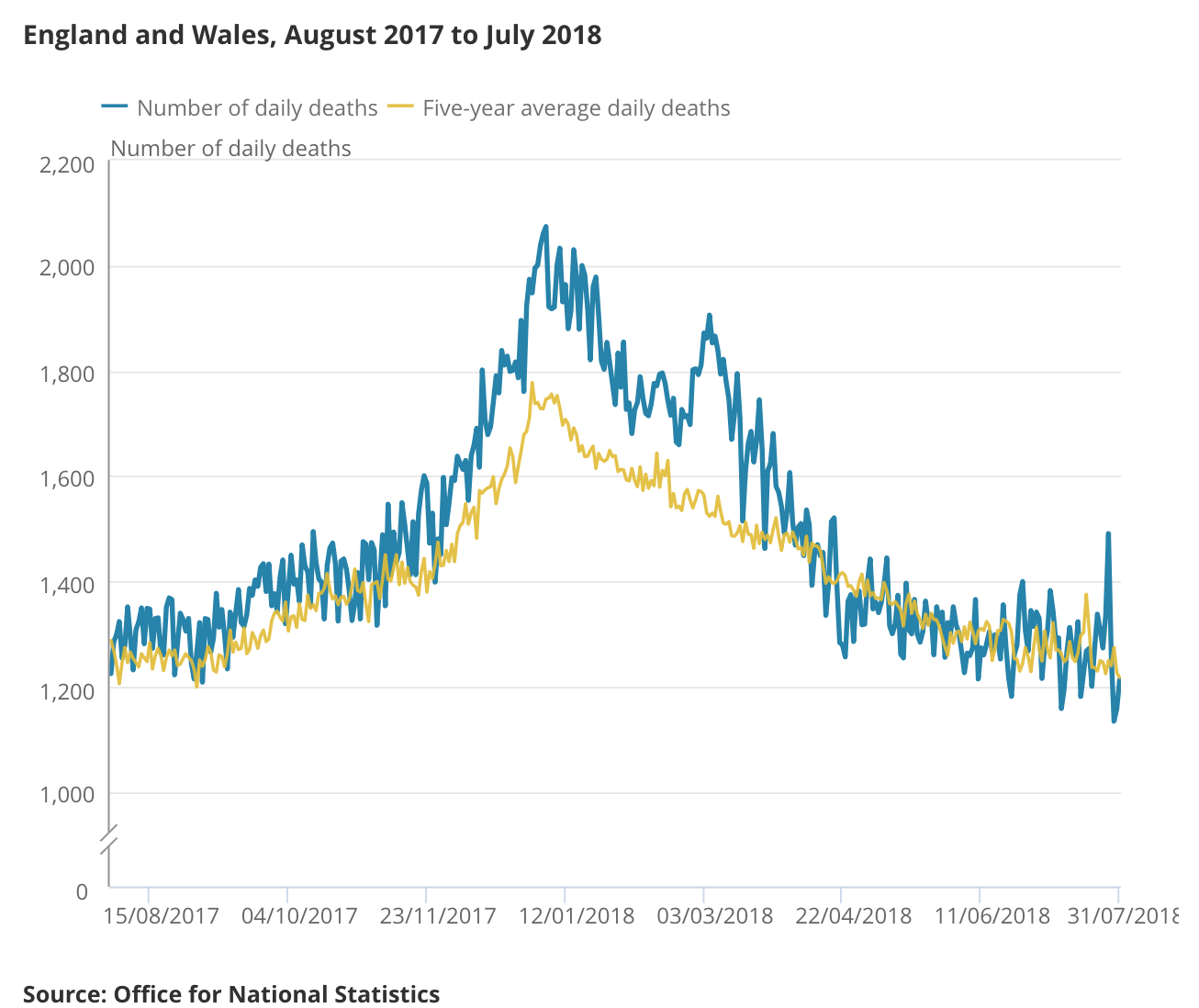 From 2017 December to early 2018 March, the daily deaths exceeded the five-year average numbers on all dates. 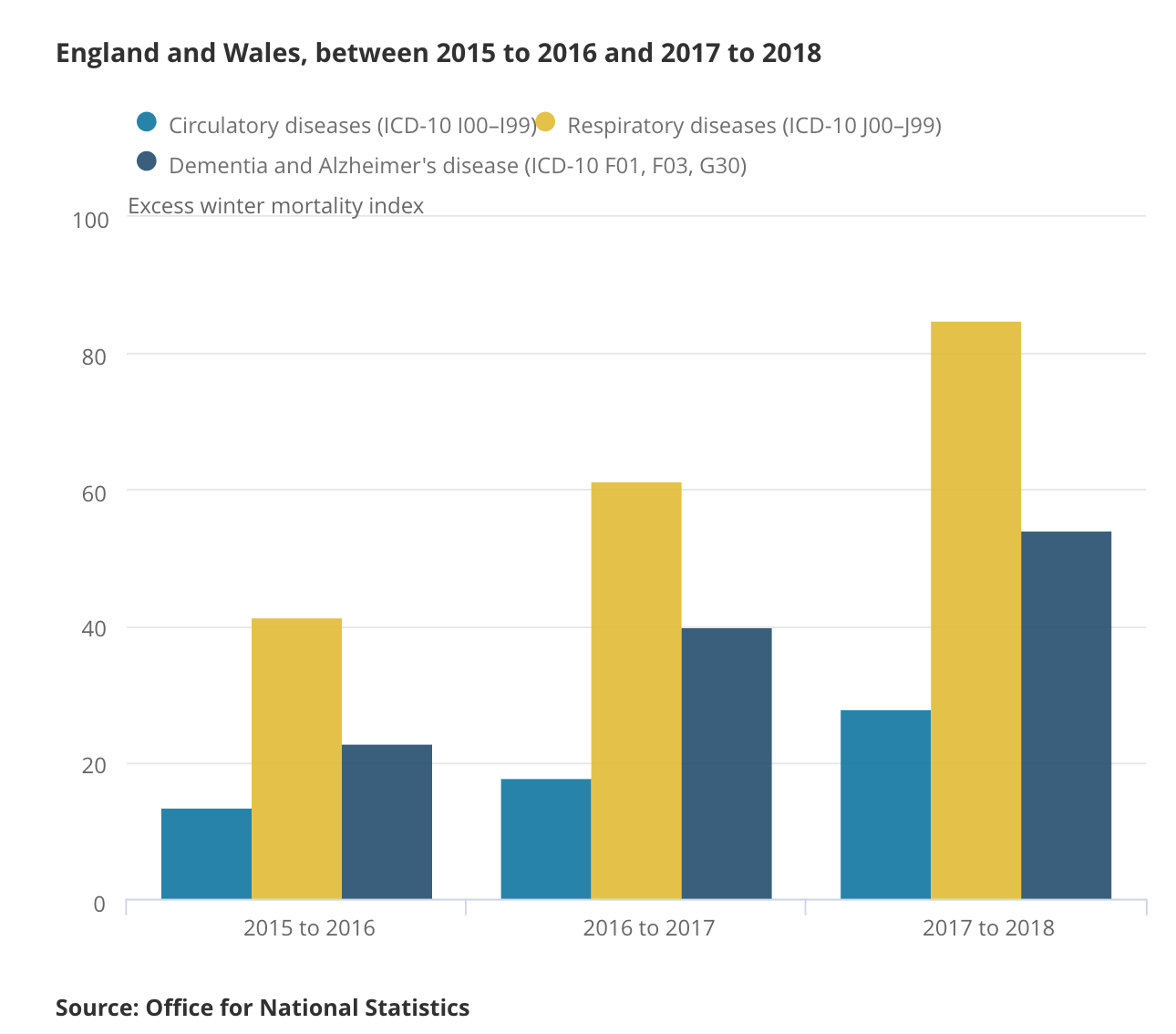 Excess winter mortality index by underlying cause of death

Respiratory diseases have been the biggest cause of excess winter deaths in the three recent years.

James Watkins, the NHS Desk officer from the Department of Health & Social Care, also stated to us that