When Andrew WK came to London we hung out with him backstage. Little did we know, it was going to be the best conversation The Voice of London has ever had.

Welcome back to the UK, how’s it been so far?

Last night was a great way to kick off the tour, there were many technical challenges that were frustrating but there’s even a strange satisfaction in solving problems. You don’t want to enjoy it too much because then you’ll feel you almost subconsciously will have more problems coming. But there are a few more satisfying things than having an issue which we don’t even call “a problem”, just “a situation” and be able to address it.

Did they happen on stage or during soundcheck?

Both. There’s so much to do to make it seems like you’re doing nothing at all. Much like a movie. There’s so much happening behind the scenes at so many levels, so that the audience, the viewer, the person that you present the unique experience to, has no idea of any effort or any manipulation, or any design so that they can experience as natural and pure and directly as possible. That’s the most important thing to me. It’s very challenging but also very rewarding, and many issues we were dealing with last night, we solved them almost in a magical way right before we went on, literally within a few moments. I have an incredible team of people and that’s what I think about most, these situations make me think about how lucky I am to have the people around me that I do. 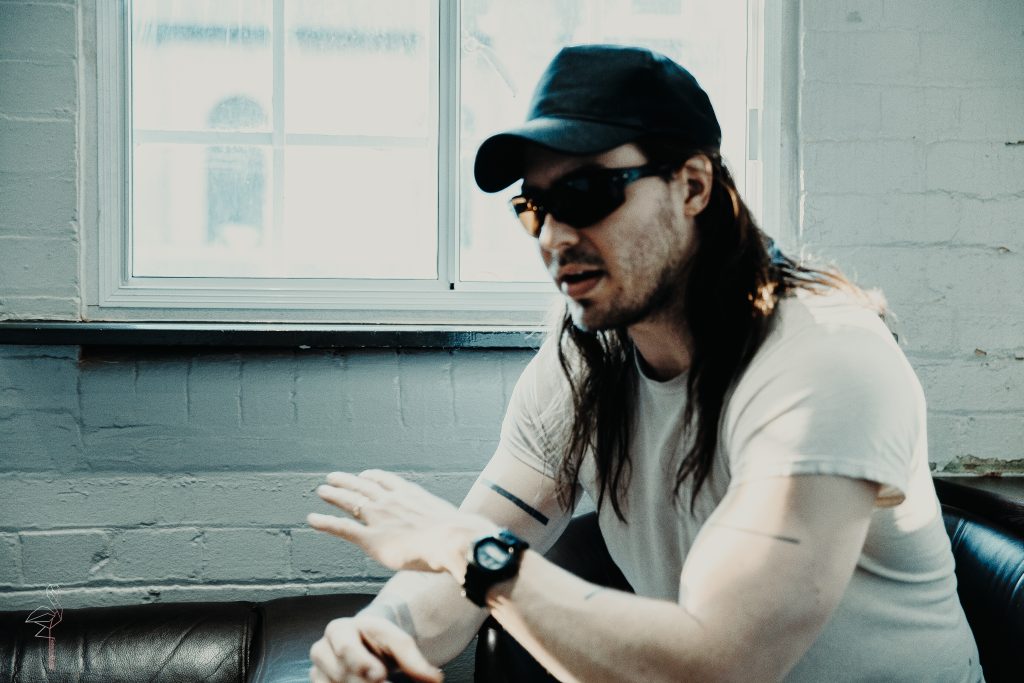 You’ve always had the same team?

Some of them have been there since the very beginning, some are more recent, some have come and gone.

It seems like you have a special connection with the UK, what do you like the most about this country?

We haven’t played an headline tour since 2012, six years ago. What many people may not realise, sometimes even I forget to acknowledge that we launched this from the UK. The first concert we ever played as a band was in London. Many people don’t know that. The record came out here before the rest of the world so this all endeavour began in the United Kingdom and that was a decision made by the label and my management team and myself. I had never been hear before so I had no way to predict what it would be like but I followed these instincts and the ones of the other folks, I don’t know if things continued to go as well as they have here but maybe it has something to do with it or maybe England seems to like what I am offering.

Is there anything that you don’t like about the UK?

Food’s scarcity. It’s gotten much better over the years but I think in the United States we’re spoiled that you can get food at any time of the day any where you are. Here, it can be sometimes harder to find food especially at late nights, so after concerts, often times there’s just no food, it doesn’t matter how badly you want food, there is none to be found. But have learnt from that, we planned and we brought food in case. But again, it has gotten better, there’s more food available at more hours now across all of England for my experience. And more choices within what’s available. So even if you go to a gas station, it’s not just scotch eggs and meat pies, which I do really like. I am giving you guys a lot of credit for improving your food situation.

When playing London. How do you feel?

Many of the people that we work here are based here so there’s expectations beyond the show of those we work closely with, wanting to do a good show for them or wanting to give them whatever they’re looking for. Many places we play, even if there’s a good turnout, it’s a big show. It’s always for the audience, the atmosphere changes.

You’re playing Download very soon. How are you preparing for it?

It’s the second time playing and I don’t know if we’re playing the same stage. We really had one of the best situations last time because we were in the tent. Even if it was during the day, we had lights. Personally, I don’t like playing outdoors during the day because there’s no lights and so much of the intensity and dramatic emotional atmosphere and feeling of a show disappear. When there’s no lights, it’s just sun, it’s a different kind of concert. It can be very good, a lot of people seem to enjoy shows like that. I really loved that they gave us that indoor stage at Download so we did a full light-show. I don’t like to see the venue, I like to see the blur of outer space. You can’t see where the ceiling is, you can’t see where the walls are, it’s total blackness with people and lights. That’s an incredible feeling. If I can see the bar, the wall, the ceiling above me, you’re too aware of where you are in a way that I find it to be disturbing.

That’s why I play at night time. The night will give you a different feeling. That’s why last time was very magical. We got that special spot. With that being said, this time might be magical because it’s different, it’ll be a contrast. There’s certain times where you’re outdoors and you can see the experience of the crowd better because of the sunlight, you can see unique elements.

“You’re Not Alone” is your new album, what is the message behind it?

There’s many messages. If I had to pick one it would be “life is worth living if you decide that it is”. I am saying that to myself more than anyone else. I wouldn’t dare necessarily force that message. I wonder this a lot actually, when people are making their work, the creative statement – are they making it to someone else or are they making it to themselves? Are they saying that to themselves? The ones who need to hear that message. It’s something I realised about my work. I am saying all of it to me. It’s not how I feel, it’s how I want to feel. It’s how I wish I felt. I am not partying, I wish I was partying. So I am going to make a song about partying to get myself to that place. It’s aspirational music to myself. It’s self-directive. Maybe someone else doesn’t want to hear that message, maybe I have no business telling them how to feel or what to think but I am trying to make myself think that life is worth living, I am trying to make myself feel better, I am trying to generate these positive perspectives an attitude in myself because I haven’t been there. I am coming from a deficit of positivity. I am coming from a lack of empowered attitude and trying to make music and work and a project to focus with all myself that it’s about those feelings so that I can become what I think would be a better person. 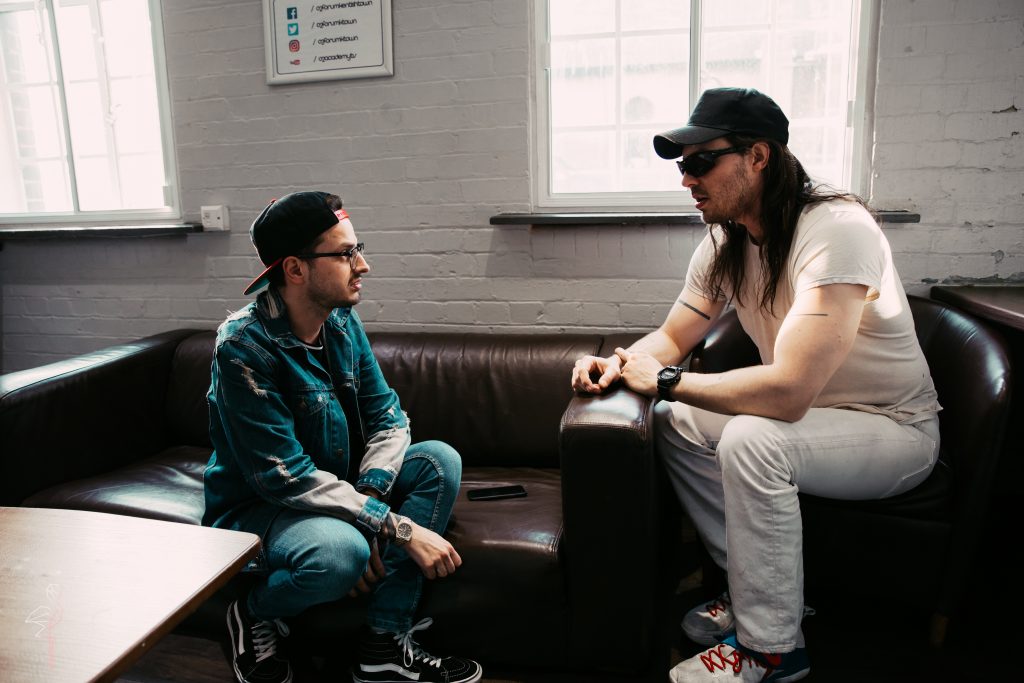 What was the process behind it?

We did a lot of different eras of the albums. Some tracks are dated back to 2005. Some of them we tried recording them in a very traditional studio environment in Texas. I tried to break a lot of my traditional recording approaches and patterns and intentionally do the opposite of what we normally do. Force myself to work in a different kind of way. Almost all of that failed. Some of those attempts produced great results. But I also learnt from these experiences. I learnt that I work the best by myself. There would be periods where other folks are involved especially during mixing and during other portions of the album making process but in terms of making the songs and recording the instruments I just have to do it by myself. Some of the most amazing things happened when I tried different approaches to this album, sometimes you need to trust your instincts. Sometimes you have that if you jump off the cliff, you will break your leg, sometimes you just have to jump off that cliff to prove yourself “wow , I really did break my leg just like I thought I would so now I really won’t jump off that cliff next time”. You can understand something but you can only truly know it through experience.

You’re Not Alone is out now.