Pop punk heroes State Champs have released new song ‘Mine Is Gold.’ The song, which originally premiered on Billboard, is taken from the bands new album Living Proof  out June 15, 2018 on Pure Noise Records. Pre-order is currently available for the upcoming album via the label’s site.

You can listen to ‘Mine Is Gold’

here or by clicking the image below.

The song is about being bullied and doubted – singer Derek DiScanio explains, “If you’ve ever been betrayed, bullied, or doubted by someone close to you, “Mine Is Gold” is for you. This one hits home for us in a range of ways and gives us a sense of pride after the musical risk we took on the chorus of this song especially. We took a lot of influence from bands like Cartel and Saves The Day on this song and the way they can shape dynamics and changes in energy.”

As well as releasing ‘Mine Is Gold‘ State Champs have announced a headline UK tour this October with support from Seaway, Stand Atlantic and Woes.

“After a long cycle on Around The World and Back, we’re excited about being back to Europe with Living Proof out in the world. We’ve got a whole new batch of songs, bigger and better production than we’ve ever done, as well as a new attitude. Europe has always proved to us that it is a place that loves Champs and we fully recognise and appreciate that, which is why we will never stop coming. See you soon!” says bassist Ryan Scott Graham.

You can see the band at the following dates:

Tickets on sale
Friday 1st June at 9am

You can watch State Champs’ previously released video for “Dead And Gone” taken from Living Proof HERE and listen to the track “Crystal Ball” HERE.

Over the past decade, Albany, New York’s State Champs have become a major player in the world of pop-punk, helping define the shape of the genre for a new generation of fans. And on June 15, Living Proof will push pop-punk forward.

Formed in 2010 by vocalist Derek DiScanio and guitarist Tyler Szalkowski, the pair began laying the foundation of State Champs in garages and basements throughout their hometown. The band’s lineup would shift a bit, but DiScanio and Szalkowski were always at the helm, crafting the band’s 2013 debut, The Finer Things, along with guitarist Tony “Rival” Diaz and drummer Evan Ambrosio. They’d add bassist Ryan Scott Graham the following year and, in 2015, they’d release Around The World And Back, a record that elevated State Champs to a frontrunner in the genre.

The band’s third album, Living Proof, will be released June 15 on Pure Noise Records, and it’s the most ambitious and cohesive work in the band’s catalog. “It was like, let’s take as many swings at it, try as many new things and experiment, until we get to the point where we could start searching through it all and then find the album,” says DiScanio of the writing process. After touring for Around The World And Back wrapped, the band returned to Albany, headed back into the garage, and started writing songs for what would become the framework for Living Proof. Getting back to their roots paid dividends, as the band had a new batch of songs ready, and once they linked up with the album’s producers, they wrote even more.

Living Proof was recorded in two different sessions with different teams assisting the band. The first session saw John Feldmann producing, who brought his knack for writing hit records—which he’s done for bands like Blink-182 and Good Charlotte—into the fold. But State Champs wouldn’t let their old-school roots die, teaming up with Mike Green and Kyle Black, the pair that shepherded Around The World And Back across the finish line. “If there was only one chance we had at beating the sound of Around The World And Back, we still had to have them involved,” saud DiScanio. With the recording process split in two, it allowed State Champs to write and record more songs than ever before, culling it down to the most potent batch possible. “At the end of the writing and recording process, we had 19 or 20 songs. We looked at each other like, ‘Holy shit. What the hell? This has never happened before,’” he said. .

Not only that, State Champs collaborated with some of pop-punk’s heaviest hitters, as the band co-wrote songs with Alex Gaskarth of All Time Low and Mark Hoppus from Blink-182. Though State Champs had no intention of working with Hoppus, the punk legend stopped by Feldmann’s studio while the band was recording and quickly took a liking to them Before long, Hoppus was helping the band write a pair of songs, working with DiScanio on the lyrics, and then jumping in the vocal booth to lay down some parts of his own. “We had no idea he was even coming in,” said DiScanio, “Then the next day, me and Mark Hoppus are just sitting out by John Feldmann’s pool writing lyrics from scratch. And that ultimately ended up being ‘Dead And Gone,’ which is the first single on the record.”

This chance encounter speaks to what’s at the heart of Living Proof, and that’s DiScanio’s embrace of the things you can’t prepare for. “Living Proof has a lot to do with independence, and finding the independence within you, embracing the mixed emotions that fall in your lap a lot of the time,” said DiScanio, noting that the album’s title is taken from the song “Cut Through The Static,” where he proclaims, “Let’s cut through the static and be the living proof.” On an album full of go-for-broke moments, State Champs pushed themselves to new heights without ever forgetting where they came from.

“There are songs on this album about everything,” he said, “There’s break-ups, and flings, love, loss, all of that. I’ve seen a little bit of everything through this writing process.” Living Proof is a record about coming out the other side those experiences, both triumphant and humbled. That growth as palpable, as State Champs made a record that’s like nothing they’ve done before, but is still an an album that only they could ever make. 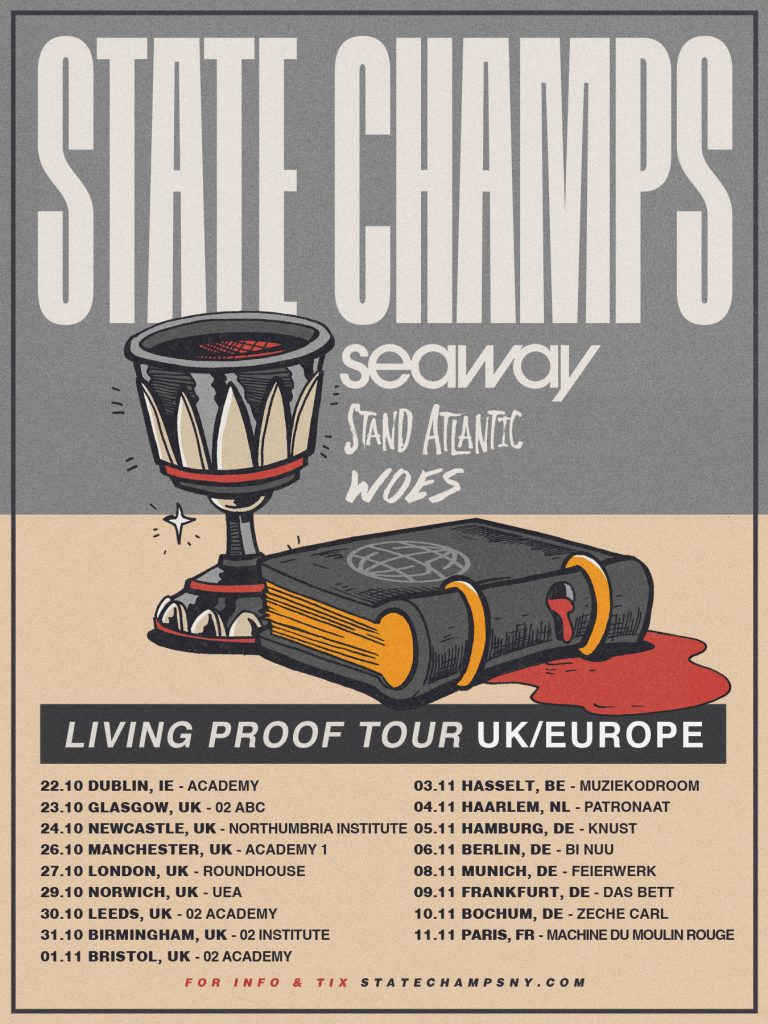