When you think crafts, what comes to mind? It might be cross-stitch, sewing, maybe even gluing and sticking when you were young. With the amount of people in craft-related careers declining and young people rare in the industry, Voice of London discovers how London is bucking that trend.

As fine printers and bookbinders, Barnard & Westwood have their work cut out to produce their plethora of work. From beautifully embossed handmade business cards to the orders of service that line the pews at Westminster Abbey, the company has been in business for over 90 years and has received two royal warrants, from both The Queen and Prince Charles, for their contribution to the industry. And it is an industry which has seen struggles over recent years, with growth declining and an aging workforce.

In a 2010 survey, the Heritage Crafts Association (HCA), which supports and promotes the UK’s crafts industry, found that over half of respondents were worried about their skills dying out and with only three per cent of respondents learning their craft at secondary school, the worry that these skills have no basis in formal education today is becoming clear.

That sentiment is something that Barnard and Westwood are trying hard to change. Three of the team at their north London workshop are apprentices, and working on various parts of the business’ specialist areas. Each in their twenties, they all tell of the frustration they experienced when they first began their journey into the industry, battling constant resistance from their tutors and finding little support from the education system. Lottie Small, 22, is training in the company’s print workshop, working with machinery that dates back to the 1920s as she works hard to produce some of the company’s visually-stunning die-stamping. Having graduated from her hand embroidery degree at the Royal School of Needlework, her attempts to secure herself an apprenticeship were filled with frustration.

“When I initially applied to this apprenticeship as a postgraduate, the company that ran the apprenticeships told me I couldn’t apply because I had a degree,” she says, explaining how she had to apply directly to Barnard & Westwood because the administrator would not accept her application. “I told them ‘you don’t understand!’, [the degree] is irrelevant, in a craft apprenticeship it doesn’t matter what education background you have because it’s the only way I’ll ever be able to learn this.” 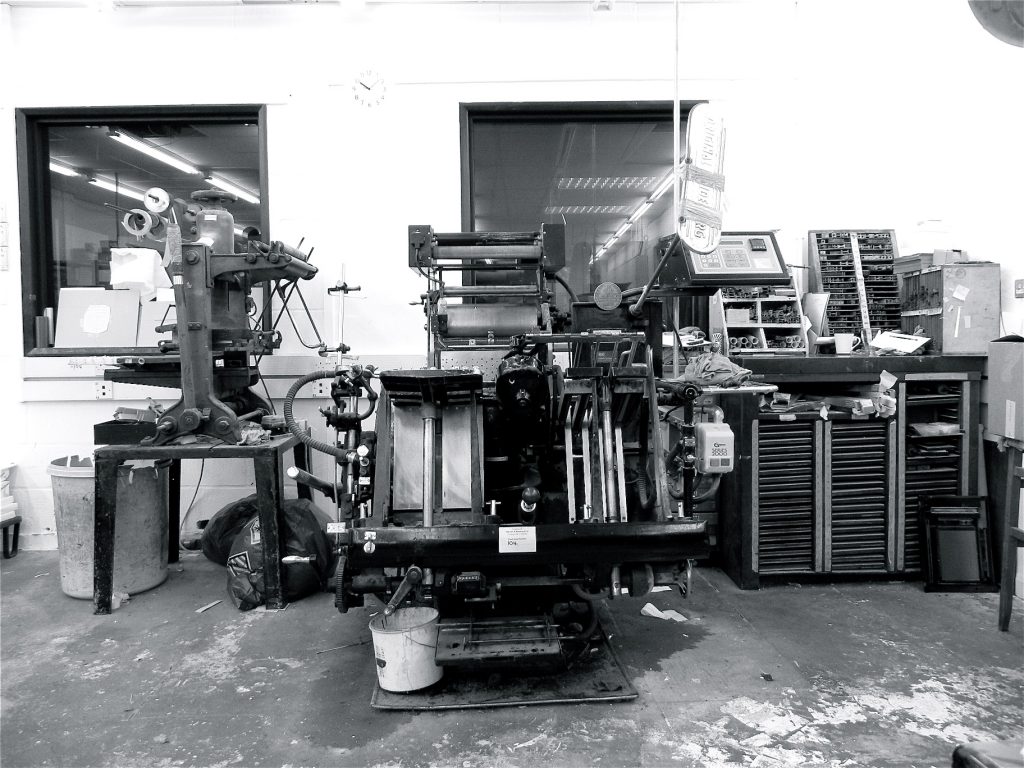 Manual labour: Lottie’s apprenticeship sees her work with machinery that only a handful of people in the UK still know how to service | (Barnard & Westwood)

Lottie’s colleague, Shauna White, 24, is one of the company’s apprentice bookbinders, working with leather, gold foil and centuries-old techniques to transform everyday reading material into incredibly durable volumes, fit to be passed down from generation to generation. “We were really lucky,” she says of her and Lottie’s hands-on training at the Royal School, “but they only take on 10, maybe 12, students a year. That’s tiny, and I guess out of all the university courses I looked at, they were the only ones who still offered some form of hands-on training, so there’s definitely a lack of formal education.”

The HCA’s survey revealed striking results about society’s appreciation for these types of skills. When asked what the particular obstacles are for the industry in the coming years, many of the respondents said that education among the public of the value of craftsmanship was at an all-time low. With the rise of same-day delivery and society’s growing reliance on mass production, many in the industry worry that the public’s perception of hand-crafted products has been skewed. Importing goods from overseas and the subsequent low prices have meant that companies like Barnard & Westwood have to work hard to persuade people that their wares are worth their higher price tag. The cost of the leather, dyes and other materials it uses remain high and selling time and effort will always remain a struggle as they offer no tangible measure aside from the end result. It is a shame considering much of the attraction associated with a personalised notebook or a truly unique business card, comes from the work that goes into creating it.

When I ask each of the apprentices what their most challenging project has been to date, Alastair Abrines, the company’s Marketing Manager, says that the word ‘challenging’ is subjective and has different definitions for the company. “We’ll get so many jobs that could be so simple in terms of the processes and what’s involved with them but the lead time is ‘we need it tomorrow’,” he says, describing their experiences with today’s ‘need-it-now’ mindset.

“But, at the same time, there’ll be some really intricate projects that we’ll work on that might combine lots of different departments, working together and working on lead times to build up that final piece.”

Aged 29, Hayley Andrew is one of the senior apprentices. Having found bookbinding by accident while studying for her degree in contemporary photography, she has worked over seven months towards her official qualification. Tutored by renowned fine binder Kathy Abbott, Hayley’s course has seen her use the highest quality materials and binding techniques to build a bespoke, one-off book. With her initial training completed, she has now become the second generation and has taken on the task of passing on the craft’s intricate ways to Shauna. 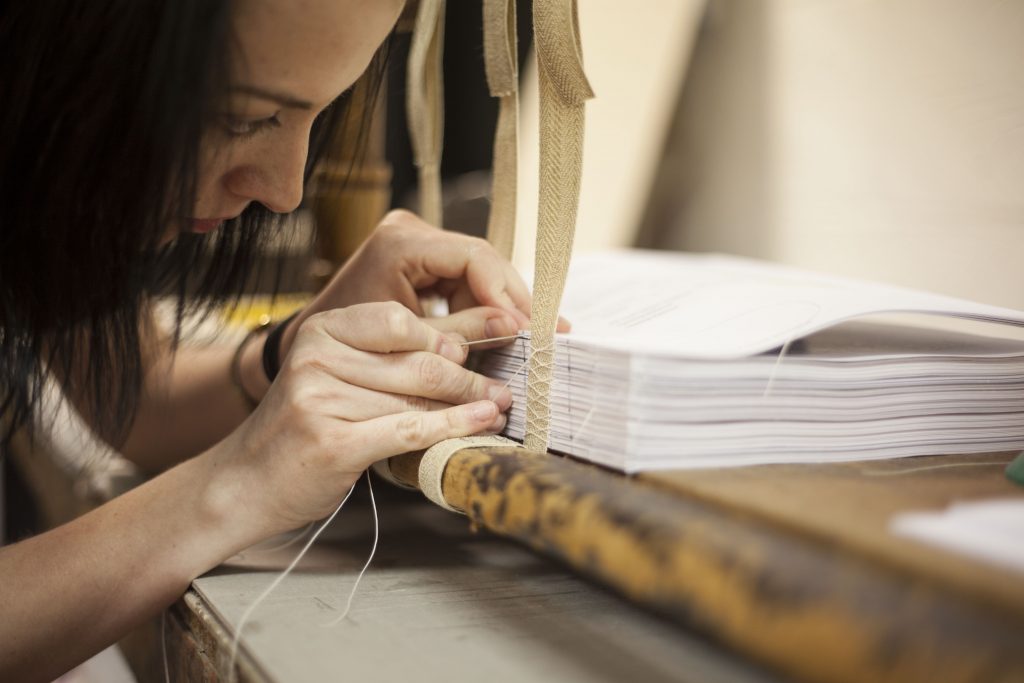 “I do think the point that we’re at the moment is the crest of the wave,” she says on the industry’s future and the need to encourage more young people to get involved. “We’ll be able to scoop up a lot of people and if those people then find a real passion for [craft], they’ll be the ones that push it forward.”

“We’re in a unique position at the moment where we’ve got a mass interest in craft, so much more so than 5 or 6 years ago, so all we need is a good 15 per cent of those people to fall in love with it and that will sustain us, but the important thing is that we push that message forward and reach as many people as possible.” 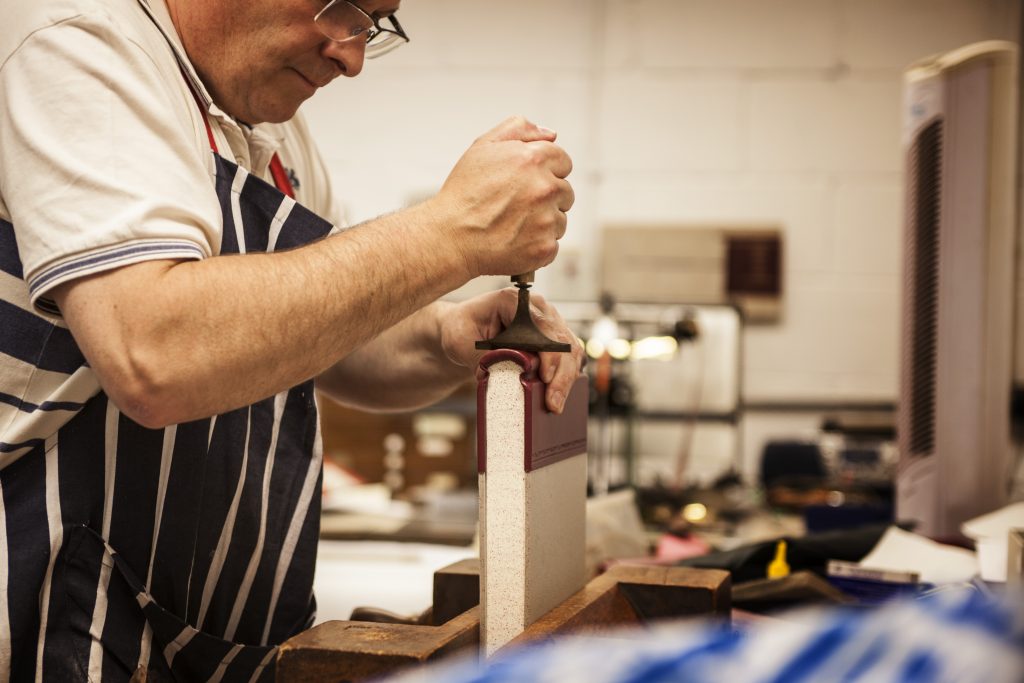 Brutal beauty: finishing touches are made to one of the company’s bookbinding projects, the end result is the work of hundreds of hours of teamwork | (Barnard & Westwood)

At the London College of Communication (LCC) – formally known as the London College of Printing, and now part of the University of the Arts London consortium – facilities for these traditional crafts are aplenty. Spaces for letterpress and screenprinting allow students to discover what was once commonplace across any industry involved in printing the written word. Simon Hinde, the College’s Director of Journalism and Publishing, explains how ironically this old technology is “cutting-edge”, many of the students have grown up in a largely digital age after all. These decade-old machines and techniques are ‘new technology’ to them and many use the techniques in tandem with digital programs to create unique projects. Indeed, LCC’s prospectus for short courses is an interesting oxymoron; traditional and contemporary bookbinding, letterpress and screenprinting all sit alongside the most modern and millennial of courses, looking at social media for journalists and how photographers and artists can blog to their fullest potential using WordPress.

“These traditional crafts are a niche, they’ll always be a niche but a healthy one,” Simon says. “They offer us something different, whether to put on our walls or to illustrate books, or magazines, or even newspapers. I think that will continue. The danger period is probably gone, that was when people were excited and obsessed with digital and these crafts were seen as old-fashioned, dirty and smelly but now people have realised they actually have something to offer.” 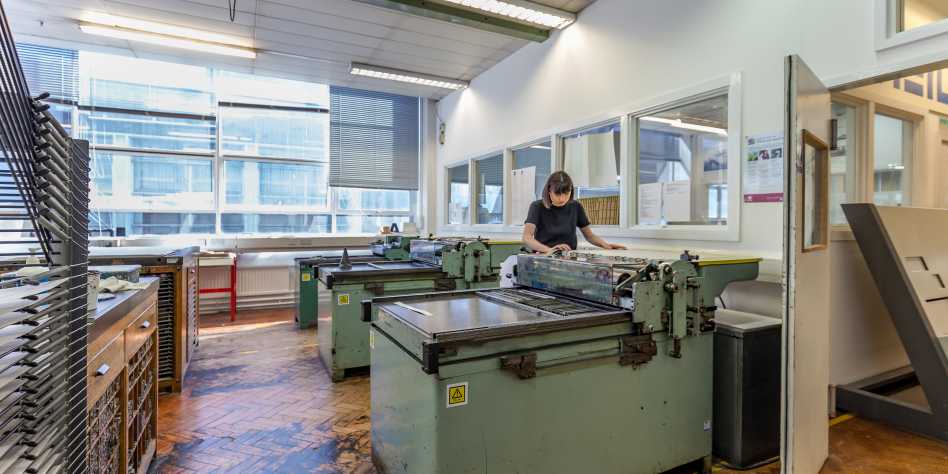 Teaching the next generation: LCC’s letterpress facilities give young people a chance to experience this ‘new technology’ | (LCC)

“I think anybody who has done a bit of letterpress or screenprinting recognises there’s something uniquely pleasing about making something with your hands and most of us don’t get the opportunity to do that very often. Every piece you produce with these crafts is unique in a certain way whereas digital is, by its nature and definition, infinitely replicable so the idea that you can make an individual, distinct and unique piece with your hands is – and will remain – enormously pleasing.” 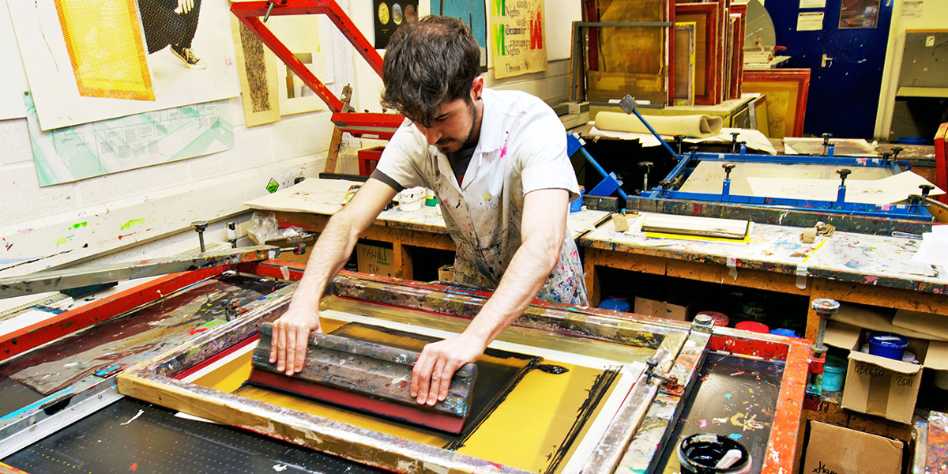 Hands-on: many of LCC’s students combine old techniques with modern technology to get a truly unique project | (LCC)

As Christmas fast approaches, Barnard & Westwood have a busy time ahead. Westminster Abbey will see hundreds of services over the next few months and with the deluge of company parties and end-of-year award ceremonies, the team will be working to pump out handcrafted invitations, each one as lovingly made and inspected as the last. There is the idiom that one measure of a job well done is that you never actually see it happening. Luckily, companies like Barnard & Westwood are not only securing these crafts’ futures but highlighting the best steel doesn’t always have to shine the brightest.

James’ interview feature also forms part of the Voice of London’s culture show, the latest episode of which investigates everything from November’s gal-dem collaboration with the V&A to the rise of jazz in London.

For more information about LCC’s undergraduate, postgraduate and short courses, head to their website.