Never has the world anticipated the salvation of the new year more than now. Surely, 2021 looks more promising than the hellish year behind us, with a long-awaited end to the pandemic and a sense of normality returning to our lives. The year will start the same as the past 6 years; with Veganuary.

The non-profit organisation has just launched their 2021 campaign urging people to try eating plant-based more than ever.

Veganuary was founded in 2014 by husband and wife, Matthew Glover and Jane Land. The idea is simply to inspire people from all around the world to try going vegan for a month.

When signing up, people get access to a free e-book with plenty of nutritious plant-based recipes and tips about veganism.

#Veganuary2021 is LIVE! Today we officially launch our January 2021 campaign 🤩 Let’s make 2021 the year of positive change. There’s never been a more important time to try a plant-based diet, for the planet, for animals and yourself. Sign up today 👉 https://t.co/wdXB6xsbj1 #RT pic.twitter.com/oiSr2rJX4D

Since 2014, more than a million people have signed up online, but the number of unregistered participants could potentially be ten times more.

Apart from the people, there has been significant engagement by businesses. Traditionally meat-oriented fast-food restaurants, like KFC and Pizza Hut were among the 600 businesses participating last year.

This year, McDonald’s has already announced their newest addition to their plant-based range, the McPlant.

The movement has had a strong support from celebrities since the beginning. Their 2021 campaign has been backed by big names from all around the world.

Why are you trying vegan this January? 🌱 We’d love you to RT our official launch video & help us spread the word that #Veganuary2021 is nearly here! 🥳 Sign up to take part (it’s free!) 👉 https://t.co/wdXB6xsbj1 pic.twitter.com/Y129Guz6Wq

Award-winning American actor and environmentalist, Joaquin Phoenix, is an official Veganuary ambassador and one of the many successful actors urging people to participate this year.

Veganuary is not only a way to decrease animal cruelty, but it has a great impact on the environment too. Recent research suggests that over 100 thousand tonnes of CO2 were saved by one million participants so far. 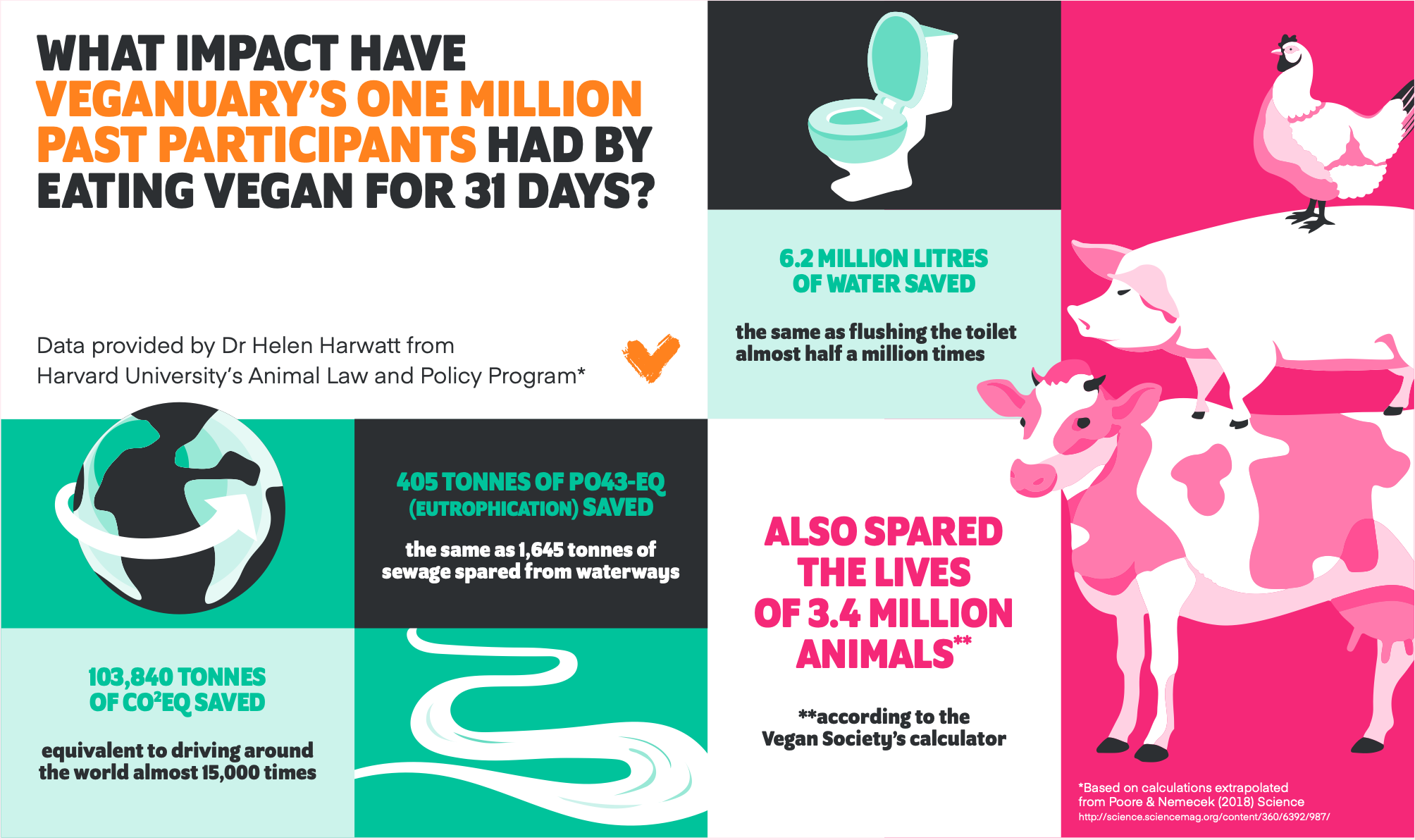 This year, the number of participants is expected to be as many as half a million, which is a decent increase from last year’s 400 thousand.

The month of Veganuary on its own has an immensely positive impact, but interestingly, 76% of participants are reported to stick to the diet after the one-month-challenge.

A recent landmark development is Singapore approving lab-grown meat for the first time. The no-kill version of chicken meat is a pioneering innovation in the industry that could reshape the way we think about veganism.

Harry Potter actor, Evanna Lynch, talks about her own experience with veganism in this year’s press release.

“I’ve loved Veganuary’s work for a long time because I know, having been a vegetarian who was intimidated by veganism, that so many people just won’t start because they think it’s too hard and that they’re going to fail. And Veganuary kind of presents you an opportunity to do it with other people, with a community, and it’s not saying it’s a lifelong commitment, you know, it’s saying ‘try it for a month and see how you feel’.”