Now, these are our types of fruits and veggies

Gingerbread house, chocolate windows and roof made out of frosting and sugar? Please. That is so last year. Walking into Ben Churchill’s kitchen would be climbing a stairway to heaven for Hansel and Gretel; the evil witch’s candy home has nothing on his innovative desserts shaped like…well, anything. From peppers and carrots, eggs and trees, to milk bottles and dish sponges, the St Albans chef is showing us that, in the food industry, the only limit is your imagination.

‘’It started 18 months ago’’, he explains to The Voice of London. Although he’s been a professional cook for years now, he told us (and we could not believe it) that he has never been a pastry chef before. “I just thought “wouldn’t it be cool to make something shaped like a lemon, but actually be a dessert’’. This was the first one’’. ‘’The dropped lemon’’, as Ben named it, was, in fact, a yellow-coloured white chocolate shell shaped like a lemon, filled with a lemon ganache.

But looking at the ‘before’ photograph, you would’ve never guessed that. And that’s the point. You shouldn’t. 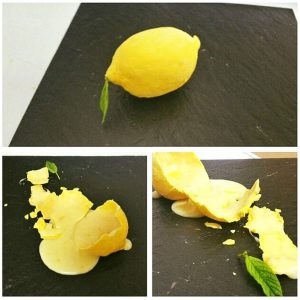 ‘’The dropped lemon’’ was a beginning of something amazing and the food illusionist is now posting new culinary artwork on his Facebook page every week, where almost 40,000 followers enjoy his recipes and videos. The chef currently works in a local restaurant. ‘’I’ve been a chef for 10 years’’, he says. ‘’I started as a pot wash, then trained up under chefs, finally taking my own kitchen.’’ According to his website, today Ben considers himself an artist, a chef and a food illusionist. According to the growing number of his social media fans, they couldn’t agree more.

So how does it work? Food illusion dishes are those designed to play tricks on the eye or to fool your palate. In Ben’s case, it’s the first; he is demonstrating his artistry by presenting us desserts we identify as food that is completely different from what it actually is – or desserts we can’t identify as food at all.

So his edible dish sponge is actually made from olive oil and mint sponge, strawberry jam and cream, while his recreation of morning cup of coffee is a delicious coffee and walnut cake in a white chocolate mug. 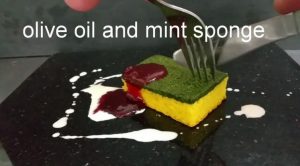 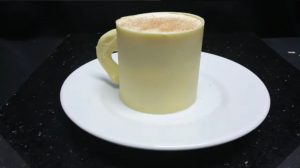 And all of you Game of Thrones fans, check out this fantastic silver chocolate Iron Throne (link to the Facebook video) – the chef captioned it ‘’You win or you dine’’. Seriously?! Even queen Cersei would admit being blown away by this cake.

Ben’s ideas can come from everywhere, from food supplies, random objects to television shows; one of our favourites is definitely his recent Suicide Squad dessert. Apart from the creativity and originality behind his dishes, we had to take a moment to admire his plating skills as well.

Although the presentation is what will grab your attention initially, Ben explains that the flavours of the desserts are never random. When it comes to the Suicide Squad, which is formed from lime bavarois and citric acid soil, the food illusionist says he ‘’wanted sour flavours and popping candy on the plate to signify the joker’s madness’’.

His fruits/vegetables-like desserts as optical illusions are probably blowing our minds the most. ‘’When I do an idea the taste has to match the product, otherwise what’s the point? So if it’s shaped like an apple it’ll taste like an apple’’. But that ain’t no apple.

So there is this petite orange tree growing in a flowerpot. 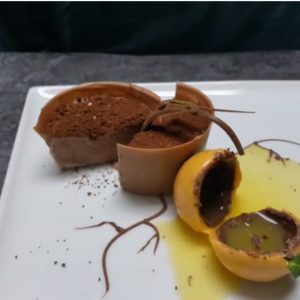 Yeah, not so much. The realistic ‘orange’ is, in fact, chocolate filled with freshly squeezed orange juice, while the ‘flowerpot’ is a chocolate mousse (low fat!) in a chocolate pot.

We are so getting the ‘grandma’s garden’ vibe from this carrot cake. The ‘carrot’ is coated with orange-coloured cream cheese icing, while the ‘stones’ are glazed with white chocolate. Even the leaves are not simply decorative – it’s actually sugar-blanched mint.

St Albans chef continues to amaze us with apple and pear crumbles – by that we mean baked apple bavarois and pear-shaped chocolate – watermelon jelly, coconut mushrooms, chilli pepper-formed chilli & chocolate cake and so much more. You can find all these marvellous recipes and demonstrations on his Instagram page as well. 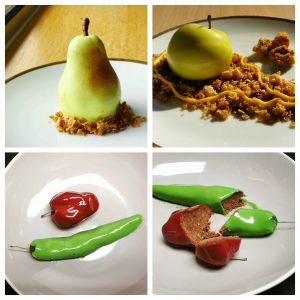 Although usually Ben makes sure that his dishes’ essences reflect their looks, he sometimes decides to take the optical illusion in his recipes to a whole different level by creating desserts that look like ordinary savouries. 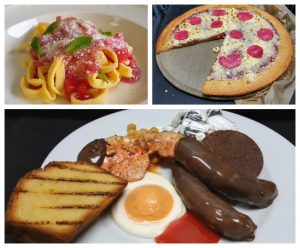 His sweet ‘’peperoni pizza’’ (Just shut up and take my money!) is made from vanilla sponge, white chocolate, strawberry jam and strawberry marzipan, while the ‘spaghetti pasta’ features fried egg custard and blackberry sauce. But we were, in all honesty, completely deceived by the full English breakfast; from marshmallow bacon to marzipan beans, Ben is showing you how to construct every ingredient from scratch in this video.

The food artist is currently working on a book of his processes, techniques and recipes that will be a guide for his fans, interested in recreating his desserts. He told us the book is currently written in draft. ‘’I am testing and re-testing dishes and photographing them, so it’s getting there.’’ Stay tuned!

Ben says his vision is ‘’to inspire people to think outside the box’’ and these unreal dessert illusions are making us do just that. Food illusion is a form of entertainment in a best way possible – you can take pleasure in the taste of your plate while feasting your eyes on the inventive presentation as well. Ben shows us how to project our imagination into art in the food world, and his work is verifying that you can do it all on your own. ‘’I’ve never been trained in pastry, I started teaching myself 18 months ago.’’ This chef hasn’t been disguising his desserts for a long time, yet his truly original collection of culinary creations does not reflect that at all.

What will inspire this chef to do wonders in the kitchen during the next 18 months is yet to be seen, but we expect to be blown away with his upcoming desserts as well. And something tells us we will – Ben’s motto is ‘’nothing is impossible’’.

If you enjoyed Ben’s desserts just as much as we did, take a look at some more unreal cake bakers we found on Instagram: