You could hear a pin drop in the Emmanuel Centre as New York Times investigative journalists Jodi Kantor and Megan Twohey recounted the years leading up to 5th October 2017 – the day they broke the story accusing Harvey Weinstein of sexual harassment and assault.

Update: As of 11th December 2019, Jodi Kantor and Meghan Twohey have reported that Harvey Weinstein and his team have come to a tentative settlement agreement of $25 million with 30 of his accusers – a mix of actresses and former employees.

This deal wouldn’t require Weinstein to admit any wrongdoing or pay his accusers himself, and would bring an end to nearly every lawsuit against him and his company.

The $25 million (£18.6 million) is part of a $47 million (£35.1 million) bankruptcy settlement coming from the insurance companies that worked with Weinstein’s now-bankrupt company, The Weinstein Company.

$6.2 million (£4.6 million) would be split between eighteen of Weinstein’s alleged victims – no one receiving more than $500,000 (£373.4). The other $18.5 million (£13.8 million) would be kept “for those who were part of a class action lawsuit case, the New York attorney general’s suit, and any future claimants”, The New York Times reporters disclosed.

The New York Times reported that while many of the women aren’t content with the idea of a settlement, they aren’t sure what else they could do. Many are outside the statute of limitations, or haven’t been able to find another legal alternative. Not taking their share of the settlement might mean they’ll end up empty-handed.

One lawyer felt that his client was being forced into the deal. He revealed that if his client didn’t take her cut of the money, she was told Weinstein could use it for his own defense costs.

Harvey Weinstein has a separate trial set for early January involving the accounts of two women. One woman has accused Weinstein of raping her in New York City hotel in 2013. The second woman alleged he forced oral sex on her at his townhouse in 2006.

The event ‘Breaking the Harvey Weinstein Story’ was a collaboration between The New York Times and Intelligence Squared as part of their new series, Intelligence Talks.

Kantor and Twohey were promoting their new book, She Said, which details the three-year journey leading up to publishing details about the former Hollywood producer.

Weinstein is facing a trial in the United States where he stands accused of rape. He denies these charges and has previously denied other allegations of sexual misconduct. 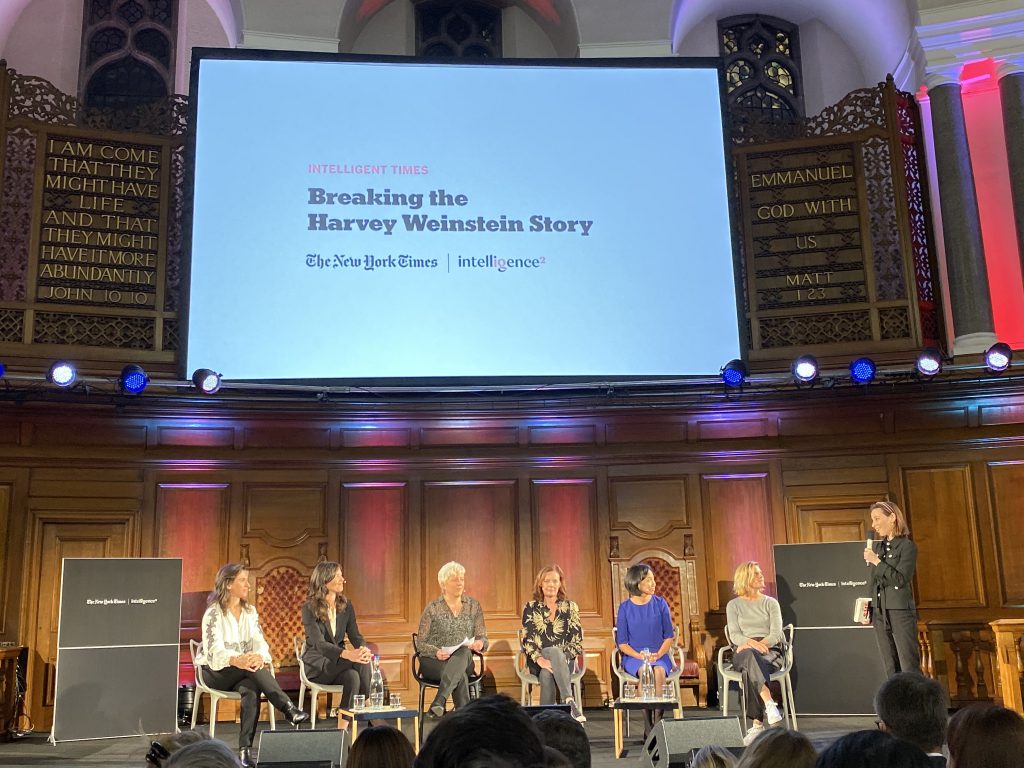 The talk mirrored the contents of the book — the early days when their notes were just speculation, the hesitation of the interviewees to share their stories, the moment Harvey Weinstein himself barged into the NYT offices, and the day they hit ‘publish’.

While sat in a semicircle the women discussed the reason for writing the novel. Kantor called the book an “X-ray of how power works”, and in their fight to uncover more and more information.

The women spoke of their trauma after alleging they were assaulted by Weinstein.

Madden shared, ‘I felt deep shame, deep humiliation and a sense of responsibility for what happened to me’.

Chiu shared the challenges she faced in speaking out. ‘The story is no longer your own… the story walks away from you and you’re no longer the protagonist you thought you were,’ she said.

After confiding in her colleagues and family about the alleged assault, she thought the situation would be handled immediately. ‘I really thought it was that simple,’ she confessed.

The women’s stories are among others featured in the raw and honest novel. The novel includes accounts from both well-known and unknown women in the film industry, but it’s the unknown women who are the reason the story has made such an impact, the women agreed. 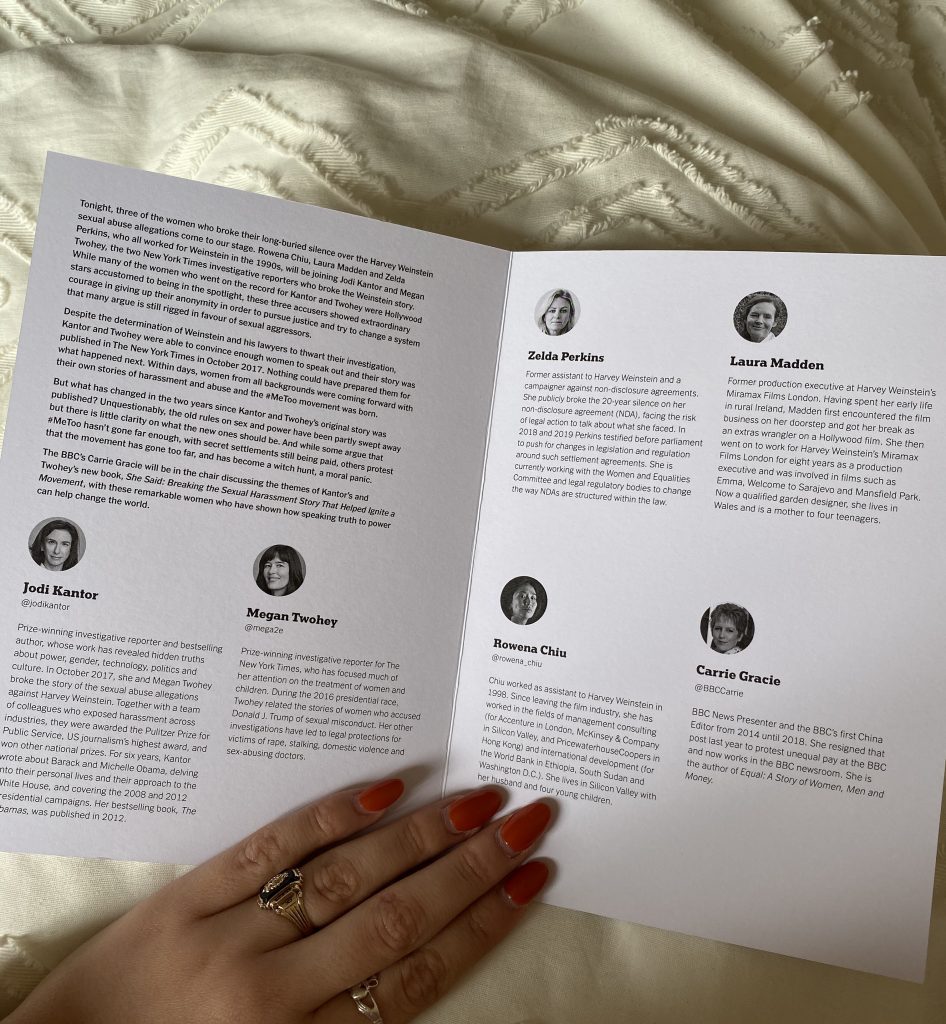 She Said includes real conversations and letters between the interviewees and the reporters.

The publishing of the story evoked different reactions from each woman. At first, Perkins felt “disappointed because I didn’t feel it was big enough.” She revealed the contents of the article wouldn’t ‘get him’, but conceded she felt different two days later.

Chiu had a ‘holy crap moment’. For so long she thought the story wouldn’t come out, and when it did ‘it sparked a global movement’.

When asked what has changed in the two years since the news story broke, Madden and Perkins agreed ‘everything but nothing has changed. Men like Bill Cosby are being held accountable for their behaviour, but there are still people in positions of power using their connections and authority as a weapon. 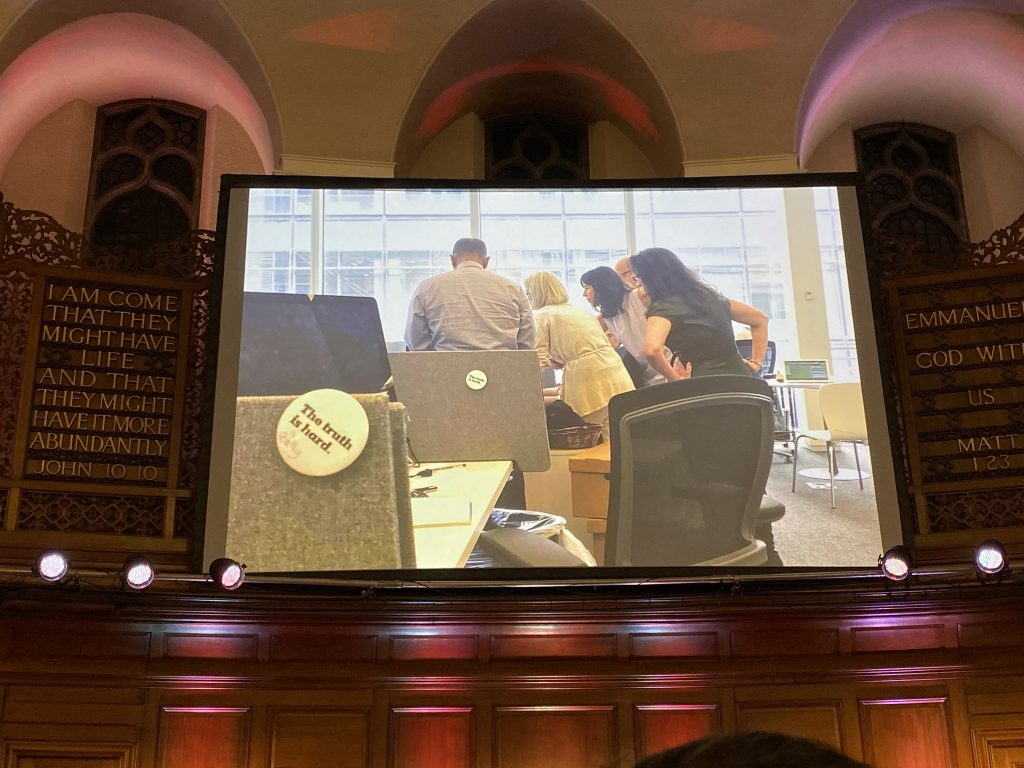 Twohey, Kantor and others gathered around the computer right before publishing the NYT story / Source: Derrian Douglas

Chiu felt this revelation meant that ‘some of us who are silent have found a voice’.

Harvey Weinstein’s trial is set for 6th January 2020. The Manhattan District Attorney’s office will attempt to charge him with predatory sexual assault and rape. Harvey Weinstein denies all allegations of sexual misconduct.

She Said by Jodi Kantor and Megan Twohey is on sale now.

You can buy tickets for the next Intelligence Talks event here.