Thousands of protesters blocked several bridges in London and more than 80 were arrested in a “day of rebellion” for climate change.

Demonstrations started at 10am on Saturday and followed a series of non-violent direct actions by the Extinction Rebellion campaign that began on 31 October. The campaign calls for the UK Government to take greater action against the “Ecological crisis caused by climate change, pollution and habitat destruction”.

More than 6,000 people blocked Lambeth, Westminster, Waterloo, Blackfriars and Southwark bridges this morning and then moved on to gather altogether in Parliament Square, where the original demonstration was planned to take place. They had a ‘Citizens Assembly’ and a closing ceremony where they planted trees.

“We need radical political leadership, who genuinely consider our future, who put power over profit because that’s what’s at stake. Climate change is a global issue. It will affect us all, although right now the bitter irony is that it has had the biggest impact on those who have done the least to create it,” said Jackson Harries, one of the activists at Westminster Bridge, in his speech.

During the day, the Declaration of Rebellion was read and repeated by all the attendees in all five bridges. It was delivered to the Government on the 8 November, warning them of upcoming civil disobedience.

Other actions this week included blockage to the government’s energy department headquarters, the unveiling of a banner saying “Climate change – we are fucked” in Westminster bridge and a Queer Party to save the Amazon that shut down the Brazilian Embassy on Thursday.

The ceremony and tree planting at parliament square was beautiful and such a fitting end to today's rebellion. Feeling everyone's love and energy as we surrounded the trees moved me to tears. Thank you @ExtinctionR Keep up the good fight! #love #trees #ParliamentSquare #Peace pic.twitter.com/F6ik58TTlQ

Lambeth was the bridge that saw the most arrests and the police even blocked pedestrian access at one point to stop more people from joining. Extinction Rebellion believe climate change is a threat so urgent, it requires people to risk everything to increase awareness and put pressure on policymakers to act on it.

The Metropolitan Police said in a statement all the bridges were reopened by 4pm after campaigners caused “major traffic disruption”. They also said arrests were made for obstruction of the Highway Act, some Bail Act offences and others.

Chloe Andrews, one of the activists in the protest, told The Voice of London:

“I’ve dedicated my career to environmental science, I’ve changed my lifestyle, and we’re still not seeing anywhere near enough action to get to carbon neutrality by the time the new research by the IPCC says we need to. I guess it’s just another thing to try. I feel like I’ve tried everything else so here I am.”

The UN warned of a climate change catastrophe in a report published by the Intergovernmental Panel on Climate Change (IPCC), giving humanity 12 years to act and stop the Earth warming beyond 1.5°C, which presents a serious danger, both to humans and wildlife. They have also reported the Earth is more reactive to fossil fuel emissions than previously thought and suggests they must be reduced by 25 per cent more than previously approximated.

Another demonstrator, who wishes to remain anonymous, said:

“I don’t necessarily agree with blocking a bridge but I don’t see more options at the moment. I am usually a rule-follower, but I am here because I have grown children and I want to have grown grandchildren one day. If you look at that City there, most of it will be under water anyway so why do they keep building?” 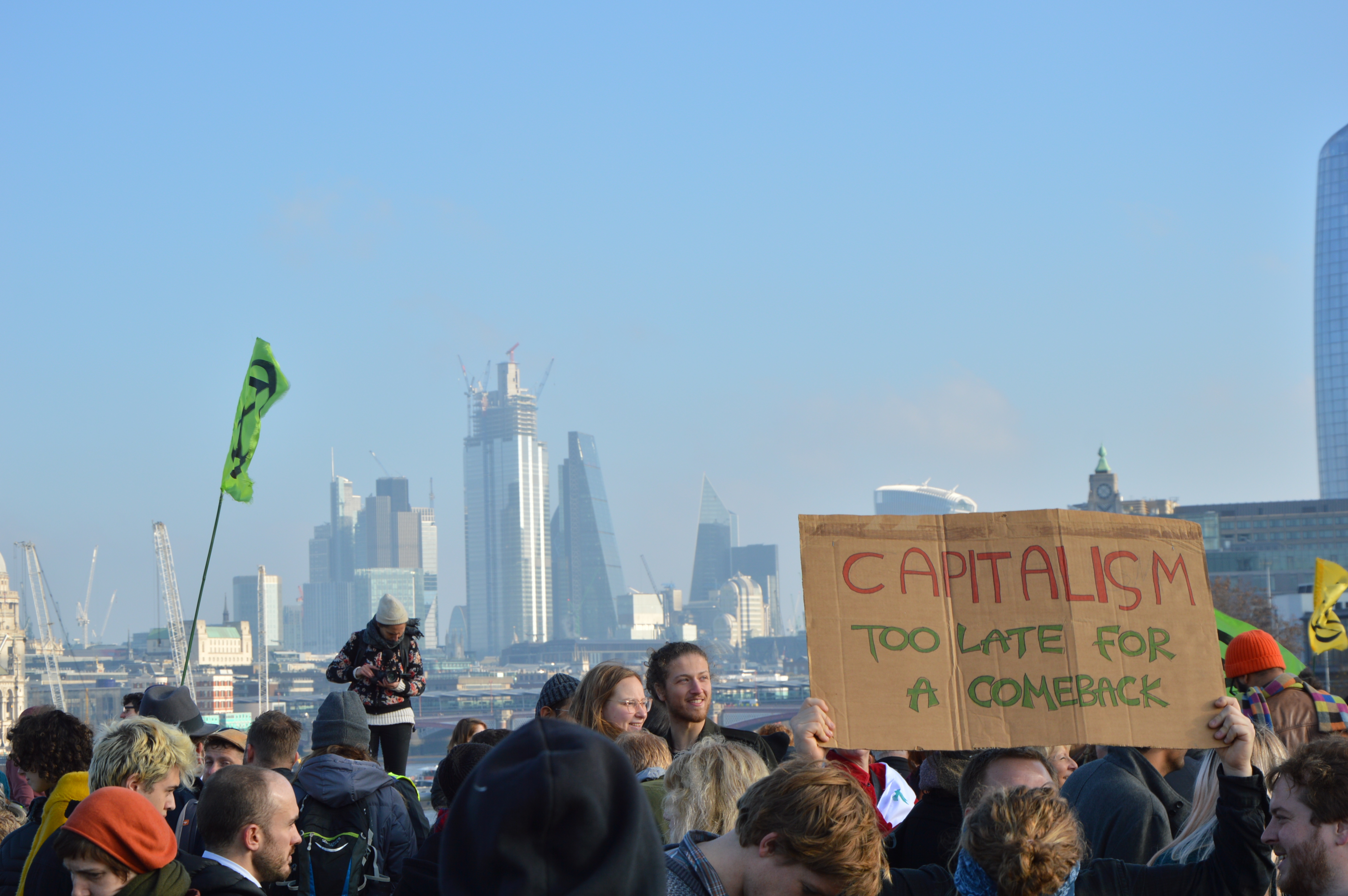 View of the City from Waterloo bridge. Photo: Maria Campuzano

Yet for other Londoners, the protest seemed unnecessary. One man shouted “blocking the entire bridge for this? Are you mad?” at a group of people who were holding a banner for pedestrians to see and get engaged. Later on, another man confronted the exact same group telling them it was for them he had buried more than 2,000 men in the Korean war. 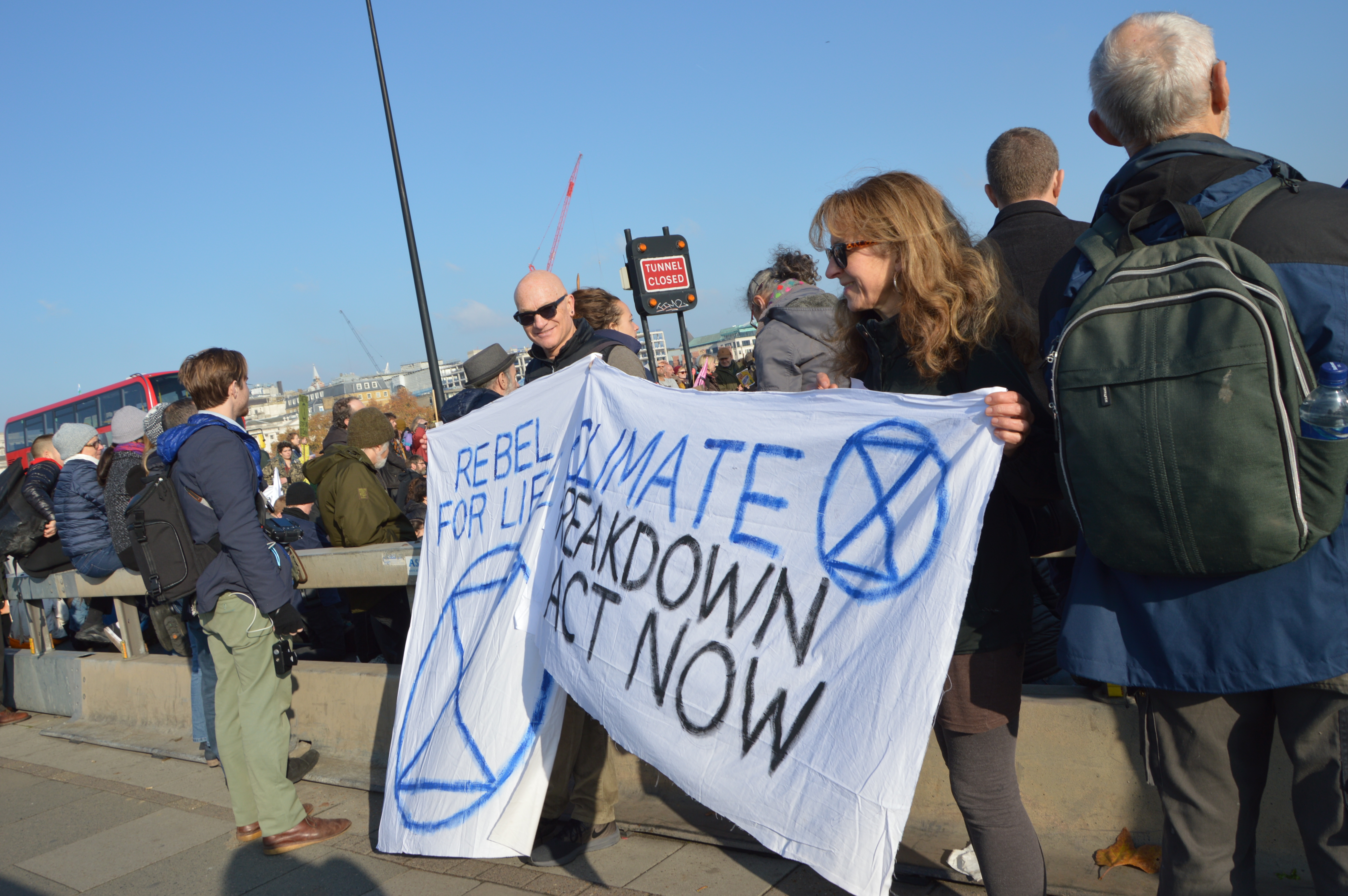 The demonstrations saw the presence of renowned figures, including three members of the Green Party. 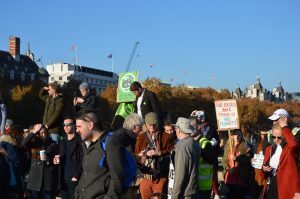 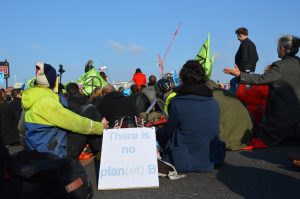 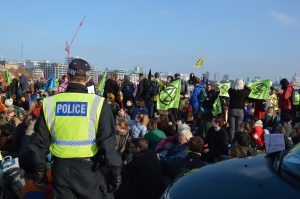 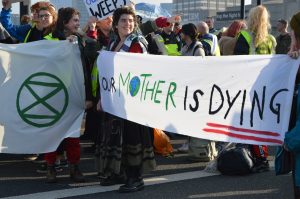 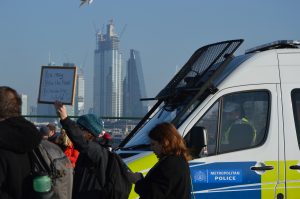 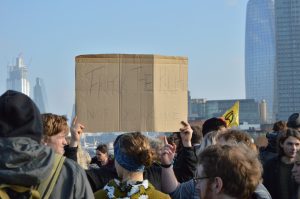 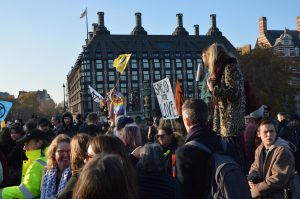 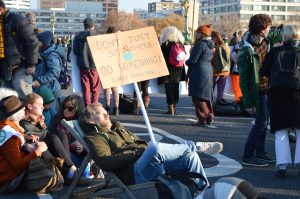 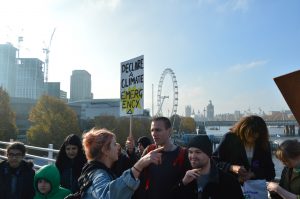 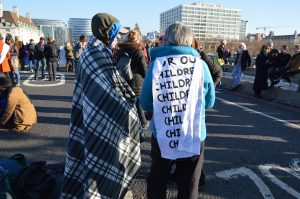 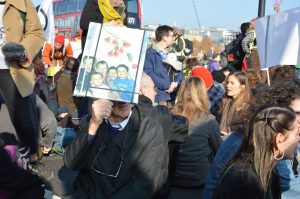 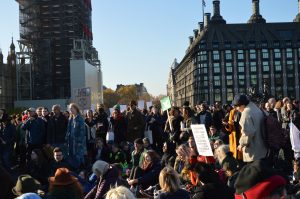 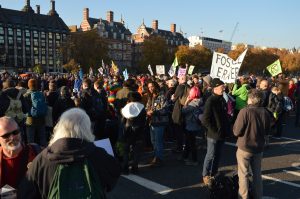 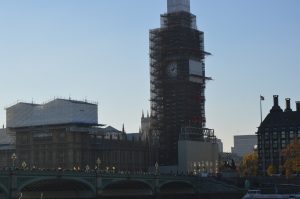 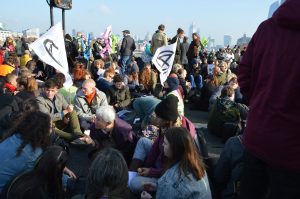 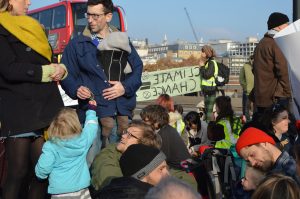 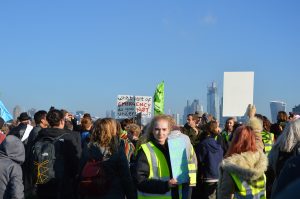 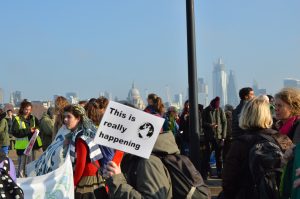 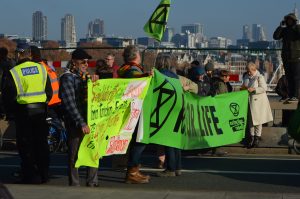 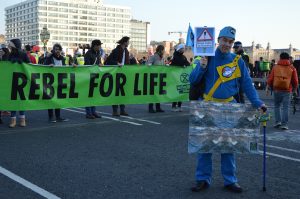 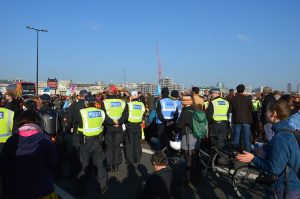 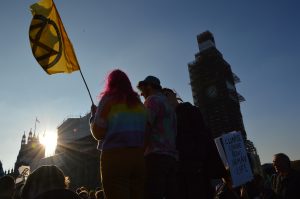 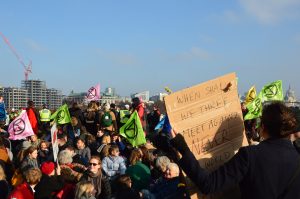 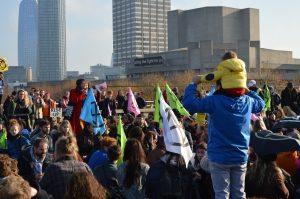 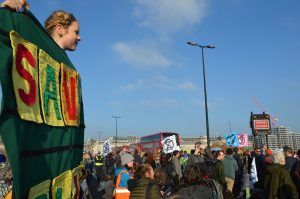