From the increased popularity of electronic dance music in the mainstream to London’s very own grime scene, producers are finally being celebrated fairly, instead of being the person in the shadows. 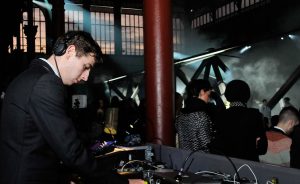 Jamie xx at a Boiler Room event in London | (sidewalkhustle)

Over the past couple of years, the rise of the producer/performer has started to shift the music industry towards a new future of artists who make exactly what they want, and with that comes the fortunate death of men in suits deciding what they feel we all want to hear.

Although producers from all over, especially those from the hip hop and electronic scenes are beginning to change the face of the music industry, London is doing it in it’s own way. Starting way back in the 1990s, a wave of new music swept through the city, this genre being the predecessor of London’s beloved Grime. Garage music filled venues South of the Thames, allowing those who produced, to DJ nights and eventually get their own music out there.

In order to learn more about the complexities of producing and with the grime scene being one of the most envied in the world, Spaced talked to London-based producer Tarquin (Tarq) on how he views the industry and where he sees London in the future for producers similar to himself.

Tarquin aka Tarq, makes electronic music and hopes to “challenge conventional practices and structures within club/electronic music to offer something more than a functional workout in the club”, starting out using his Grandad’s PC to make music on Garageband to playing mixes on Rinse FM and DJing all around the city. For Tarq, the idea of producing and “creating a complete piece of music from start to finish myself”, was far more appealing than learning an instrument or being “one part of something bigger”.

When speaking on a lack of respect for producers, he said he feels it is becoming “a more recognised art form as electronic music is getting bigger”. However, we should respect those who were producing electronic music first, the pioneers “should be respected and held in the same artistic regard as people pushing the boundaries now.”.

Being based in London, no matter how much talent is bursting through to the surface, it can still be a struggle. He spoke of the current issues within the city saying, “London is a place where the poor struggle as costs are so high and for a lot of artists/producers they find themselves in that category. So as a result I think we probably strive to work harder at our craft to survive but also to compete with stiff competition. So as a result the music constantly evolves and constantly sustains a leadership.”.

It’s not all doom and gloom however, with London being one of the most diverse places in the world, it makes for a lot of inspiration to draw upon, “As far as the scene goes I think its pretty healthy, especially in regards to the variety of club music out there now. London and the UK has always drawn inspiration from around the globe and this has never been more evident in club music.

If you’ve got a goal or something to achieve London can be the place to be and the same goes for trying success as a producer – there are so many avenues, people and facilities at hand.”