Based in South-London’s Peckham, Grace Helmer reaches beyond her everyday view to create light-toned landscapes, beautiful nature scenes and even her comic ‘Small Hours’. 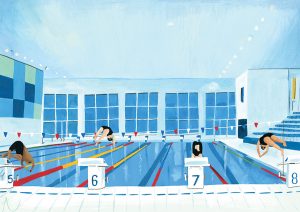 As an oil paint connoisseur of today, Helmer is able to uncommonly bring this technique in to play with humorous cartoons, detailing the life of a freelance illustrator in London in her comic, with all of its glory from what she describes as ‘Death, Dating and Drawing’.

After graduating from Camberwell College of Arts back in 2012, Helmer has since been working for clients such as Apple, HarvardX and even Lewisham Swimming Pool. The illustrator breathes life into all of her projects from her use of subtle colours to her borderline abstract techniques.

In order to learn more about Grace’s work and London’s illustration scene, she agreed to answer some questions about everything drawing: 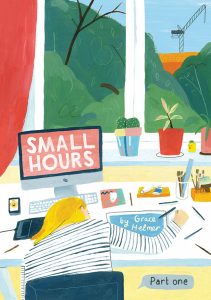 Spaced:  What kind of illustration do you do?

Grace Helmer: I use oil paints with a bit of Photoshop mixed in. I mainly work for books and magazines, though have done the odd animation and other bits!

How did you get into it?

I took an Art Foundation course in Brighton and they told me I should do Illustration. So I did. Then I moved to London to do an Illustration degree at Camberwell and carried on from there. I initially had no idea I could carry on painting in illustration, at first I thought it was all fine liner drawings, I didn’t really know what it was. But I learnt it is so broad and you can have a lot of freedom within it, if you keep pushing yourself.

Hmm. There are quite different pockets of Illustrators in London. For a long time I didn’t feel like my work really fit the London ‘scene’, actually I still don’t think it does really. That’s where the internet comes in, and realising that there’s a much broader audience/scene out there, and you don’t have to conform to what everyone is interested in where you are if you don’t want to.

How does living in London influence your work?

I was definitely influenced by shows I went to whilst at university. The Pick Me Up Graphic Arts Festival at Somerset House often has so much colourful and exciting work, after I interned there my work definitely got a lot more colourful and playful.

I think the pace of London life has had an effect on my rate of work though. Everything moves quite fast here, people have limited time, so I’ve got faster at working.

Q: Who are your favourite illustrators/inspirations?

At the moment I’m excited by more abstract shapes and colours – I love looking at weavings and tapestries where designs have to be paired down to fit a certain amount of colours and work within restraints of the materials. I treated myself to a throw from Slowdown Studio in the US recently which I’m in love with…

Also been making more of an effort to read and collect comics this year. Collections like ShortBox are amazing – they put out a diverse selection of really great comics and prints every few months.

Q: What projects have you been involved with?

I suppose some highlights would be illustrating Another Escape magazine – for the last 6 volumes I’ve been the main illustrator, working closely with Rachel Taylor who runs it. It’s nice to be given a little more time for their briefs, and to have quite a collaborative planning process.

Other great commissions have been making a hand painted animation for HarvardX, painting VR headsets for Google, and an animated loop for VRAK TV in Canada. Commissioned work is interesting as I learn about lots of different subjects or ways of looking at a topic.

In my spare time I’ve been working on an autobiographical comic called ‘Small Hours’, and doing the odd painting for fun. It’s hard to find time! Last year, my friend Charlotte Mei and I managed to set up an exhibition in Tokyo of our collaborative work, which we also showed in London when we came back.

Personal work reminds me who I am when commissions can feel a little like you just have to churn it out.

Check Grace’s work out at www.gracehelmer.co.uk