In a time where pop music is recycled, dull and mediocre, PC music might be the eruption of colour we need in a black and white industry. 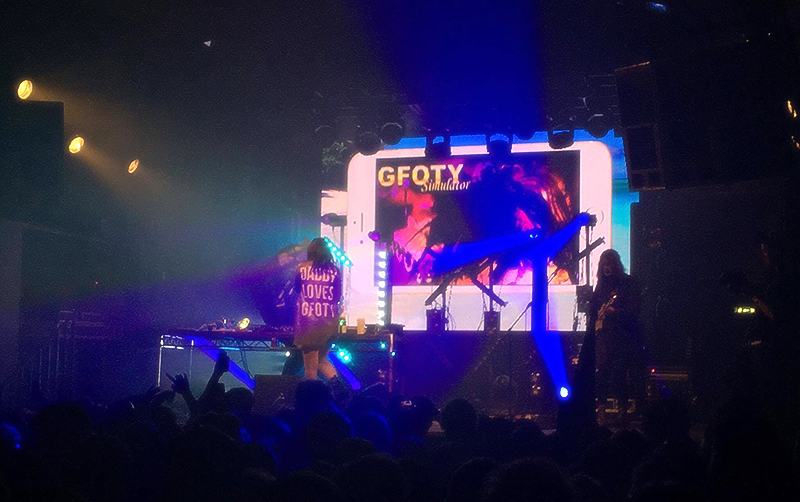 PC Music first presented its ridiculously sugary and relentlessly weird sonic movement to the world three years ago and was received with a mixture of enthusiasm, loathing and uncertainty. The question was asked whether was it a deliberately crap parody of today’s music or overly digitised music taken to invigorating new boundaries?

Despite never properly breaking through to the charting mainstream, Carly Rae Jepsen and Charli XCX have now collaborated with artists under the PC music brand – allowing for the cult-like fan base to continuously keep evolving.

Their niche is tinny synth infused pop music, which sporadically grows into a overactive version of Ibiza house, often overlapped with distorted helium vocal offerings. Unavoidably, imaginably, the label showcase hit the highest of highs and the weirdest of weirdest lows. Alongside the good-humoured babble of pop heavyweight headliner Danny L Harle being accompanied by extras danced as angles in surgical masks and GFOTY closing her thirty minute set with a call to “eat Pizza Express and drink Frappuccino’s”, there were moments of confusion and moments of genius.

Spinee delivered with a ferocious girl-power DJ set full of her well-known, fast paced remixes of Alan Walker – Faded and Evanescence – Bring Me To Life.  Felicita took the crowd back to 1980’s club kid Britain with his settling, Alice Glass and Ethan inspired production. Most surprisingly, label boss A G Cook played a low key set where it almost seemed like an interval due to a blackout of the stage and lack of dance bangers.

Otherwise, GFOTY (Girlfriend Of The Year, daughter of Jeff Salmon) entered the stage in trademark form: hyper sexualised, ironic and constantly in character as a superficial, mentally unstable ex-girlfriend. Drinking Moët from a Starbucks tumbler she whipped through her discography from classic tracks ‘Poison’ featuring tense, pop-rock drums to the buzzing, glitchy ‘Mr E.’. It was refreshing to hear live instrumentation for the first time in the evening, as she had a guitarist (which she later mid-song decided to make out with, on stage).

Breakout star Hannah Diamond presented glossy glamour amongst her chaotic label mates. A highlight of the set was her 2016 single ‘Hi’, which was catchy and had the hipster-filled audience dancing like infatuated crazy teens. Onto the next track, ‘Fade Away’, Diamond’s latest single, turned iconic London venue Heaven into Bergheim for three minutes but in an energetic German helium-techno kind of sense. Short-lived, Diamond returned to her famous child vocals for singles Keri Baby and Attachment, which the glittery crowd erupted to with the help of confetti exploding from the ceiling. Somehow, Diamond was able to turn four tracks into a thirty-minute set.

It’s only natural at a label showcase that you are bound to gravitate towards certain artists and not enjoy others. Sometimes overwhelming, sometimes it just sounds like noise – but it’s got to hear a point where an amalgamation of noise is more enjoyable to listen to than the same old 808’s and two-bar Ableton loops on the airways. Sugary, addictive and stylish. It’s advised to listen to PC music at your own risk.