36% of Londoners say that it is too expensive to go out at night, according to a new report by the London City Hall.

The findings show that, outside of work, two-thirds of Londoners are “regularly active at night”, (the report defines “night” as the time slot between 6 pm and 6 am). This could involve taking part in activities such as going to the shops, exercising and socialising in public venues at least once a week.

However, the biggest barrier for Londoners to enjoy culture and leisure activities at night is the cost. 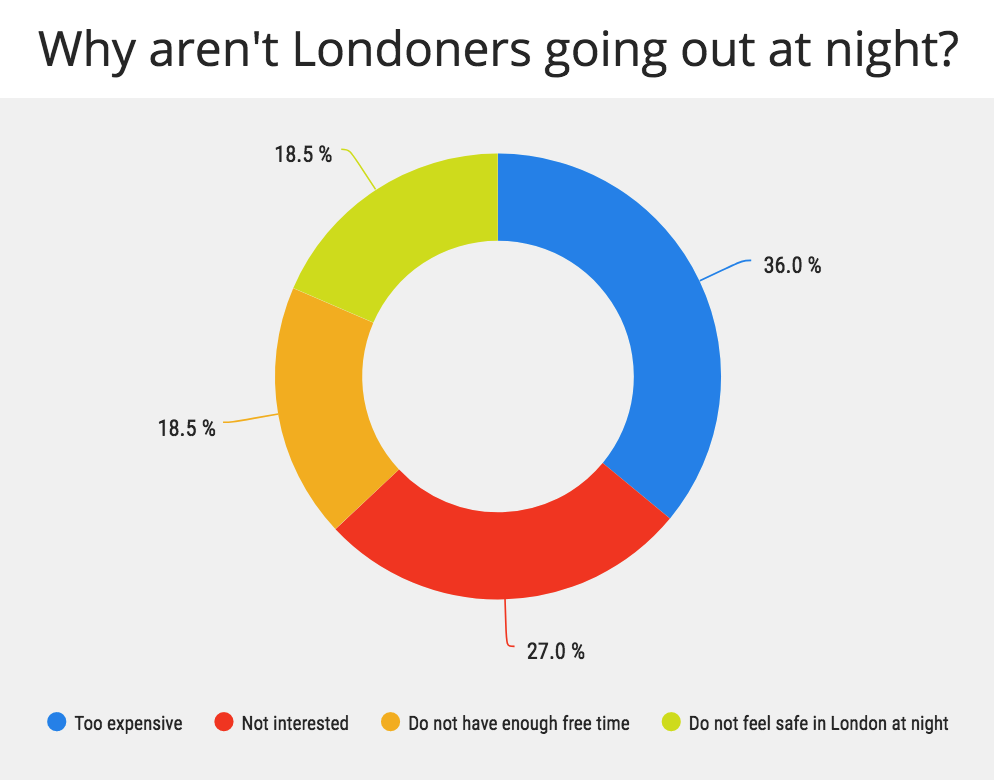 The barriers for Londoners to go out at night Statistics: GLA Economics; Graph: Leyi Chen

Chris Edwards, who was having dinner with his friends at Piccadilly Circus, believed that the cost in London is high because it is an attractive city.

“Because of its safety and security, and its multicultural elements. [It’s] also because of its entertainment. It has a massive attraction to many people because there are so many things going on here.”

Saad Ashraf, who works in a coffee house in Central London, said: “[It’s] probably because there are so many people cramped in a tiny city and the huge head offices around here. And, obviously, it’s just an amazing, well-known city around the world and one of the main destinations. That’s probably why it’s really expensive.”

The expenses of some night time activities, such as eating in a restaurant and going to the theatre, has been growing faster than inflation. 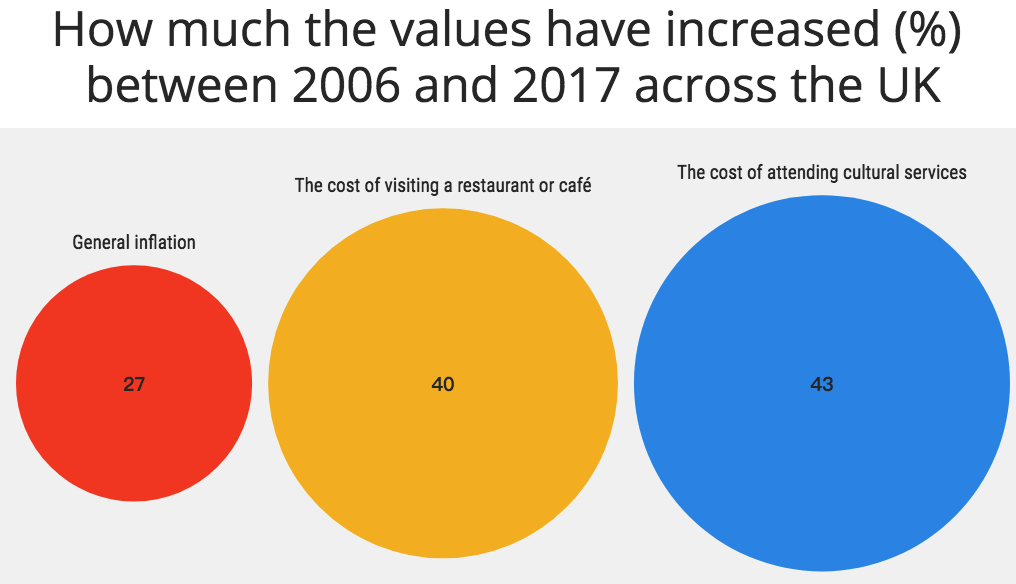 Comparison between the rise of general inflation and cost of cultural and leisure activities Statistics: GLA Economics; Graph: Leyi Chen

However, people do enjoy spending their nights in London.

Lena Dai, a tourist from Australia, told us: “It’s a very big city and there’s a lot to do. It never sleeps, so there’s always something to do everywhere you are.”

Al Godil, who was having a night out with his wife, enjoys London for its diversity.

“It’s a mixture of everybody, a rainbow of people. Almost every other person is speaking a different language here.”

Even though people are bothered by the expensive cost, they do not think that it can be fixed any time soon.

Jamie Hayward, who was having a family night out, said: “It’s supply and demand. The demand is [so high], there are so many people, so they will pay a lot more.”

Edwards added: “Because it’s such an attractive city, and when it’s attractive, it brings in many people with a lot of money, and money brings with it raised rents, raised costs, and anything that goes with that.”

The report also reveals that 1.6m people, which makes up of one-third of everyone working in London, work at night. Night workers most typically do health and social work, work in professional services such as service occupations and the culture or leisure sector.

With a number of 594,000, cultural and leisure activities is the category with the most employee jobs out of all the night time industries in London in 2017, making up of 37% of all night time jobs in London. 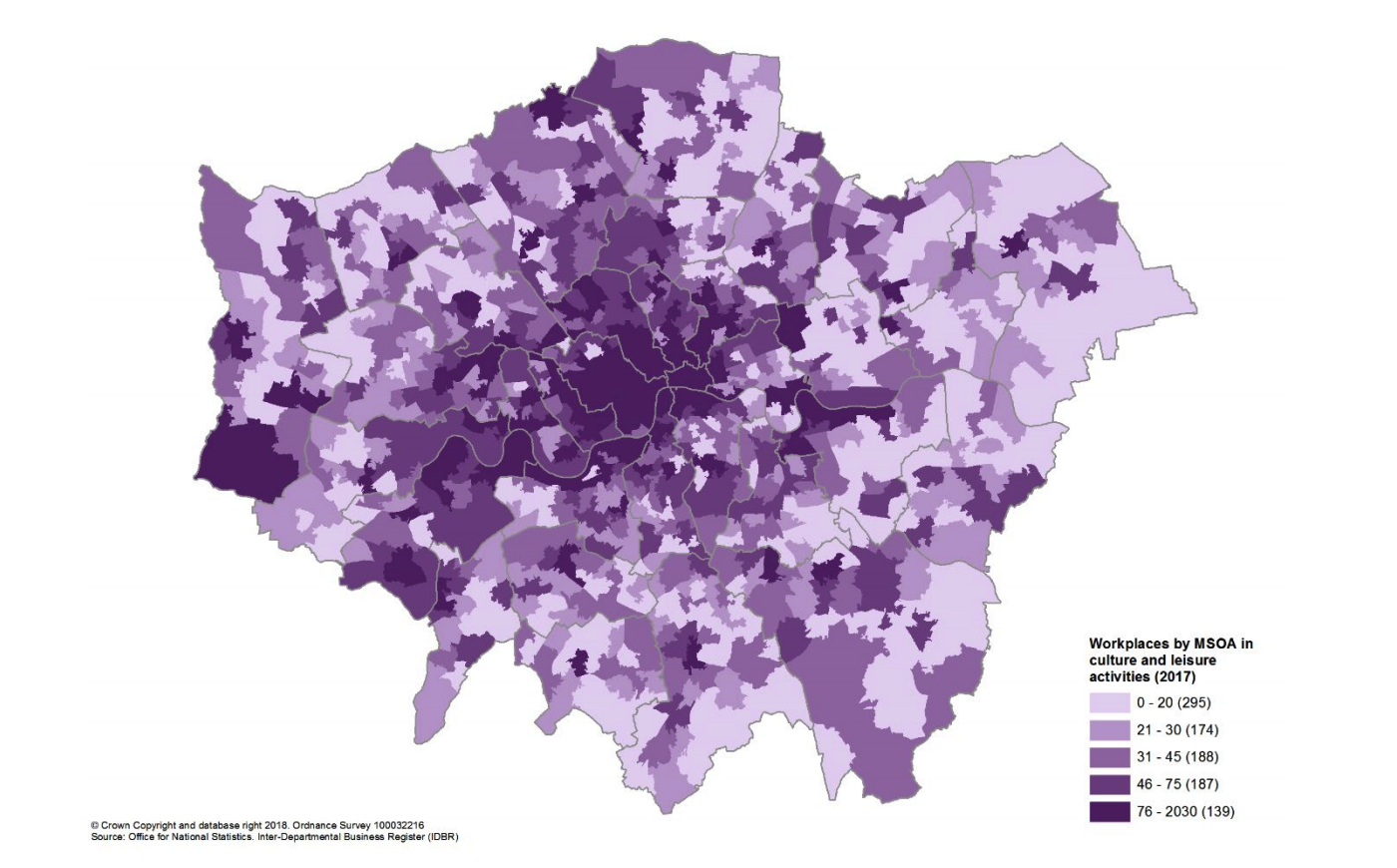 Concerns are also raised about the fact that more than half a million night workers are paid below the voluntary London Living Wage, which was raised to £10.55 per hour in Greater London this week.

Amy Lamé, London’s Night Czar, said to the London Assembly: “We are determined to make sure the capital works for everyone at night – whether you are working, shopping or going out – and we will use this report to deliver the Mayor’s vision for London as a 24-hour city.”

Sadiq Khan, the Mayor of London, said that they would work hard to create a nightlife that could meet the needs of everyone.

“There’s no doubt that the night-time economy is a key part of the success of our capital… but as jobs and the demand for services at night grows, we have to make sure London is a city that works for all Londoners at all hours.

“Every Londoner is entitled to a decent standard of living – no matter what time of day or night they work.”