As ‘Super Saturday’ came to a close after a tense debate in the House of Commons, Members of Parliament voted to delay the government’s Brexit deal by 322 to 306 votes

The government was defeated in the House of Commons today in the first Saturday sitting of the House in more than 35 years.

MPs voted in favour of an amendment on legislation concerning the new Brexit deal which had been agreed at the end of the European Union summit three days ago.

Prime minister Boris Johnson had hoped to secure the backing of all of his own MPs and many others from across the House.

But his hopes were dashed when a majority of opposition MPs failed to back his deal and voted in favour of the amendment in order to avoid the government taking the United Kingdom out of the EU without a deal.

All but five of the 288 Conservative MPs had voted against the amendment and were joined in the division lobby by six Labour rebel MPs and 17 independents.

Voting for the amendment were 230 Labour MPs; all 35 Scottish nationalists; all 19 Liberal Democrats; all 10 Democratic Unionists; all four Plaid Cymru members; all five from The Independent Group for Change and one Green.

It is known informally as the “Letwin amendment” after backbench Tory MP Sir Oliver Letwin, who led the cross-party grouping of MPs who tabled it.

The amendment is intended to guarantee a delay to the government’s deal being put before MPs for a vote until the necessary legislation has been implemented. 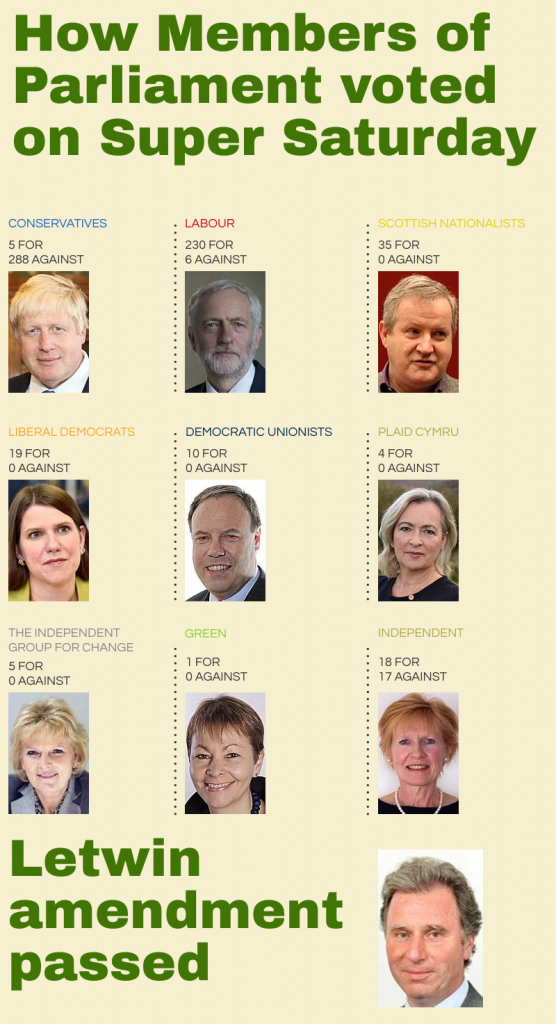 And the so-called “Benn Act”, piloted by Labour MP and Chair of the Exiting the EU Committee Hilary Benn, obliges the prime minister to request a three-month extension of Article 50 if his deal has not been passed by MPs by 11pm tonight.

Had the Letwin amendment been defeated, Mr Johnson would have been able to bring his deal forward.

But the Letwin amendment has pushed the vote on the government’s deal back.

It is expected that MPs will vote on the deal sometime next week since the 11pm on October 19 deadline has not been met.

After the result of the vote was announced, Mr Johnson seemed to indicate that he will try to work a way around the Benn Act, telling MPs:

“I will not negotiate a further delay with the EU – neither does the law compel me to.

Since I became prime minister, I have said that we must get on and get Brexit done on 31 October, so that this country can move on. That policy remains unchanged – no delays.”

“The prime minister must now comply with the law. He can no longer use the threat of a no-deal crash-out to blackmail members to support his sell-out deal.

Today is an historic day for Parliament because it has said that it will not be blackmailed by a prime minister who is apparently prepared, once again, to defy a law passed by this Parliament.”

Boris Johnson's deal has been defeated. He must now obey the law – there cannot be a No Deal crash out from the European Union.

And we must give the people the final say on Brexit. pic.twitter.com/0aTmNSXDEl

Jacob Rees-Mogg, leader of the House of Commons, said that MPs would likely have a chance to debate and vote on the deal on Monday.

If this goes ahead, it means that debates already scheduled to take place on the Queen’s Speech could be removed from the Order Paper and rescheduled.

The Speaker of the House of Commons John Bercow is yet to decide on whether the government’s next course of action will go ahead as planned.

Parliamentary copyright images are reproduced with the permission of Parliament