London has the highest health costs related to air pollution in Europe. Follows Bucharest with £5.75 billion, only half of London’s expenses.

The European Public Health Alliance has published a report which studies the health costs sustained by the biggest European cities to face sanitary problems and illnesses related to air pollution.

The research, based on data from 2018, sees London as the city with the more significant health costs caused by pollution, with its £10.32 billion spent yearly. The second and the third highest in the UK are Manchester (£2.18bl) and Glasgow (£658ml), respectively ranked 15th and 19th between the 432 European cities analysed.

All these diseases can be the result of the exposure to air pollutants, especially nitrogen dioxide and particulate matter: liquid or solid particles whose presence in the air is mainly associated with transport emissions.

The remaining 76.1% is the cost of premature deaths caused by those same diseases. According to the WHO, over 500,000 premature deaths in Europe are attributed to the exposure to air pollution – making it the fourth risk factor for death, right after high blood pressure, diet and smoke.

In 2015 London alone counted more than 9,000 air pollution-related premature deaths, but the situation is slowly improving. In the last four years, the number of Londoners exposed to illegal levels of nitrogen dioxide has fallen per cent (from 2 million in 2016 to 119,000 in 2019).

The levels of the polluting agent diminished by 44% in central London’s streets thanks to several measures taken to promote cleaner travel by the current mayor Sadiq Khan. These include charges for dirty vehicles when entering the city centre (ultra-low emission zone), the ban of diesel taxis, the use of low-emission public transport and the enhancements of cycling spaces.

Khan told the Guardian this benefits citizens as well as the NHS:

“I’m pleased that Londoners are breathing cleaner air and that we’re saving the NHS billions of pounds.”

Plans for further improvements include the extension of the ultra-low emission zone to cover all inner London as soon as next year and to meet the legal levels of nitrogen dioxide in the whole city by 2025.

Nevertheless, London is still by far the first city for air pollution-related health costs. The reason for this is that the total amount of the expenses needs to be contextualised within the size of the city and its population.

If we calculate the per capita cost for Londoners, we obtain a yearly expense of £1173.

In this perspective, the worst city out of the 432 considered becomes Bucharest, with an expense of £2725 per person, followed by Milan and Warsaw. In the UK, the worst cities after London are Bristol, Aberdeen, Belfast and Leeds. 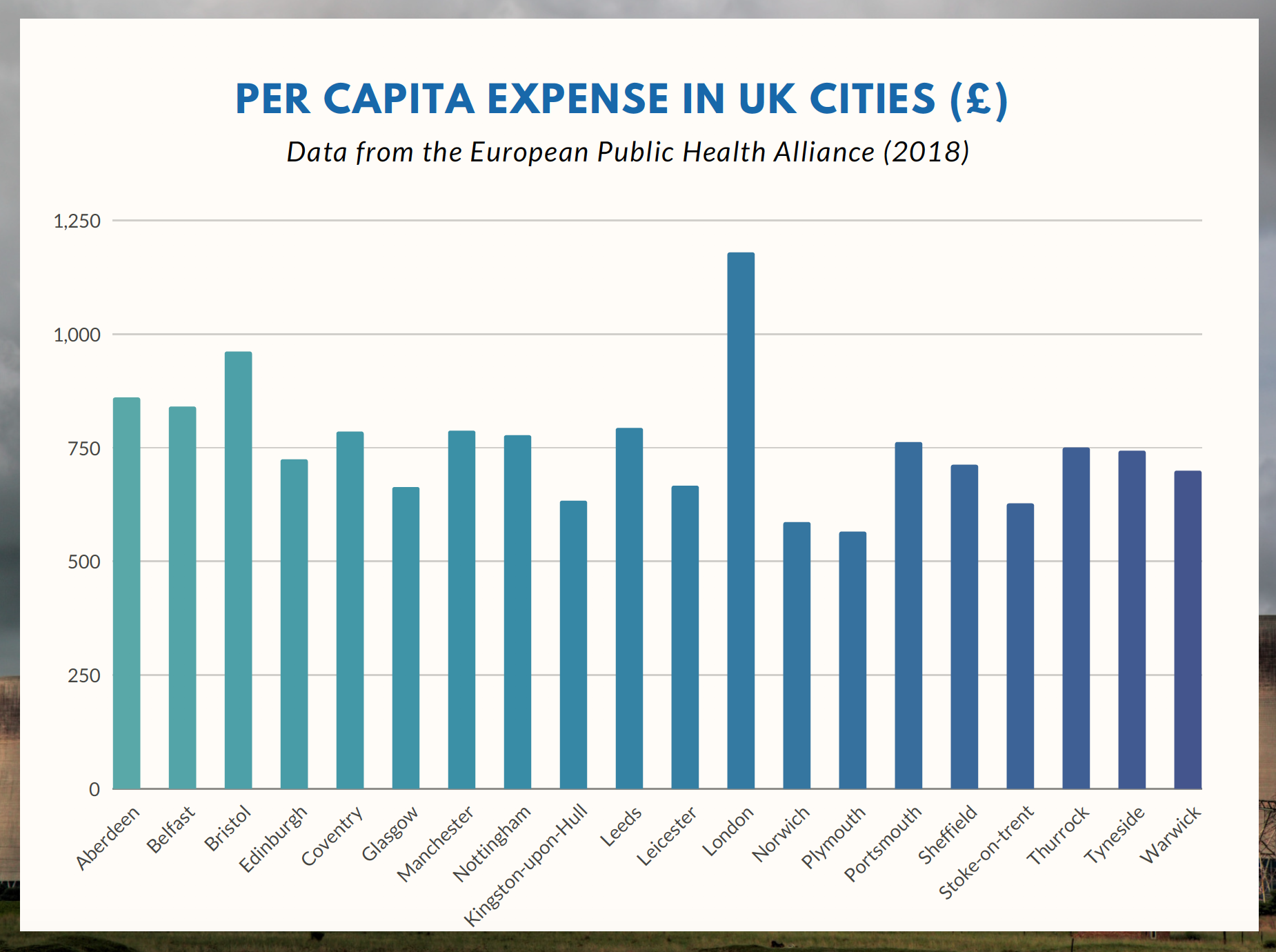 The data included in this research was collected before Covid-19, but it is important to have an overview of how the pandemic and air pollution affected each other.

During the lockdown period, the world saw clear improvements in air pollution levels which sadly didn’t last long once the cities reopened. Another important consideration is the correlation between air pollution and the Covid-19 pandemic, as those suffering from conditions caused by exposure to air pollution have a higher mortality risk when infected by the virus. This effectively makes air pollution a relevant contributor to Covid-19 mortality.

It is clear that, although a lot of the time we may not realise it, air pollution causes us more harm than the obvious. Improving air quality in our cities is not just a favour to the environment, to future generations and to the NHS’s pockets, but also a big help to our very own health and immune system.

To know more about environmental issues around London and the new green initiatives click below: