PSG and Istanbul Basaksehir join QPR and Millwall in the battle against racism, as they make walk off the pitch in response to racist remarks made by the fourth official to one of the coachings staff

Tuesday night’s group H Champions League tie between PSG and Istanbul Basaksehir was postponed after players walked off the pitch and refused to play. The situation that sparked this decision occurred between the fourth official and Istanbul coach staff Pierre Webo was caused by the Turkish fourth official was overheard calling the coach a “Negru.”

– England’s rugby sevens lost their funding. Can they save their Olympic dream?
– NHS Test & Trace: behind a student’s screen

In Romanian, the word “Negru” means black, similar to the word “negro,” which was responsible for the outcry from both benches. European match officials are all required to speak English when officiating matches so the use of this word in the situation was deemed as racist by both parties resulting in them walking off.

This is the second incidence of battling the on-going situation of racism in the footballing world after Millwall fans were heard booing their players as they took a knee in protest against racism. The Millwall Supporters’ Club tried to defend their actions in a post stating their reasons as “acceptable” because they did not “come to watch a political game, they came to watch football.”

Please read the attached statement from the official supporters’ club of #Millwall FC.

In their match against QPR on Monday night football, the Millwall players joined their London rivals to stand behind a banner. The banner called for “Equality. United for Change,” as Kick It Out continues to take measurable steps to remove racism from this game. 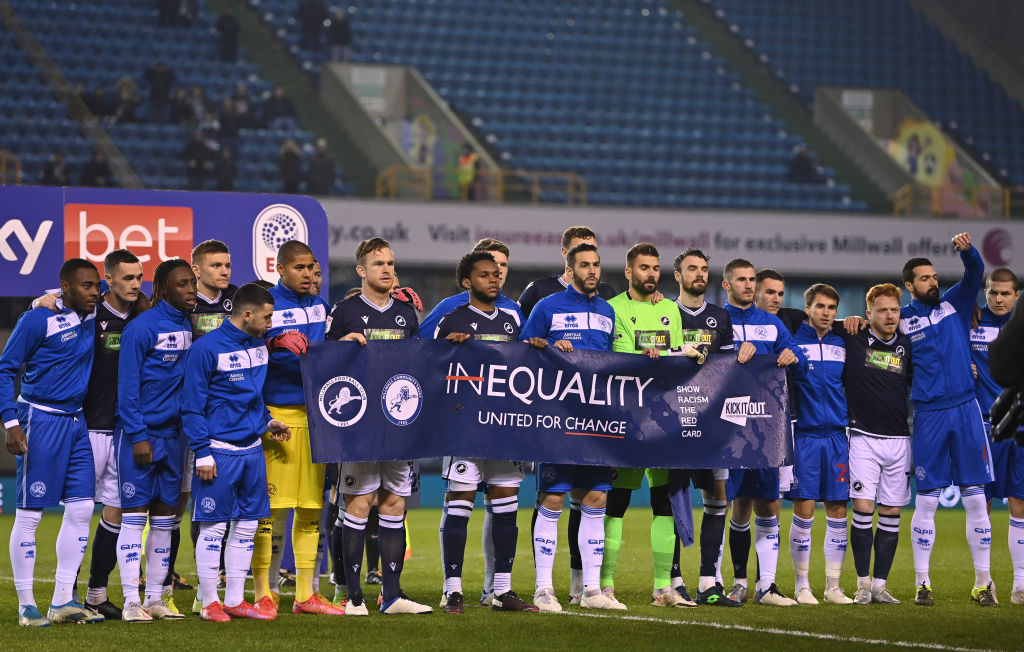 Millwall’s players did not take a knee before kick-off on Tuesday but QPR’s players did, despite stopping the gesture earlier this season. On Twitter, the club communicated to the public that this day was “one of the most important days in the club’s history.” In a letter handed to fans in attendance, the east London club added: “The eyes of the world are on this football club tonight — your club — and they want us to fail.”

QPR midfielder Ilias Chair celebrated his opening goal by taking a knee and raising a fist in front of the Millwall fans, along with teammate Bright Osayi-Samuel.

In a post-match interview with Sky Sports, Chair said: “[We] felt that we needed to do that — especially here, so I think it was a good thing to do.”

Who is Kick It Out?

Kick It Out is an organisation that was set up in 1993 to campaign against ongoing racism in football.

Their core aims are as follows:

Kick It Out continues to play a key role in achieving equality not only on the pitch but behind the scenes as well. To find out more here.