He died yesterday morning at 7 am, in his home in Trastevere, Rome. The mortuary was arranged for today, starting at 10 am until 7 pm tonight.

Numerous important figures from the Italian public scene showed up, from the colleague director Roberto Taviani, to the former Italian prime minister Walter Veltroni to the capital’s mayor Virginia Raggi. Countless fans where there as well, to pay tribute and say goodbye to the filmmaker.

Respects were payed and thoughts sent from abroad as well, from the cinema to the art and the journalism industry. Here are some of them: 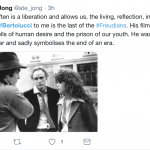 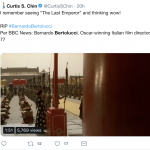 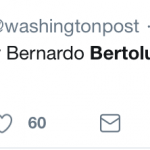 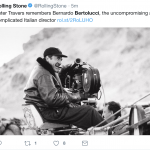 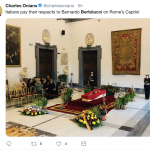 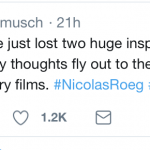 Bertolucci wasn’t only known for his movie, though. Besides his remarkable career in cinema, he was a poet, writer, a sharp thinker and an international movie star.

Within his best works stands The Last Emperor, which won two Golden Globes (for best screenplay and best director) and two David di Donatello, among other awards and mentions.

This, though, is just one of the many Bertolucci’s movies worth mentioning, remembering and watching, again and again.

Here is a list of five best movies by Bertolucci selected by Voice of London:

Based on a novel by Alberto Moravia, and starring Stefania Sandrelli and Jean-Louis Trintignant, the movie tells the story of a man who thinks he has committed a homicide. In an attempt to live a normal life, he joins the regime and becomes a hit man. The movie won a David di Donatello and had an Oscar and a Golden Globes nomination.

The movie tells the love story of a grown widow man and a young and rich girl. With two Oscar and two Golden Globes nominations, the screenplay won a David di Donatello and a Nastri d’Argento award.

The film is about the tragedy of a man whose child is kidnapped. It may be less known, but it provides an interesting human insight. It was awarded at the Cannes Festival and won a Nastri d’Argento award.

The screenplay is about the life of Puyi, the last emperor of China. Probably the most famous of Bertolucci’s movies, it was awarded 9 Oscars, 4 Nasti d’Argento, 9 David di Donatello and  4 Golden Globes.

The last movie directed by Bertolucci is based on the namesake novel by Niccolò Ammaniti. It explores the relationship between Lorenzo and Olivia, two young kids, during a trip in the mountains. It won 2 Nastri d’Argento and was nominated for 6 David di Donatello, making 1.6 million euros at the Italian box office.