Not only is Dishonored 2 a perfect echo of the ethos that earned its predecessor a Game Of The Year title 4 years ago, it will also seriously make you question how much of a sociopath you are.

Set 15 years after the Dunwall plague, Dishonored 2 is injected with much needed colour through tanned European architecture and healthy greens, no longer consumed by muddy darkness. The now reigning Empress, Emily Kalwdin, protected by her father and bodyguard Corvo Attano, are once again overthrown by the witch, Delilah. With a much more engaging storyline, the player is encouraged to care about their approach to certain characters as it will affect the outcome of the game. 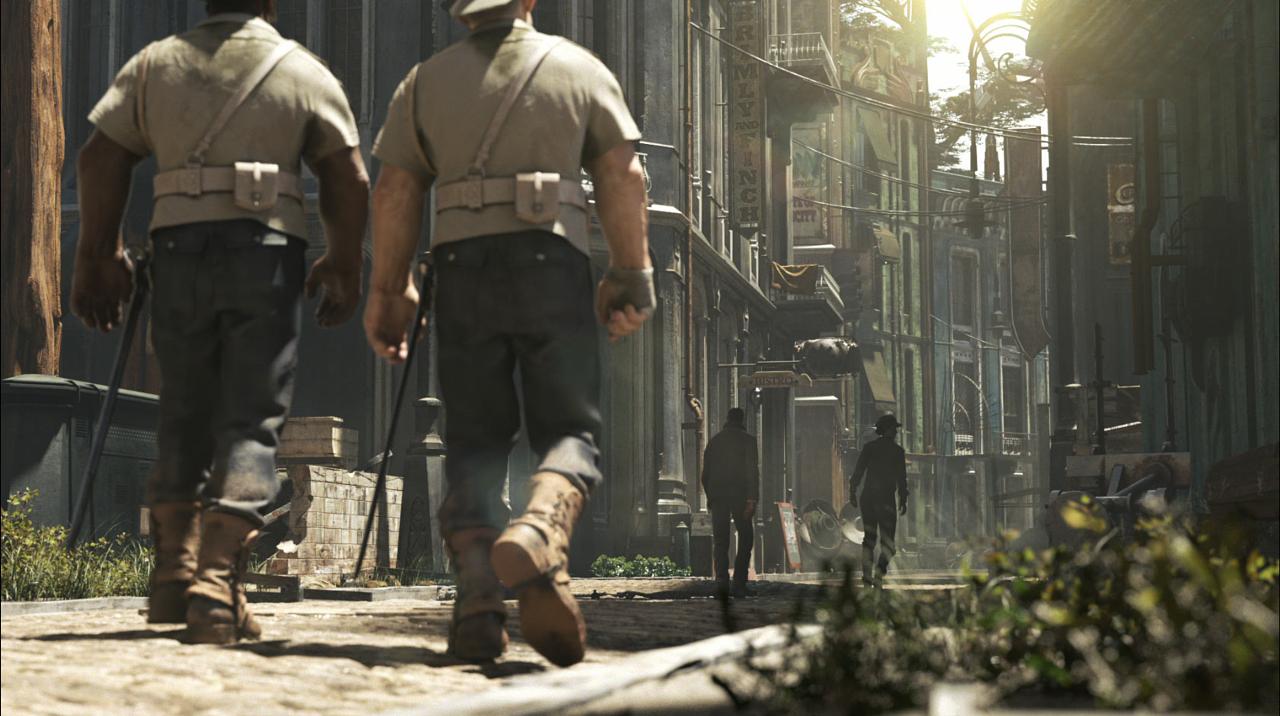 The new city, Karnaca, has some much needed life through wider ranges of colour used. (Bethesda)

The game pushes you to dare, try and fail to fully explore your options in getting to your goal. With a more vertical map, players are encouraged to be aware of their entire surroundings. When I teleported to a balcony three floors up to get away from the walking centurions below, I found I only traded rocks and corners to hide behind for beds and closets – dangerous guards still lurked in the hallways. The world is so much more interactive, aided by random notes or conversations from guards detailing new and unique opportunities to achieve your mission. For example, I discovered that there was a disused electric chair that sounded much more promising than shoving a blade in my target’s throat. My goal had now changed to luring the target to this place instead, without any on screen prompt from the game. Dishonored 2 makes you feel confident to try it because you know, somehow, it’ll work.

This amazing improvement is ironically the reason I always die. The game, unlike its predecessor, seems to punish players for choosing an easier and chaotic approach. Between Corvo and Emily, the two playable characters, Emily is arguably more designed for a stealth playthrough due to her new range of supernatural abilities. And because these games bring out the sociopath in you, I chose her.

In the fourth chapter, the protagonist is required to approach a mansion that has an entire district surrounding it. I choose an open courtyard, risking the lack of cover in exchange for less of guards.

I reach out to a ledge above an unsuspecting enemy with Emily’s new “Far Reach” ability in order to drop assassinate. Damn, he’s not so unsuspecting now that I missed the ledge and plopped myself an inch in front of his face. Time to let him kill me.

I try again, this time linking three guards fate together with her “Domino” ability. Once I fling just one of them to a disintegration fence, they all fly in that direction. Except for one, who sadly doesn’t make it to the fence and lands in front of the guard I was in breathing space with a second ago. I swear he looks at me with a sense of disappointed déjà vu, as if the restart didn’t wipe his coded memory. Yes, I did just restart the game a second ago, and yes I will be doing it again now, and yes you can stop judging me.

By my fifth attempt through this courtyard, I have pretty much memorised the number of frown lines in the poor guards faces because I’ve found myself stumbling that far in front of them. It’s like when your friend insisted on trying for the billionth time that he can indeed do a backflip that won’t break his neck. It loses its novelty after a while. 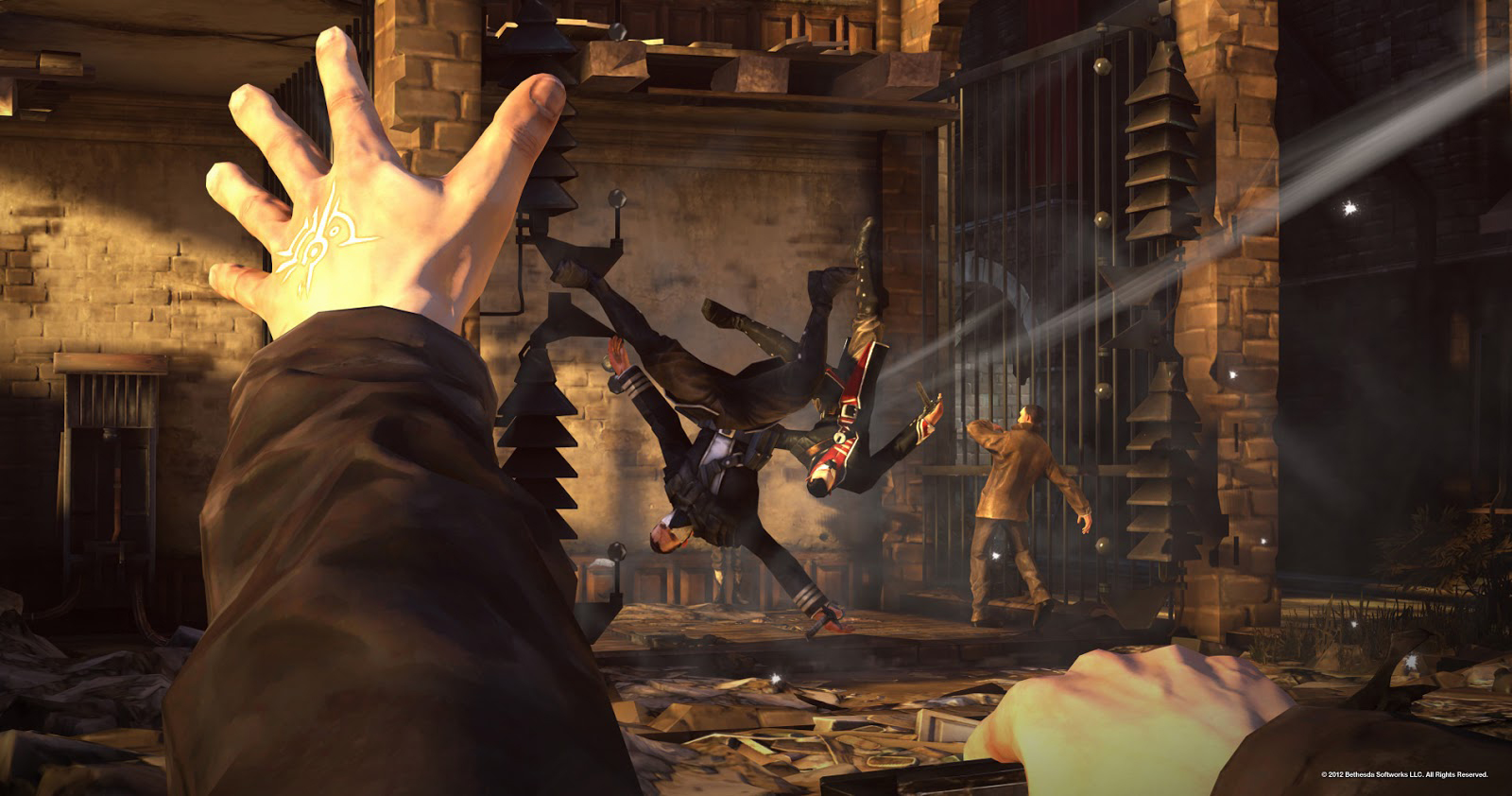 But I’m so glad the same cannot be said for Dishonored 2. These mishaps beautifully encapsulate the middle ground between linear platforms and open world gaming. Although this courtyard is such a small part of the game, these new abilities give birth to a wide arsenal of creative and innovative ways to progress through the game and my OCD, now in overdrive, wants to experience as many of these ways as possible. For the first time, in a long time, I have a valid reason to immediately play the game again knowing I’ll get a different experience. And with game price points of £45 and up, this is sorely needed.

While I expected some frame rate issues for a game that is packed with so much expansion, the clunky feeling of traversing rooftops and streets normally feels a little disorientating. Regardless of whether or not this was intentional to push you to experience more of what the game has to offer, it was an unwarranted aspect that only held me back from fluidity in the movement.

Nevertheless, Dishonored 2 breaks boundaries with how players can experience the game. While, open world’s such as Skyrim and Fallout offer freedom of direction and narrative, enclosed yet incredibly detailed maps with numerous possibilities makes for a more immersive and enjoyable experience.