Food is a big part of everyone’s lives (especially mine)… pretty much ever since anyone can remember. It helps us grow, helps us get energy and has made us all “strong boys”. Queue the Pinocchio imagery, please. Food is all people think about when say, stressed, happy or sad.

Many people say that after a breakup, one should buy a large tub of ice cream (and cry their heart out) or, when feeling happy should order a takeout pizza. Aside from the gratification one gets when opening the pizza box to reveal its contents or, carefully peeling the lid off the ice cream; Milica Cosic set out to find out why food has the effect on us that it does?

Milica spoke to three nutritionists, all with different backgrounds, who answered her questions and queries about the link between emotion and food.

Leah Butler Smith has nearly 30 years of experience in the field of neuroscience where she researches the minds and behaviours of her patients. Milica also interviewed a qualified nutritionist, Ondrej Matej. Ondrej specialises in vegan and vegetarian lifestyles and has more of a holistic approach to food and dieting- which focuses particularly on the mind-set of dieting and training. Jo Travers also spoke to Milica about food and emotion. She is ‘The London Nutritionist’ and a registered Dietitian. As well as having a prominent role in the media and on print, she is also a spokesperson for the British Dietetic Association, which is a body in the UK that represents the dietetic workforce.

Q1. Is there a scientific correlation between food and emotion?
“Food and mood are closely related,” says Jo. Ondrej goes further to say that there are “many instances your stomach chooses what it wants and sends the impulse to the brain.” For example, the brain knows when you are food shopping whilst you are hungry and therefore, you end up buying more because “you need to fulfil your emotional hunger.” Talking about emotional hunger, Jo says that “on the one hand, there is the psychological prop of having something comforting, and on the other, there is the biological need for nutrients.”

Q2. Can eating ice cream be scientifically proven to help cheer us up?
There is a study which is entitled “does ice cream make you happy?” and, findings show that the brain mostly responds in a positive emotional attitude. Leah says that “every part of the eating of ice cream had some positive experience in the brain.” Furthermore, there is also a close link to childhood experiences and say, how ice cream was often given as a treat. Aside from the joy ice cream brings, Leah says that the way the “sugar hits the pleasure centres of the brain in a physical way, releasing neurotransmitters like ‘dopamine’ to give us a rush of ‘happiness’.”

Q3. The saying “eat to feel better”, does it actually work?
“Absolutely!” exclaims Ondrej. Leah says that eating to feel better is also effective in someone who is in an emotional state of change as, “eating releases neurotransmitters that help us know when we are being fed, and when we are full.” Leah also says that, in a more technical sense there are foods which act in a certain way that affect our mood. For example, foods that are high in glycemic (for example cola) can give us a burst of energy but, will leave us feeling deflated afterwards.

Ice cream has been scientifically proven to make you feel better. And, you are craving one right now! Image: Milica Cosic

Q4. How does your brain respond to food which we connote to making us feel better e.g. chocolate, ice cream, sweet treats?
Ondrej says that our brain and body is addicted to sugar, however, “long term abuse leads to diseases.  So, moderation is advisable.” On the contrary, Jo gave an example where a subject had an awful day and decided to have a takeaway which lead to them feeling fine but, afterwards the person felt sick and guilty. Jo says that “food is often used to celebrate or as a bonding experience so it can be a shortcut to feeling.” Leah also goes further to say that, “we can experience chemical reactions to foods that are less healthy simply because they activate those pleasure centres.”

Q5. Why do we sometimes crave particular foods?
If one is lacking in a particular food or not eating enough, the body will crave it. Many times, the body naturally craves carbohydrates, especially sugar, because it is a source of quick energy, or something fatty when our brain looks for something more filling. Sometimes, Jo says, we crave a particular food because it is “cultural.” Jo has found that women in countries like the United Kingdom or the United States of America crave “chocolate around the time of their period.” However, Jo says that it varies in different countries. Leah also says that “our body and brain is very wise and has recorded unconsciously the properties and benefits of eating certain foods.”

Q6. Is there a connection between unhealthy foods and both negative and positive emotions?
Unhealthy foods are usually very calorie dense, in the sense that they are processed or contain harmful ingredients. More nutritional foods are lighter and have higher levels of energy. Therefore, “we are control of our destiny and able to do what we want.” Leah gives the example that if we either eat a board of cheese and biscuits or a greasy burger, it is because we are in need of it and thus, “feel a sense of satisfaction that we made a choice.” Therefore, there is a sense of connection between the foods we crave and the emotions we show, even if the food we eat is healthy or unhealthy. 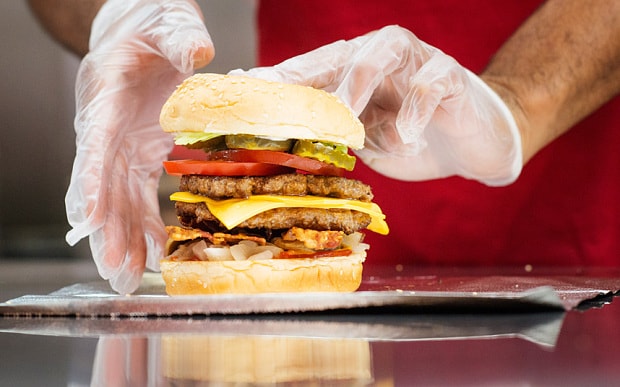 It has done its magic. Just looking at this sandwich and you are already craving four. Image: Milica Cosic

Q7. Are we responsible for eating foods that make us feel good or are the foods responsible for making us feel good?
Leah says that it is both. Ondrej asserts that “better and healthier food will bring a better life.” We are individually responsible for making good and well educated choices. We have pre conditioned ourselves to have an emotional response to food and through this, food is also vital for good brain function and “protects us from mental health” says Leah.

Q8. Do you have any tips on controlling how you eat in relation to how you are feeling?
Leah gives some good pointers. She says that “education is key.” Along with this, she also says that meditation can “rewire your brain for better mood management and health.” Ondrej expresses that we should always “read the ingredients” on everything we buy and, to have an overlook on the lifestyle you lead, which includes exercise and mindset. Jo gives the example that when we feel miserable, we should not have the mindset that a takeaway pizza or curry for example, will change your mood. Jo says that “Although by eating a takeaway curry you were intending to treat yourself well by giving yourself comfort, actually the opposite is true.” She says that this mindset “will lead to a cycle of guilt and frustration.”