With COP26 just a few days away, lots of Londoners are thinking of ways to get involved with the climate conference from here in the capital.

Local environmental groups have planned protests and educational events, as well as long journeys to Glasgow in the hopes to put pressure on the government.

COP stands for ‘Conference of the Parties’, and this is the 26th year it has taken place. World leaders will gather in Glasgow on 1st-12th November to plan how they can reach net-zero carbon emissions, as recommended by climate scientists on the Intergovernmental Panel on Climate Change (IPPC).

Check out the ways in which Londoners are taking part…

There are lots of mass gatherings planned in and around the capital in the run up to, and during, the climate conference.

Organised by local groups such as Extinction Rebellion London and Friends of the Earth, they aim to bring attention to COP26 here in London.

From fun bike rides to ‘die-ins’ where protesters lie on the ground to make a statement, there are lots of ways to participate.

The main planned event is the Global Day of Action on 6th November, where people will gather all over the world to remind governments that the world is watching them. Check out our interactive map for details of each event. 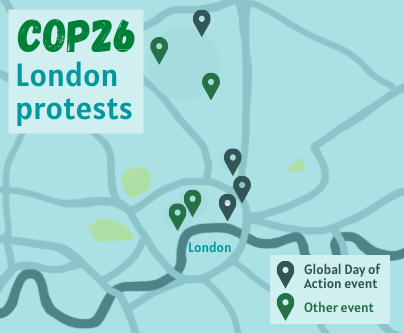 Map: Sarah Chaffey. Click here to interact with our map.

Some keen activists are cycling all the way from London to Glasgow to make their voices heard. Rose, who is riding with the organisation Not One More told Voice of London about her journey so far: “It’s been amazing, such a lovely group of cyclists and support crew.”

When we spoke to Rose, she had just arrived in Birmingham, after staying at various environmental camps in the South of England: “We’ve had some really interesting visits to people living in treehouses to protect the woodland that is being cut down for HS2.”

Not One More supports activists on the frontline of climate activism in the Global South, such as Cambodia and Brazil. Speaking about the group’s motivation for attending COP26, Rose said: “It’s more than just the climate, we listen to the voices of the people on the frontline, especially in local communities that are being destroyed at the cost of capitalism.”

Once arriving in Glasgow, Not One More will join with other grassroots groups to demand action from world leaders at the conference.

Rose is also a musician who writes songs about her aspirations for system change to fight environmental issues. Here she is with the rest of the Not One More crew on their epic journey to Glasgow:

To make sure everyone can get involved with COP26, no matter where they are, activists have set up the COP26 Coalition organisation. They hold local meetings, organise demonstrations and help protestors get to Glasgow safely.

They have a homestay network, which brings hosts and guests together to ensure everyone has a place to stay when they get to Glasgow.

But as well as arranging logistics at the conference, they also have many local networks to allow people to take part from anywhere in the UK.

🌍 In 2 weeks, world leaders will meet at the global climate talks #COP26 to discuss our future. Wherever you are in the world, join us in bringing #ClimateJustice to COP26.

London clubs include Hackney, Enfield and Haringey, and a London-wide group, who are joining with Extinction Rebellion London to organise demonstrations before and during the conference.

Speaking at a meeting in Enfield and Haringey, Esther Lutz Davies, the London Lead Mobiliser of the COP26 Coalition Hub said:

“The decisions made at COP26 will shape if governments respond to the climate crisis or not. They will decide who will be saved, who will be sacrificed and crucially, who will make a profit.”

Although the flagship movement will be taking place in Glasgow, Londoners will play a big role in mobilisation, says Esther: “Wherever you are in the world, now is the time to join the fight.”

Whether you want to actively participate in demonstrations, or just learn a little more about COP26 and the climate crisis, the Voice of London will be covering everything going on at the conference, so stay tuned.