A new BBC report has highlighted some subtle hypocrisies within the university sector. Whilst the fees for undergraduate degrees have been subjected to the highest rates lawfully permitted – postgraduate courses have had not had the same regulations.

The article included a short list of universities that tend to have this problem, “if you study history at Bristol University at undergraduate level, its costs £9,250 – but a one-year MA course at the same university is £8,300.”

BA courses have been universally capped at £9,000/£9,250, whilst the costs of MA degrees vary depending on the university or course. The Glasgow School of Art offers MA degrees at the cheapest rates in the UK, at £2,340 (for Teaching/Supervision courses).

New #Which? survey finds #London is most expensive city for #Students in the UK, with average living costs at £14k per year (not including tuition fees) @itvlondon @GMB

So why are competitive rates for university degrees allowed with postgrad courses, “which in theory should cost more”, whilst first-time university go-ers have to suffer with crippling amounts of debt?

As of this year, the current student loan debt for the UK stands at a whopping £100.5 BILLION – a £15b increase from 2017 and almost doubling from 2014. A figure this high poses many questions, primarily; is it realistically ever expect to be paid off? 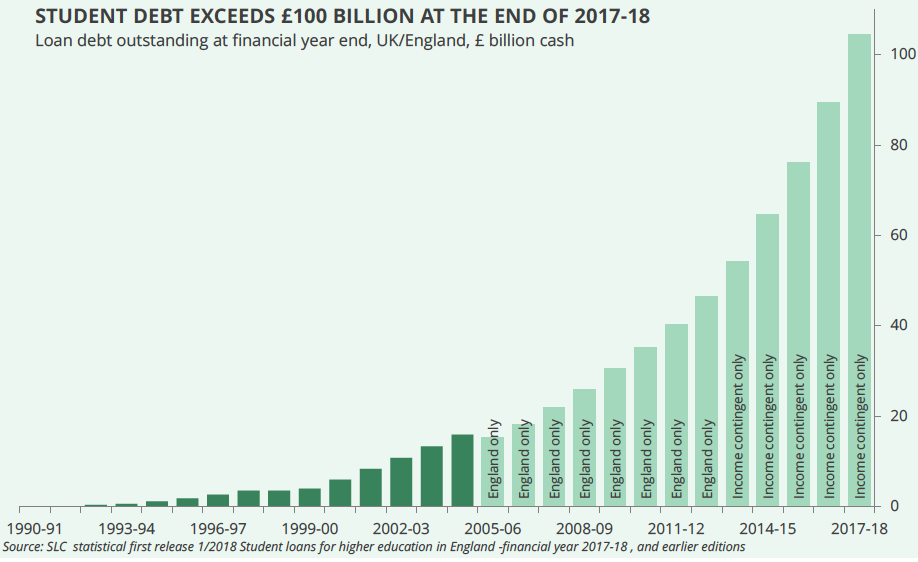 According to the Institute of Fiscal Studies 2017, the average student in England will graduate with debts over £50,000 – and those from less affluent backgrounds could have to take out more loans, accruing even more debt. The IFS estimated that 83% of graduates would not be able to pay off their whole student debt by the end of the 30-year period, after which all remaining student debt is wiped away. 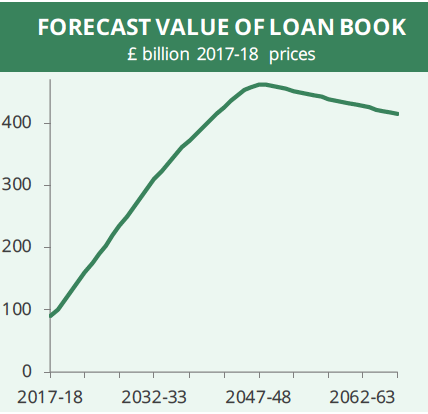 On 16thAugust, UCAS released data of university stats for the following 2018/19 academic year in succession to A-Level result days. In England, a record of 27.9% of the 18-year-old population were accepted through UCAS. In total, more than 400,000 people across the UK were accepted into an undergraduate scheme – not including students accepted through Clearing. These numbers indicate that more of us are going to university but are less likely to pay off their student debt – only 17% of undergraduates across the UK are likely to pay off their student loans in full.

The House of Lords economic affairs committee revealed evidence that the student loan book would grow to over £1 trillion over the next 25 years, according to the BBC. “It calls for immediate reforms – such as cutting interest rates on repayments and restoring grants for disadvantaged students.”

The sum of student debt has increased so significantly just over a one-year period it begs the question; would these be sufficient enough solutions to decrease the number, or even slow the rate at which it’s increasing?

Those of us studying in London understand that a university education can be a big expense and probably have to sacrifice some of our pleasures along the way. With the high-cost of university fees, alongside travel and living expenses, and the cost of recreational activities make London the most expensive city in the UK- 54% more expensive than living in Manchester (the second largest city).

Scotland offers free higher education for its citizens, and also students from the EU but not UK. Some other countries where you can attend university for free or very little cost (as a student from the UK/EU/EEA) include; Austria, Denmark, Finland, Greece, Hungary, Poland, Slovenia and Sweden. France, Germany and Norway are also inclusive of this list – but also offer free/low cost tuition or admin fees for international students, it’s just a matter of finding English speaking courses.

Students in the UK pay up to £9,250 a year for University. This is an expensive cost for students and nowadays it is even cheaper to study abroad!

“A country that offers free tuition is one that emphasises the public good created by higher education. It recognises that individuals educated to tertiary level bring benefits to an entire society. Such benefits include, but are not restricted to, economic growth, high productivity, more active citizens and happier communities,” said Ariane de Gayardon, via Times Higher Education.

Studying in countries where the cost of education is minimal/ free can be beneficial for students in many ways, such as, relieving pressure to work, meaning more time to put into your degree. The French system, where you would only pay a nominal admin fee, proves as an example.

As well as the low cost of university, France provides many benefits for students, including free entry to museums and libraries, discounted travel and over 450 university restaurants where you can enjoy a full meal for as little as 3.25 euros. The cost of living is significantly cheaper, even the capital city, Paris, is 16% cheaper than London.

“We are happy and grateful to not have to think about the huge amounts of debt awaiting us after graduation. You can focus on the studies that matter to you rather than the most lucrative ones,” said Marie-Catherine Beuth, Université Panthéon Assas, Paris.

More US students are going to University in Germany. For cheap. Sign of disruptive pressure on US University system. https://t.co/wKqnhKY7OF

Although many feel free or low-cost higher education should be a standard, there are valid arguments against this. As degrees in France are free people could use the system to do things such as enrolling and completing numerous degrees or dropping out and reapplying. According to Fee.org, 2014 data shows that only 30% of French students get their bachelor degree without resitting a year, only 43.8% make it from first to second year, and 19% leave university with no diploma whatsoever.

Also, one could argue that the volume of student could adversely affect the general standard of education due to bigger classes etc, “my own French faculty made lecture attendance optional, not because they believed students to be self-motivated enough to learn the material on their own, but because there simply weren’t enough seats for all the students,” Bill Wirtz, via Fee.org.