Three online video ad campaigns posted on Instagram by Italian brand Dolce and Gabbana have caused an uproar in China. The campaign was supposed to advertise the brand’s Shanghai fashion show. However, “The Great Show” got cancelled by the Chinese authorities due to accusations of racism over the ads which showed a model trying to eat Italian food with chopsticks. And the disrespectful messages leaked from Stefano Gabbana also the brand’s official account which they claimed were hacked.

Following the negative reaction on Instagram towards the ads, offensive messages were sent out from the D&G’s and the leading designer’s Instagram accounts which later they said those were hacked.

Stefano Gabbana, 56, D&G’s creative director and co-founder posted the screenshot “Not Me” written on it on Instagram, declaring his account was hacked and apologised for the negative content posted on his page.

D&G’s official Instagram account also gave out statements saying that it had been hacked and apologised for distress had caused. Later on, Domenico Dolce  and Stefano Gabbana released a statement expressing how their “dream was to bring to Shanghai a tribute dedicated to China,” and “What happened was very unfortunate not only for us, but for the people who worked day and night to bring this event to life.”

The cancellation of the show has drawn more than 800 million views on Weibo.

Some Chinese netizens expressed a belief that these posts lacked sincerity, and questioning why they wrote the statements in English instead of Chinese. Boycotting the brand has become a massive trend within consumers in China and also worldwide online with people digging out the brand’s inappropriate behaviours in the past. In 2016, their $2395 “slave sandals” caused an uproar for glorifying slavery. Previously Gabbana has provoked similar backlashes on social media for his body shaming comments aimed at Lady Gaga, Selena Gomez, the Kardashians.

Let’s get back a bit, before the show got cancelled, @michaelatranova, a user on Instagram direct messaged Gabbana, conveying her discontent with the ad campaign (all have been deleted from their platforms), showing an Asian model struggled to eat Italian food with chopsticks, remarking that the campaign contained some inappropriate cultural representations.

Carl Jones, PR & Advertising senior lecturer at the University of Westminster, told Voice of London that D&G’s ads strategy is to place high fashion models next to stereotypes of a specific culture in a typical location. As an expert in the field, he would suggest the brand to do ‘pre-testing’, it is to test their messaging before it is broadcasted in the mass media. Then they would know if an ad or PR stunt is offensive. He considered D&G’s PR in China of the apology video was a success, as ‘video apologies’ are not typically used in the West, such as a press release contains apology quotes is the norm in London.

Screenshots of the conversation were sent to Diet Prada, a fashion blog which has nearly one million followers on Instagram.

In the DMs, it appeared to show the designer saying “China is a shit country”, and calling the nation “China Ignorant Dirty Smelling Mafia”, stating if the people feel offended by the ads the brand has no responsibility to take on from this.

Following up, @anthxnyxo, a blogger who has nearly 37k followers, messaged D&G’s official page on the same platform about the racism controversy the brand has involved, and he received similar offensive replies as well. D&G allegedly told the non-Chinese user to eat dogs.

@michaelatranova shared that her posts had been deleted by Instagram. She claimed the images she uploaded didn’t violate the platform’s community guideline.

Hashtag #DGuseChinesetoapologise# has been viewed nearly 400 million times on Weibo.

On Wednesday, many Chinese celebrities, influencers, editors and models withdrew themselves from attending the show as a response towards the backlash. They also issued public statements cancelling further support and cooperation with the Italian brand.

The list included famous actresses Li Bing Bing, Zhang Ziyi, who is known for starring in Memoirs of a Geisha and Crouching Tiger, Hidden Dragon criticised the brand claiming it “shamed itself.”

Editor in chief of Vogue China, Angelica Cheung also withdrew from the show. She reportedly flew back to Beijing from Shanghai as soon as she heard the news.

Estelle Chen, Victoria’s Secret the model of the month released a statement stating she would not walk for D&G.

Chiara Ferragni, Forbes most powerful fashion influencer in 2017, who has 15.5M followers on Instagram, also liked and commented: “karma” under D&G’s news after Mr Gabbana had previously called her wedding dress “cheap.”

Chinese foreign ministry spokesman Geng Shuang, when questioned in a press conference on Thursday said, “We would not wish the case to be raised as a diplomatic affair.” He also added, “Rather than asking the China Diplomacy Department, why not go ask Chinese people about what do they think on this problem.”

People’s Daily, one of the biggest official newspaper of the Chinese Communist Party, released a strong statement after the disturbance happened: “Arrogant, impudent; making humiliating Asians as a tolerable thing, but it’s shaming on itself. Once seeing the situation went wrong then blamed, shifted the mistakes to “accounts hacked”, deceiving itself and the people… No matter how fashionable the brand is, it will not cover its ugliness. Wanting to make money but with no respect; with no respect to China but still wants to make a bonanza, this type of ‘discrimination’ is destined to go broke.”

Many Chinese E-commerce sites had removed Dolce and Gabbana’s products in the rising backlash over the brand’s behaviours so far. Three giants are included: Alibaba, NetEase Inc. and JD.com Inc.

More reactions on the internet 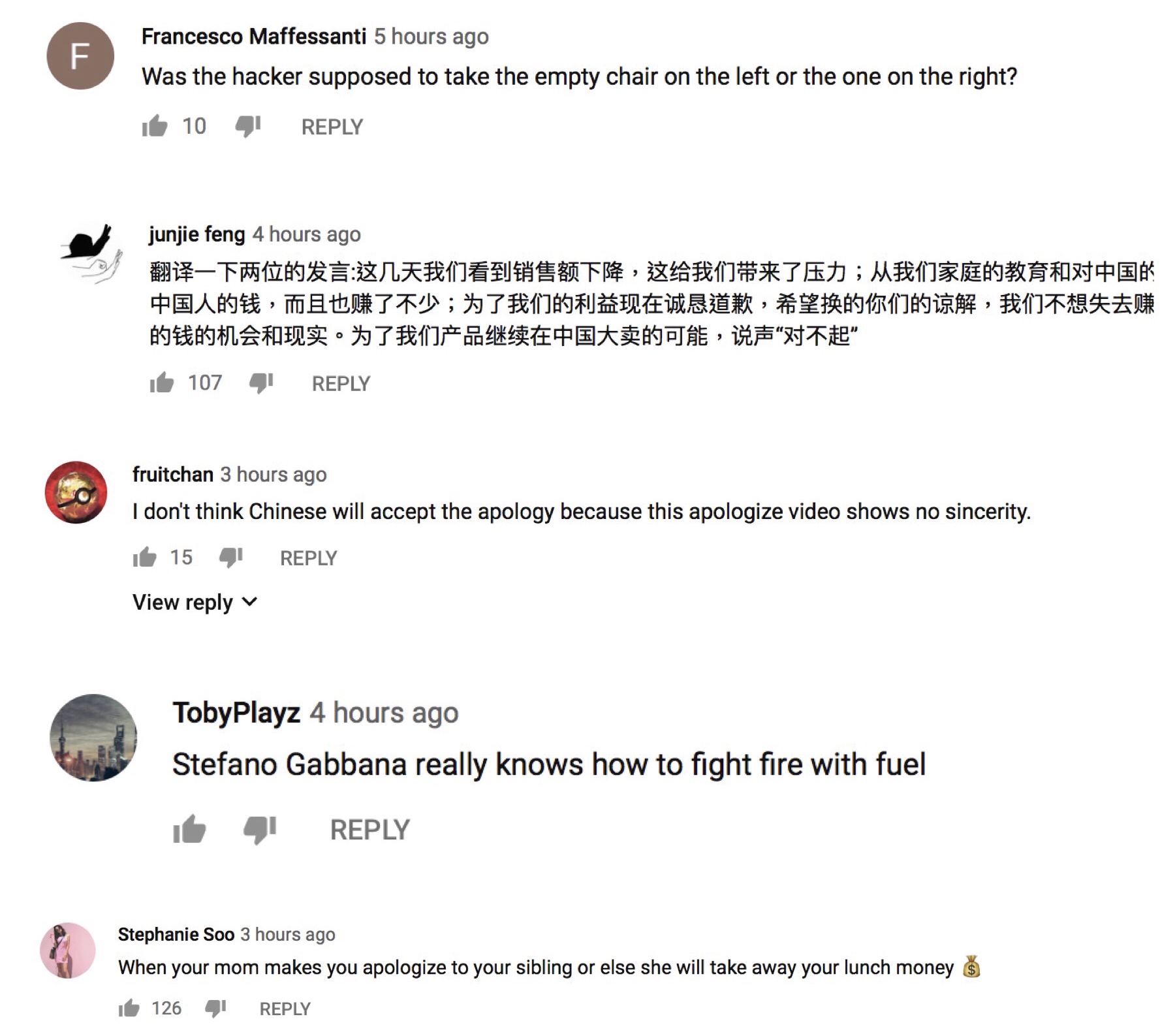 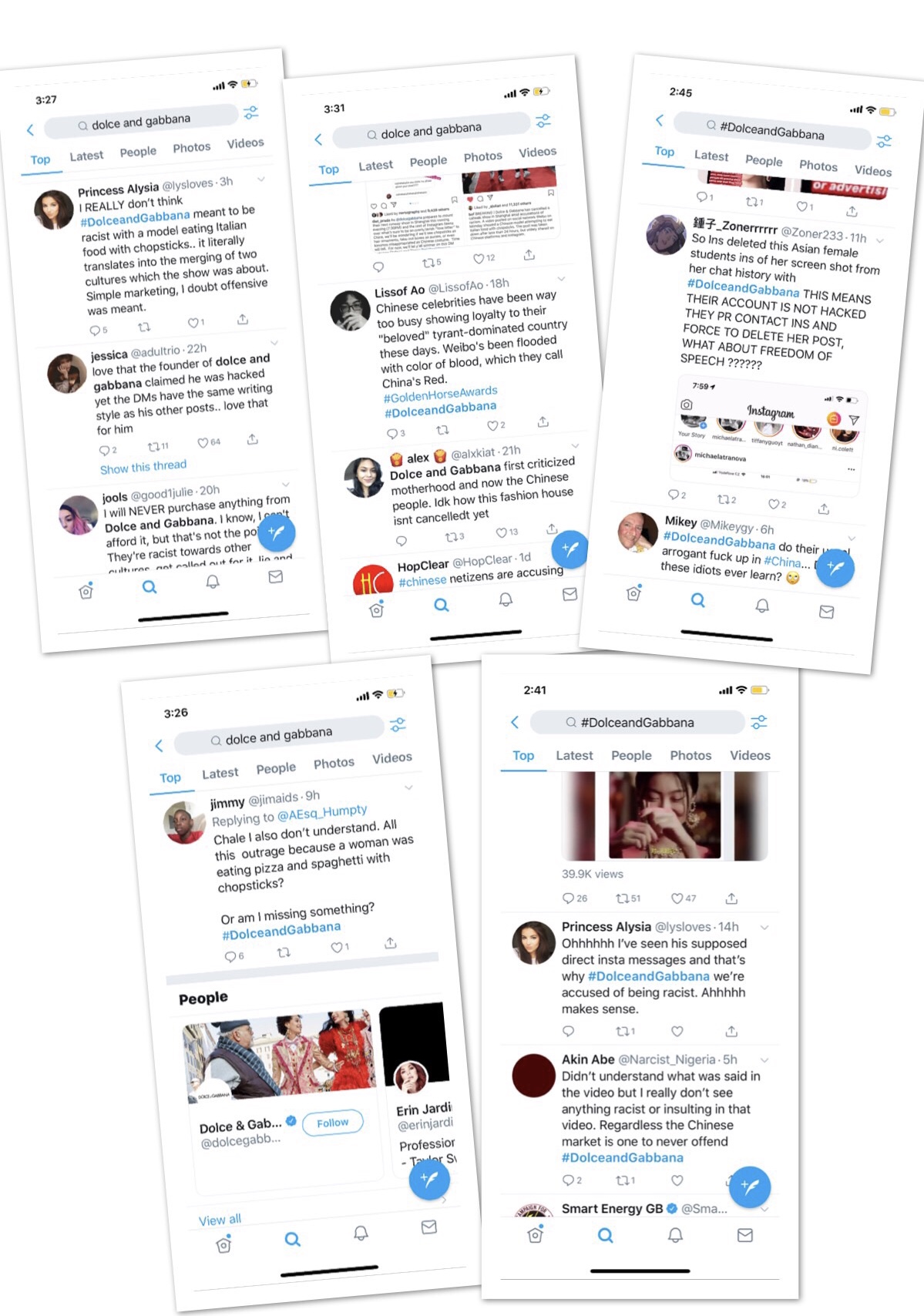 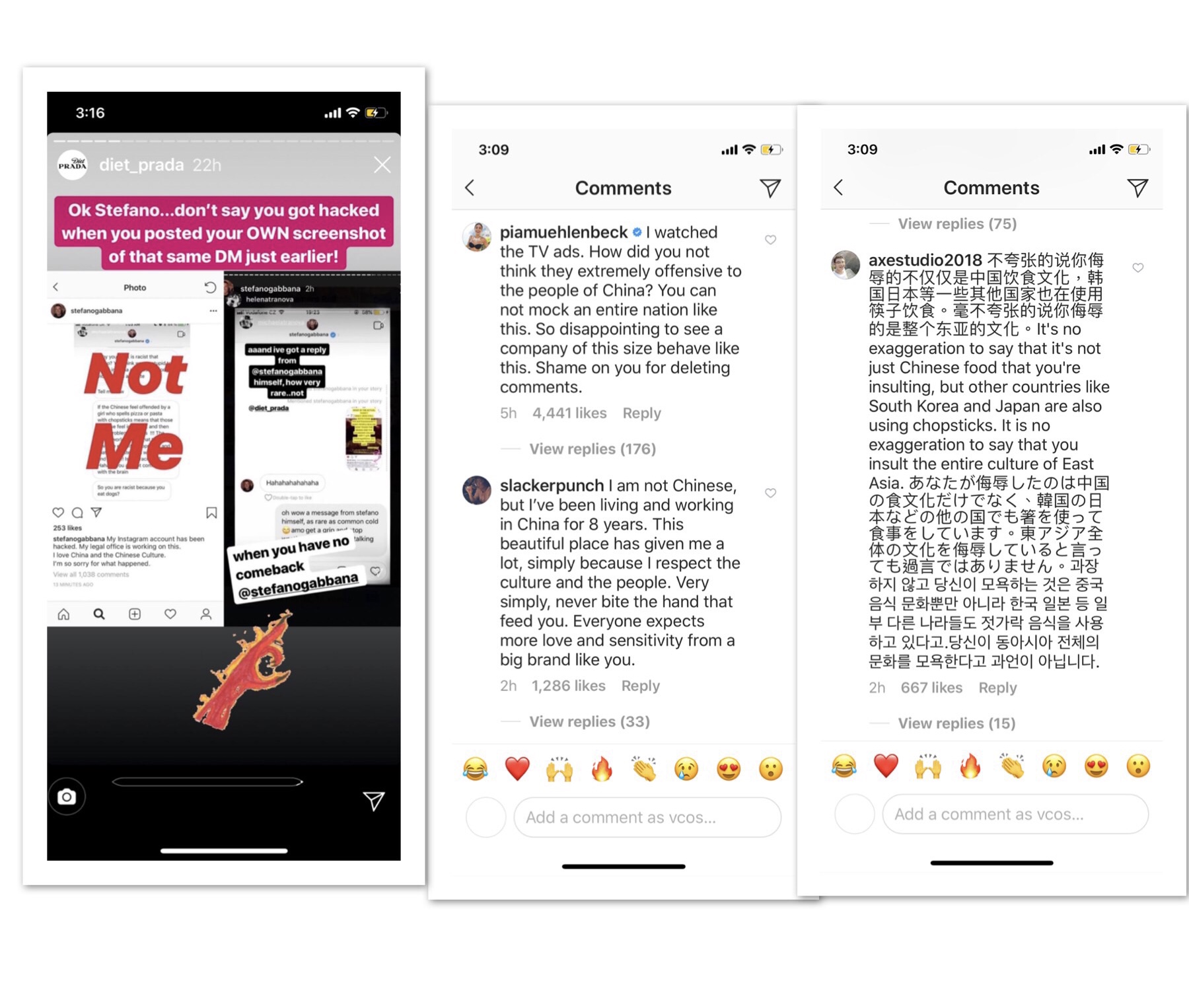 The Washington Post published an article in May titled, Dolce and Gabbana are rich, extravagant and politically incorrect You got a problem with that?  In China’s case: The answer is yes. It may seem the high fashion brand can’t lure one of the biggest markets with billions of people anymore.