With a recent sold out six night run in London, celebrity guests, hugs from Netflix’s CEO Ted Sarandos and Jay Z, it’s hard to believe the controversial comedian Dave Chappelle could be cancelled.

“You embody Black excellence, how great we can be.” On Saturday night, the American comedian praised and inducted the undisputed hip hop King of New York, Jay-Z into the Rock and Roll Hall of Fame.

He began the speech with a tease of an apology in relation to the recent bad taste transgender jokes to which he shut down seconds later with a: “..Nah, I’m just f*cking with y’all.” I think it’s safe to say Chappelle has become accustomed to backlash from all his years as a comedian. It’s to the point he could care less and this recent scandal is just one of many he’s had and probably not his last.

I don’t tend to watch Chappelle’s stand up but I did tune in to his Netflix special “The Closer”, which split the public on whether his set was more harmful than something that could be brushed off as “just a joke.”

As someone who agrees with the idea of free speech in comedy, even I found a few jokes rather sticky. I think there’s a fine line between offensive jokes and off-limit comedy. During a time where society is more politically conscious, comedians may need to progress their content.

Having said that, it’s unfair to pretend Dave Chappelle’s the only comedian pushing the boundaries. Ricky Gervais and Jimmy Carr have both made careers from offensive comedy. This still doesn’t stop Gervais from hosting another Golden Globes or Carr from hosting another TV show.

It makes you wonder if there’s a degree to the levels of acceptable discrimination in comedy: What’s the acceptable line? Is the line different for different skin tones? 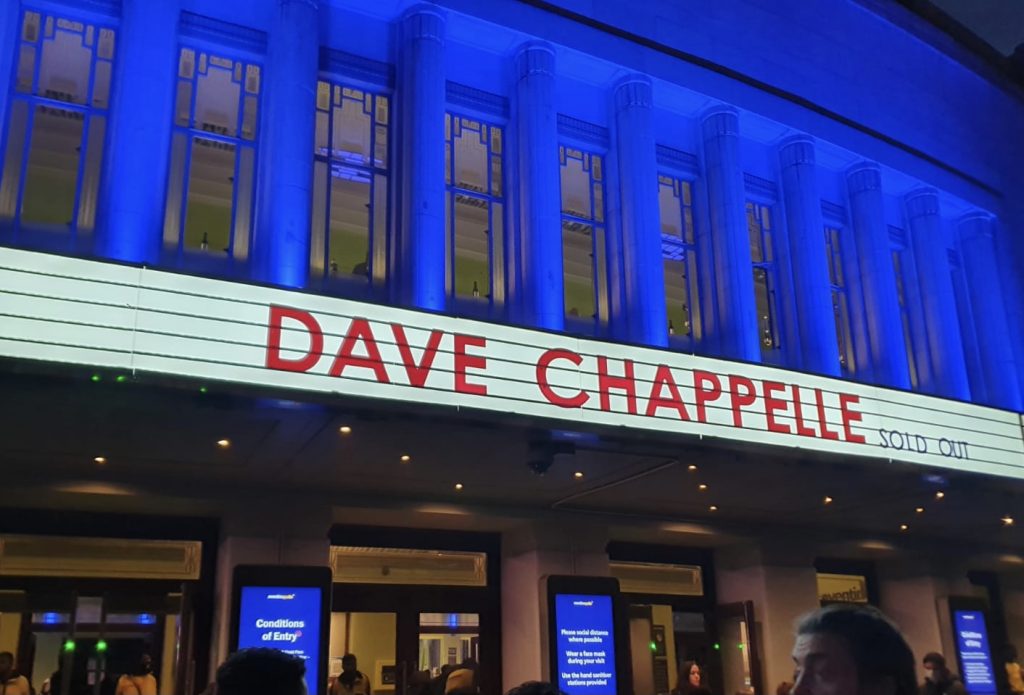 What a week it’s been with these two in London and we get to do it all again next week. Salute to Dave Chappelle & Jeff Ross. pic.twitter.com/WxmHcQIWZP

For his London Apollo shows, Chappelle had comedians Kojo Anim and Jeff Ross open the show.

I attended my first Dave Chappelle show on the 21st of October in which both Stormzy and Jason Momoa also made a fleeting appearance at the close. Although it didn’t appear that any protestors were on sight during that night, it was reported they did show up for a few of his other shows that week.

Of course, he made a point to address the controversy during the gig, stating that he respects the LGBTQ community and that he believes in trans people and their right to live how they want.

At the end of his set, he even encouraged people to hug those in the trans community. However, for someone who doesn’t have a problem with the LGBTQ community, he sure does use them as his punch line for quite a lot of his stand up. So maybe he needs new content or maybe he’s just a troll who enjoys the rise he gets out of people. After all, bad publicity is still publicity.

There was also this whole racial component to his set in which made it seem his problem is more with the fact he feels people value LGBTQ rights more than black rights. “What do you call a black trans person… a n***er,” pointing out that a black trans person’s experience is worse than the white trans community.

A very truthful point, but I think he needs to remember that there’s this huge community of black people that are also part of the LGBTQ community and some of his distasteful jokes are not doing them any additional favours.

The reaction from the crowd was quite transparent. They loved it. Fans sitting in front of me were laughing before anything funny was said. (Though they seemed a little drunk). Chappelle also seemed to be just as relaxed, smoking cigarettes as his bodyguards brought him drinks on stage and even introduced his security team to the audience.

By the end of the night, everyone was on their feet giving the comic a standing ovation.

There was a strict no mobile phone policy at the show and two people were immediately expelled by security for trying to capture a photo of the comedian on stage.

Despite the fact that fans couldn’t snap a photo, it didn’t stop them from interacting with him. Many people approached the stage at the end of the show to receive a handshake and praise the stand-up.

However, a few people I spoke to as I left said to have found the night a little disappointing, claiming to prefer his older work. With multiple Emmys, Grammys and million-dollar contracts, clearly controversial jokes are having no effect on his career. It seems he’s secured himself a loyal audience over his many years in the industry.

Dave Chappelle is becoming a polarizing figure in some quarters, but how much of this is his own doing and how much can be attributed to the momentum to have him cancelled (based on what appears to be a vocal minority which in itself is so loud).