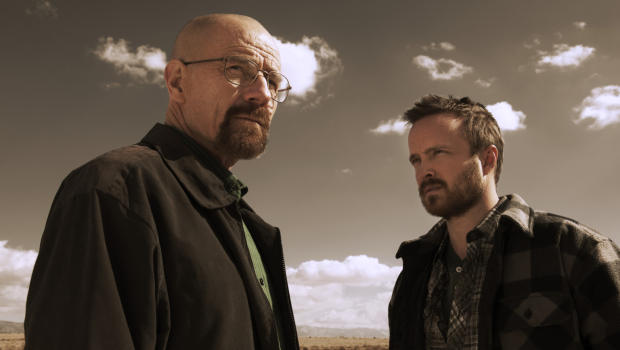 With the news of a Breaking Bad movie coming out, we went to Twitter to consult with our readers on a very important topic.

Are we tired of reboots, sequels and prequels yet? Even if it’s as compelling a story as Breaking Bad was? How much greatness can we take before it gets boring? How does a talented producer like Vince Gilligan know when it’s time to move on to another project?

With a new Breaking Bad movie coming out, Are we sick of reboots? #Greenbrier #breakingbadmovie

Aaron Paul has been confirmed to come back as Jesse Pinkman in the newest movie spin-off to a critically acclaimed TV drama – Breaking Bad. The original series followed a story of a high school teacher Walter White (Bryan Cranston), who upon getting a fatal diagnosis turns towards the meth manufacturing business. This will be the second follow-up story to the Emmy winning show, after the well-received prequel series Better Call Saul on Netflix.

SlashFilm broke the news on Wednesday, claiming that the shows’ executive producer, Vince Gilligan, is working on a new project that he will write, direct and produce. The movie under a working title Greenbrier is said to follow a story of a kidnapped man and his quest for freedom. For any true Breaking Bad fan this clearly means that we will get to see what happens to Jesse Pinkman after the shows’ finale.

The Albuquerque Journal has confirmed that the shooting is set to begin soon and that the casting for New Mexico local actors and extras is ongoing. We can expect the executive producers of both shows, Melissa Bernstein and Mark Johnson to work on the upcoming movie.

As for the cast, it is still unclear which characters from the Breaking Bad universe will make a comeback. Bryan Cranston, one of the lead actors from original series, went on The Dan Patrick Show to say “I have not gotten the script… so there’s a question of whether we’d even see Walter White in this movie. If Vince Gilligan asked me to do it, sure, absolutely. He’s a genius.” According to The Hollywood Reporter it is still unclear whether the movie will appear in theatres or TV.

Ever since the news broke out there’s been a growing concern among the fans of the show online. Many of them are worried that Vince Gilligan might repeat the mistakes of Sex and The City 2 creators. Bryan Cranston addressed these concerned on Wednesday by saying: “It’s a great story and there’s a lot of people who felt they wanted to see some kind of completion to some of these storylines that were left open. This idea, from what I’m told, gets into at least a couple of the characters who were not completed as far as their journey.”

Vince Gilligan seems to be in disagreement with our readership on whether the story he began with Breaking Bad has yet to be finished. We can only hope that, with this new format, he can tell the new chapter in ways we haven’t seen before. Who knows, maybe there is still more to the story than we initially thought?