The Met Police review of stop and search has brought into focus the Black Lives Matter protests this year. New data has shown that Afro-Caribbean’s are four times more likely to be stopped and searched in comparison to their white counterparts.

With Black History Month over, let’s take a look back at how far the #BlackLivesMatter movement has come since the start of 2020.

It all started with a video of the murder of Ahmaud Arbery, a 25 year-old unarmed black man, who was killed whilst jogging.

The video, which was taken by a man following Arbery, shows him jogging before approaching a stationary vehicle. Whilst attempting to avoid the vehicle, Arbery gets into an altercation with a man carrying a shotgun; after three shots were fired, Arbery is then seen lying on the ground.

Then came the murder of George Floyd in Minneapolis, another unarmed black man whose life was taken whilst in police custody. On May 25th, when Floyd attempted to purchase cigarettes with a $20 note at a grocery store, which an employee thought was fake, police were called.

Floyd was arrested and a struggle began following officers’ attempt to put him in the police vehicle. According to the BBC, Floyd, “stiffened up, fell to the ground, and told the officers he was claustrophobic”. 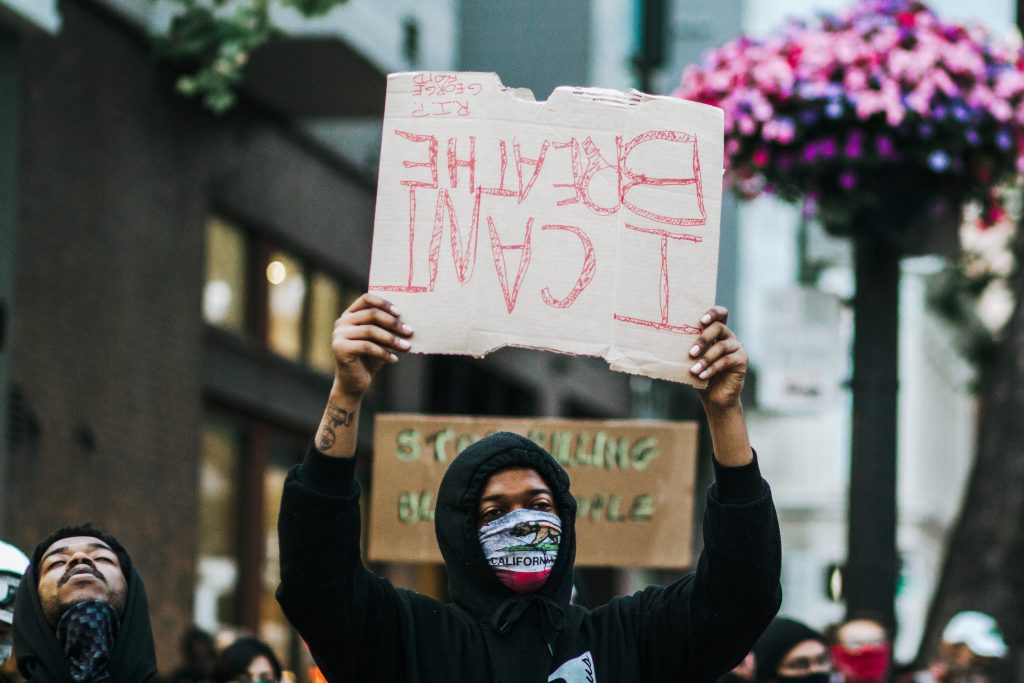 “I can’t breathe”, a phrase now synonymous with the #BLM movement after the death of Eric Garner in 2014 and George Floyd in 2020. Photo by Gabe Pierce on Unsplash

Whilst on the ground, Derek Chauvin, one of the officers, positioned his knee on George Floyd’s neck; despite Floyd repeatedly stating that he could not breathe, Chauvin held it there for eight minutes and 46 seconds.

Breonna Taylor, 26, was killed whilst asleep in her home. Officers arrived at Taylor’s Louisville apartment to conduct a search warrant related to a drugs case.

Mistaking them to be burglars, Taylor’s boyfriend called 911 and discharged his firearm, which he was licensed to carry. In retaliation the officers shot back, killing Taylor in the process. Breonna Taylor was shot eight times – she was unarmed.

Despite not losing her life at the hands of police, Belly Mujinga’s death came after she contracted Covid-19 after being spat at by a customer, whilst working at Victoria Station. After a 19 day investigation, “the police concluded there was insufficient evidence to charge anyone with a crime”, the BBC reports.

In June 2019, Shukri Abdi’s body was found in the River Irwell in Greater Manchester. Despite over a year passing since Abdi’s death, during the Black Lives Matter protest, people took to the streets of London calling for justice for Abdi, as well as Floyd and Mujinga.

While some protests were happening in front of the US Embassy, as well as other notable places in London, protests taking place outside of London directed attention to another big issue – the honouring of Britain’s colonial past through statues.

The statue of Edward Colston, a merchant who was involved in the Atlantic Slave Trade, was notably pulled to the ground, dragged, and pushed into Bristol harbour.

Whilst George Floyd’s death can be argued to have set a precedent for reform in a justice system where African Americans are unfairly discriminated against, there is still work to be done.

In the UK, a year-long pilot scheme has been introduced as part of an Action Plan to help improve black people’s trust in the Metropolitan Police, which will see the force aiming to recruit 40% more black, Asian and minority ethnicities starting in 2022.

Sian Berry, co-leader of the Green Party says, “it’s right that the Mayor has recognised the disproportionate way the Met treats black Londoners in every way, and the hurt this causes in communities. A badly handled, unfair stop and search isn’t just a statistic on a policing database, it’s a person dehumanised”.

Photo by: Omega Kamombo via Canva