Over the past few weeks the online therapy company BetterHelp, has come under fire for their confusing terms of service and their hiring methods. YouTubers were nobly promoting their service to their young fans with little to no knowledge about what they were advertising.

The company has acknowledged that their online service does not replace face-to-face therapy sessions. Their service cannot guarantee the skills, degrees, credentials or qualifications of the councillors. The clients were encouraged to confirm the credentials of whom they were speaking to.

Alon Matas, founder of BetterHelp, has denied the claims. In an interview with Polygon he stated that the company has a team of 12 people who go through scanned documents sent by the therapists and verify their authenticity. The applications to become an online therapist for the site is fully completed online, with no hardcopy documents needed. Before, the change in terms of service section 13 confirmed that BetterHelp could not guarantee the validity of their counsellors:

Changes in their Terms of Service October 4,2018 Source: https://www.betterhelp.com/terms/

YouTube influencers such as Philip DeFranco and Boogie2988 have ended their sponsorships with the company due to the confusing terms and conditions the service provides to their users. In a video Boggie made on this issue, he said: “After seeing the Terms of Service, I no longer feel safe promoting it [BetterHelp]”.

There have been a range of complaints by users finding it hard to find the terms of service on the site, prices being unclear, and negligence from councillors. A user shared their experience with the service on Reddit and described how the refund method was untrustworthy and the therapists made her slightly uncomfortable. 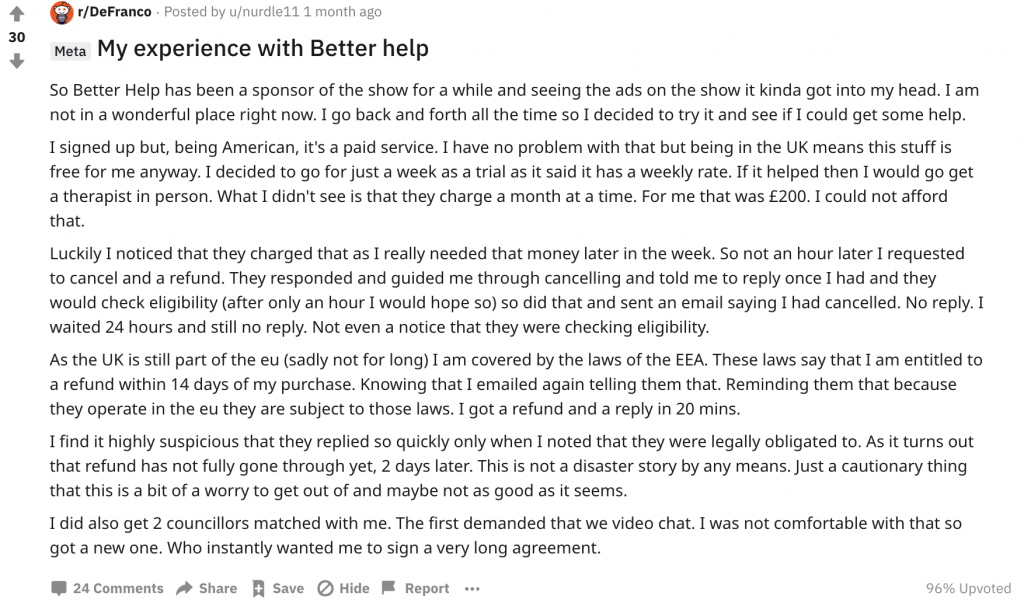 The #betterhelpscam was a portal for people showing their distaste of YouTubers getting money off of their fans who are suffering from mental disorders. Influencers should know exactly what they are promoting before they accept sponsorships, as they may have many young fans with mental disorders watching their videos.

Ever since the scandal broke out, BetterHelp’s legal team has been reforming their terms of service, and will set up a stricter recruiting service. BetterHelp is not the most complete counselling service to deal with serious mental health issues, as they reject most serious issues and recommend users have face-to-face sessions with therapists.

If you are going through mental issues and cannot afford a therapist the NHS provides help lines for you to share your issues.