As the rate of Covid-19 cases increase and society’s fear of the virus decreases, the wildlife of London has been given the shorter end of the stick and bear the brunt of the second lockdown’s unintended consequences.

With everyone stuck at home, people have braved going out in the day to keep up with their physical fitness more in this quarantine than in the first. The parks have seen a surplus of visitors which, to say the least, is a stark contrast from when pelicans were roving around Central and a hoard of deer became East London’s new tenants… Flashback to May when Londoners properly hid indoors as if the zombie apocalypse had finally transpired.

Richmond Park, located in west Greater London and capping at around three and a half square miles, has been one such victim of heavy human traffic. As the largest of London’s Royal Parks, Richmond Park is of international and national prestige for wildlife conservation while it nurtures 630 Red and Fallow deer dating all the way back to 1637. 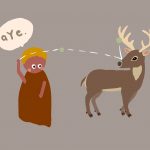 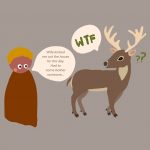 Handing out over 1,000 citations since July, the Royal Parks Police have insisted that visitors stand at least 50 metres from the native wildlife and do not feed them under any circumstances. While a good many do adhere respectfully to the rules, a small but impactful few find a way to ruin it for others.

@theroyalparks my friend took these pics on a long zoom lens today.
People feeding the deer from their hands, then throwing food at the deer when the deer decided they’d had enough.
So horrible to endanger the children in this way. pic.twitter.com/y2xAVYLD6H

Wedding dress designer Charlotte Wilden took to Twitter last week sharing her friend’s zoom-lens photos of a man feeding the deer. Allegedly, after the deer had had enough, he threw the food at it causing it to become hostile. Wilden commented about the park-goers nearby: “So horrible to endanger the children in this way.”

Richmond Park remains crowded even though new guidelines for social distancing were issued 5 November. The Royal Parks Police has had its hands full protecting London’s native creatures while simultaneously trying to guard park visitors and keep the virus at bay, reminding people: “Feeding deer is the opposite of kind.”