It’s been a pretty tough week here in the UK with confusion and panic as London and other parts of the country prepare for a Tier 2 lockdown. But amid all the chaos of Covid, a few crazy things are happening around the UK that are bound to cheer you up:

1. Sanitary towel as a face mask?

A visit to Poundland did not quite go to plan for a woman in Greater Manchester who forgot her face mask and had to quickly improvise by sticking a sanitary towel to her mouth. 30-year-old Rachel Taylor and her friend were about to go into their local Poundland store when she realised, she couldn’t find her face mask. With some quick thinking, Taylor slapped on a sanitary towel and used her sunglasses to hold them into place. Though there’s no proof it was efficient in stopping the spread of Covid, the sani pad allowed her access into the store. 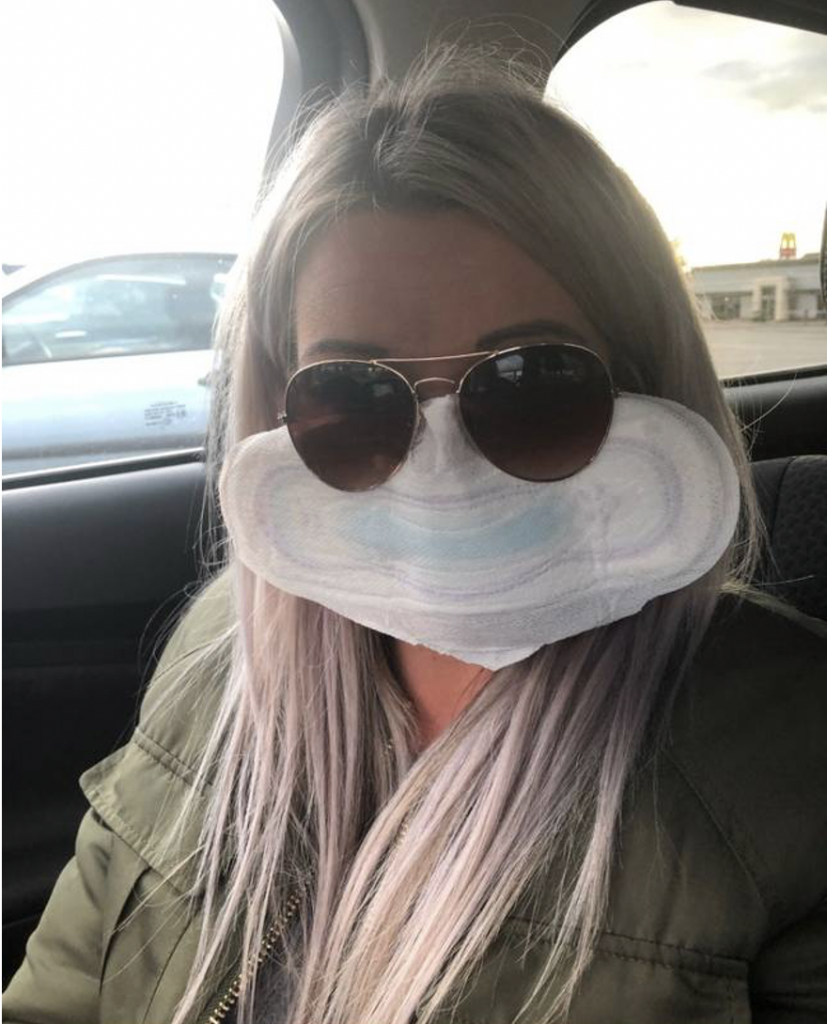 At the beginning of the pandemic, supermarket shelves were running dry of almost anything you can think of as desperate shoppers were on the hunt to stockpile on all the essentials whether it was toilet roll, tea or pasta. Unfortunately, however, there was one item that wasn’t really drawing people’s attention, Mexican lager Corona beer was in full stock in an East London supermarket whilst other branded beers were selling out. Could it be because the name bears an unlucky resemblance to the virus behind Covid-19? We’ll never know… 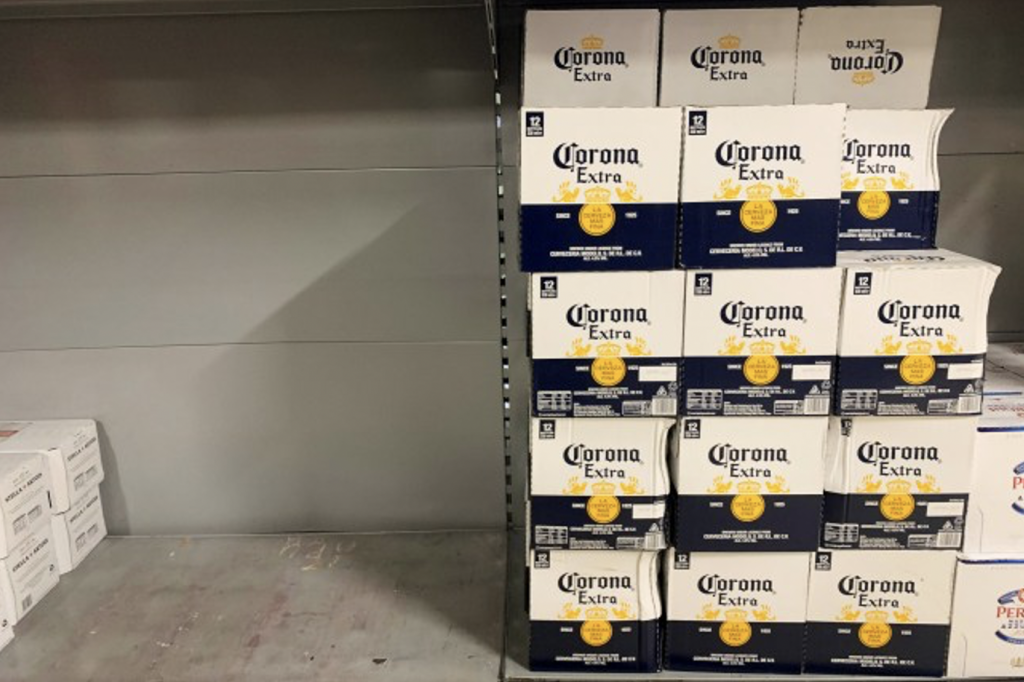 Who are some of the weirdest neighbours you’ve had to put up with? I can guarantee you; nothing beats these two teddy bears in Stockport. Ed and Ted, also known as the Moor Bears, entertain their neighbours with scenes of them mowing the lawn, live music, magic shows and spa days. They even have their own Facebook and Instagram pages to help people push on and keep up with their antics during the coronavirus pandemic. Their neighbours and people on social media have been very supportive of the bears’ activities, one user even commenting “looking forward to a baby Ed & Ted.” 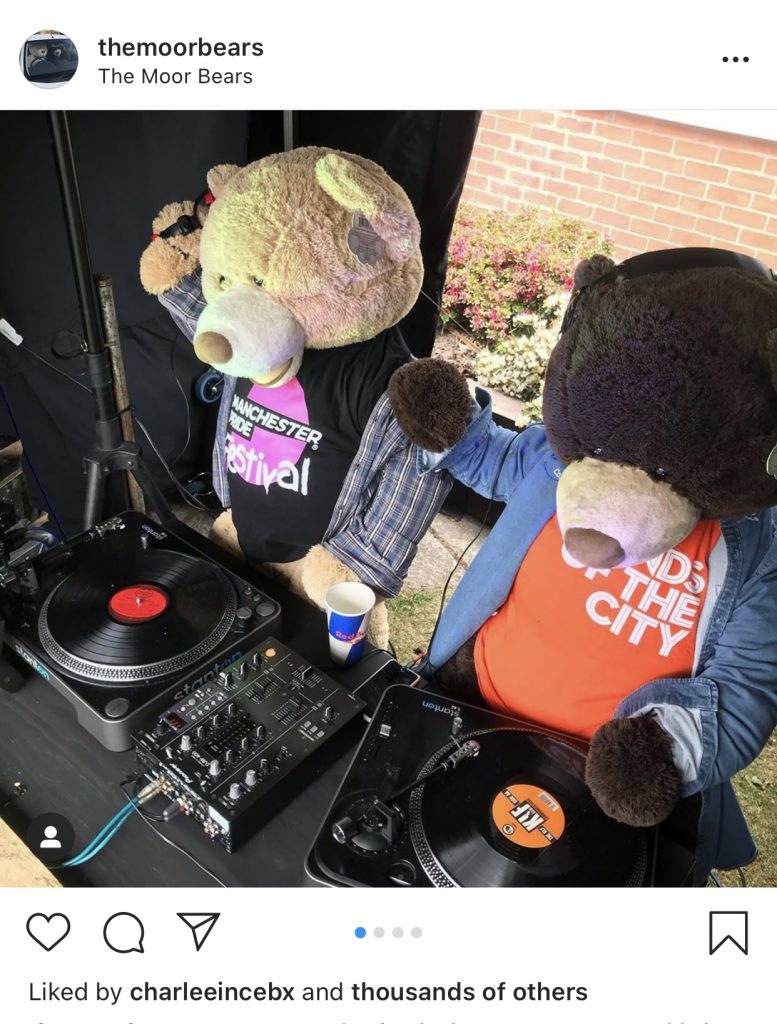 4. The mailman and his hilarious costumes

Jon Matson, a mailman from Boldon, began noticing his neighbours getting anxious over Covid and self-isolation, so he decided to bring some joy and laughter into their lives through their windows. He came up with the idea to dress up in silly costumes to entertain the people quarantining on his route. Some of his costumes include a cheerleader, a knight, Waldo and even Cleopatra. His daily costumes have received positive responses as families gather by their windows each day to see what he’s wearing. 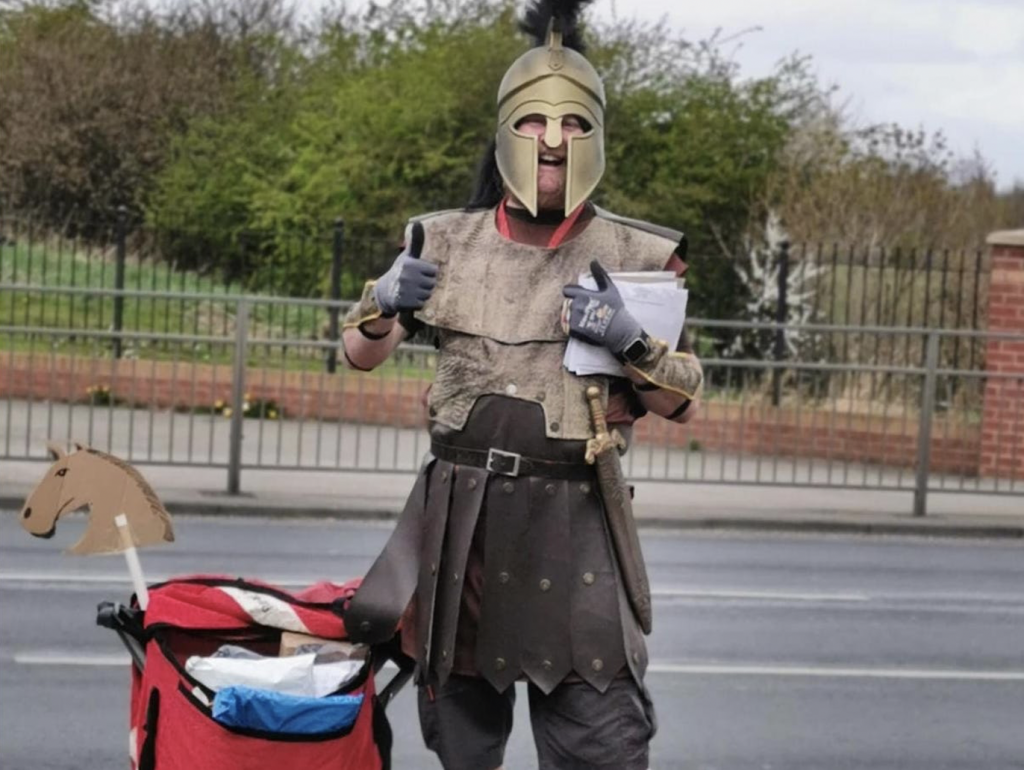 Mailman Jon Matson dressed as a knight on his route | Image credit: Insider

34-year-old Sven Kirby from Leeds had wanted to keep geese for a few years, so when lockdown finally hit, he did some research and found his nearest breeder and decided to adopt his feathered friends, Norbert and Beep Beep. People regularly spot him walking the birds around at the park on Friday evenings and weekends. But recently, the unusual trio has decided to take their socialising a step further into the pubs. Unfortunately, the geese aren’t potty trained, so when they do visit the pub, they wear special nappies indoors. 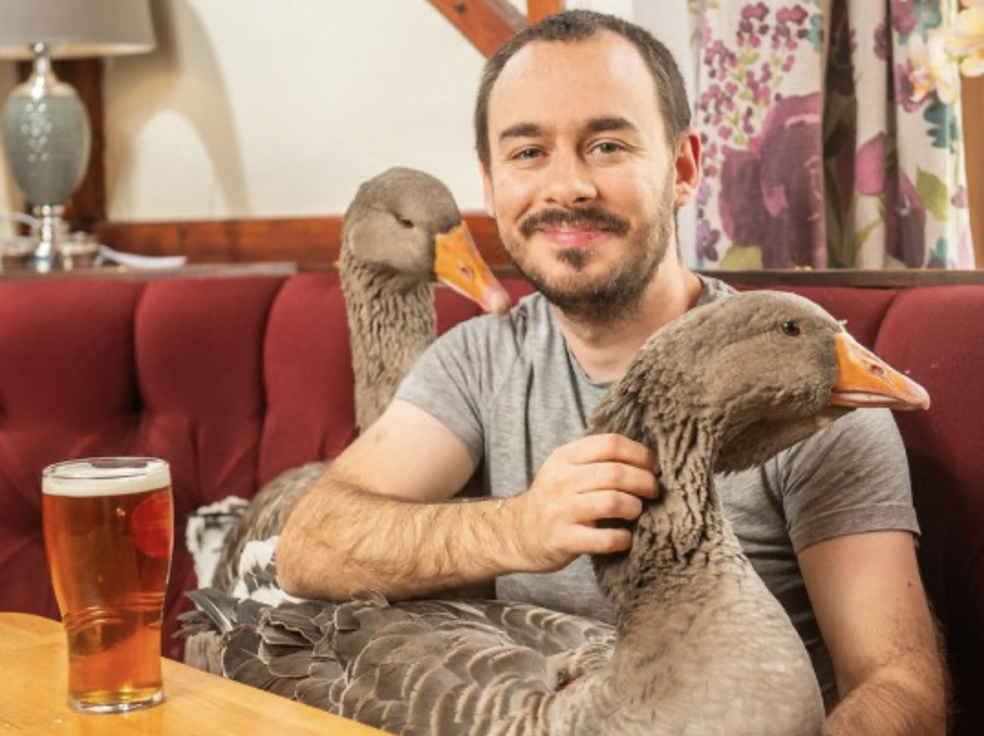 There’s not much to say about this one, besides that people are getting way too creative with their masks. This man decided to ride the tube with what appeared to be a huge plastic box over his head. Though he definitely did his part in keeping safe on public transport, his journey may have been chaos had it been the rush hour and a packed London underground. 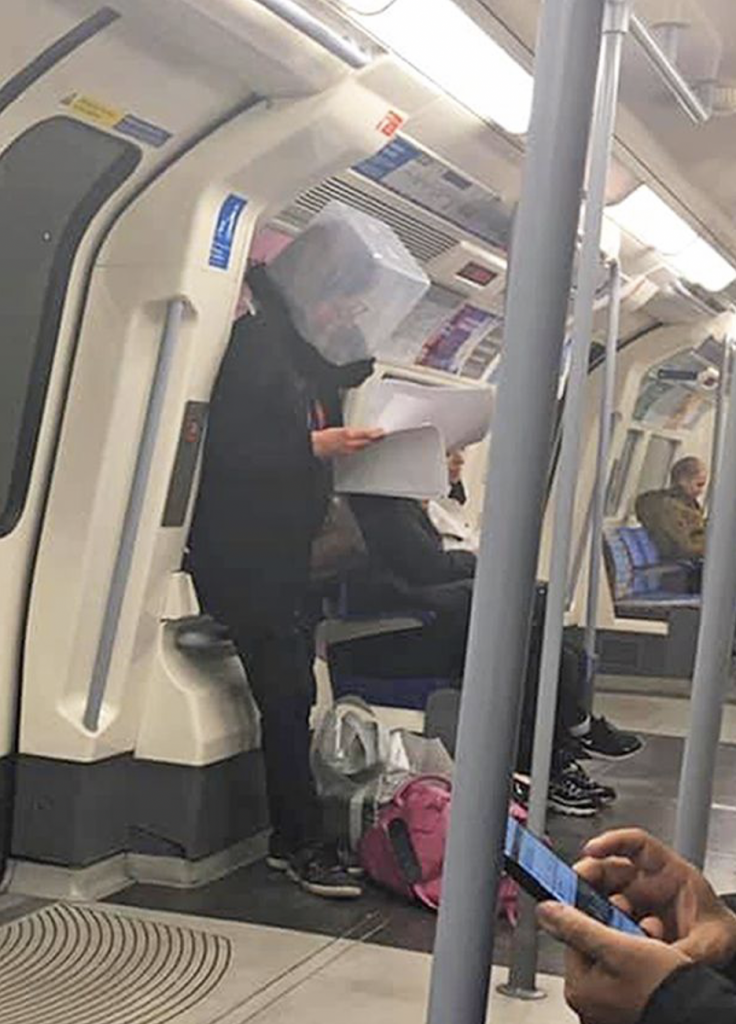 This man definitely got way too creative by using a plastic box as a mask | Image credit: Sabina Ana/PA wire

Although it’s been crazy during the pandemic over here in the UK, there have been some crazy lockdown stories across the world too. Over in Pennsylvania, Rick Kalinowski has started a popular quarantine trend of building miniature picnic tables for squirrels. After losing his job because of Covid, Kalinowski got the idea while watching squirrels in his backyard. Using scraps of wood, he created the mini picnic table and posted pictures all over social media which gained a lot of attention and inspired others to follow in his footsteps, like Brad from Texas who also gave it a go. 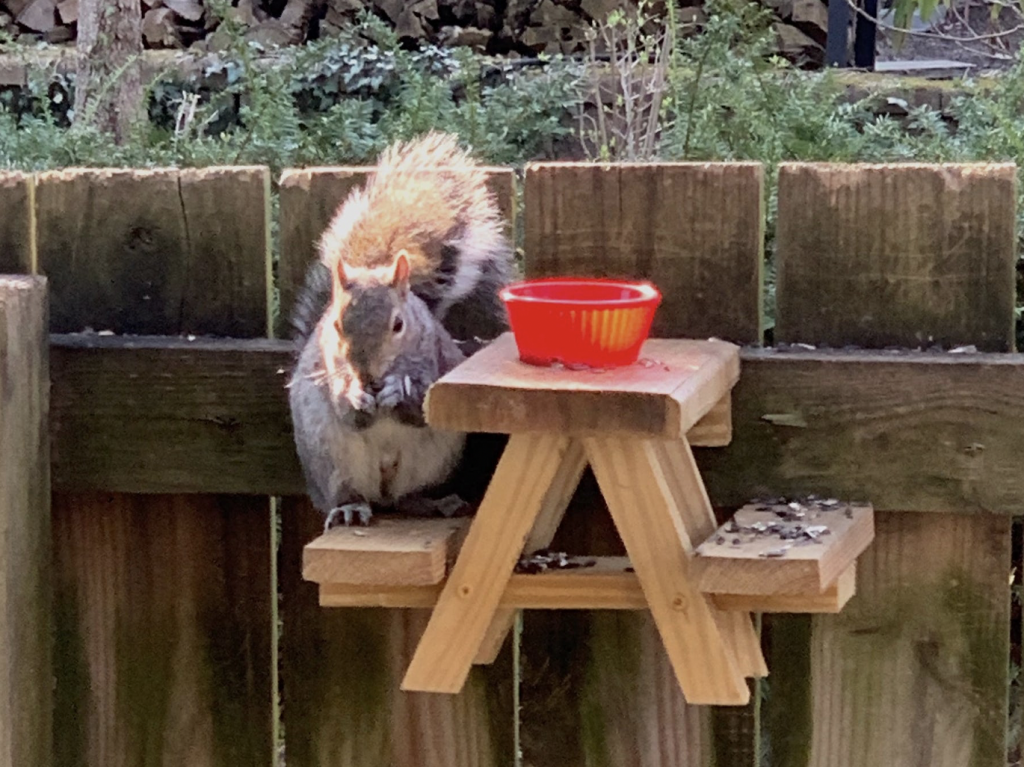 Rick Kalinowski’s picnic bench is being used by a squirrel | Image credit: Insider 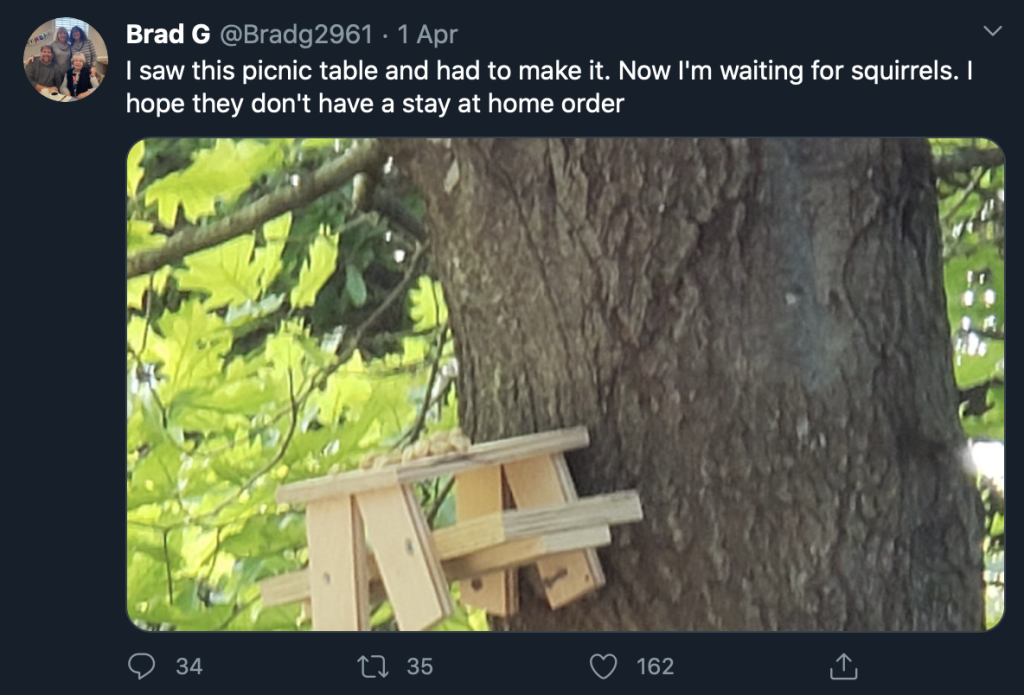 Brad was one of the many people who followed the quarantine trend | Image: Twitter

Has lockdown had anyone acting strange in your local area? If so, send us some of your crazy pictures of what people have been getting up to!