Every football fan in this country has an opinion on the international side. Most people think it’s a dull waste of time and that we will never win anything. I’m in the small minority of fans who love it. I’m a believer.

Granted, the international break isn’t the most exciting week in anyone’s footballing calendar but when it comes to tournament time, there aren’t many things better.

Tuesday. Game day. An excitement starts to ignite inside me. An excitement that I hadn’t felt since the summer of 2016 as England stepped out onto the pitch to face Iceland in France. I won’t go into details about what I felt after that game but let’s just say that all the excitement had left me, and in that moment, I was certain it wasn’t coming back.

I have a strange relationship with our national team. I don’t want to be as involved in it as I am. I don’t want to love it, but I just can’t help it. Every fibre in my body tells me that I’m just going to be disappointed again but I always come crawling back with that dangerous feeling: hope. 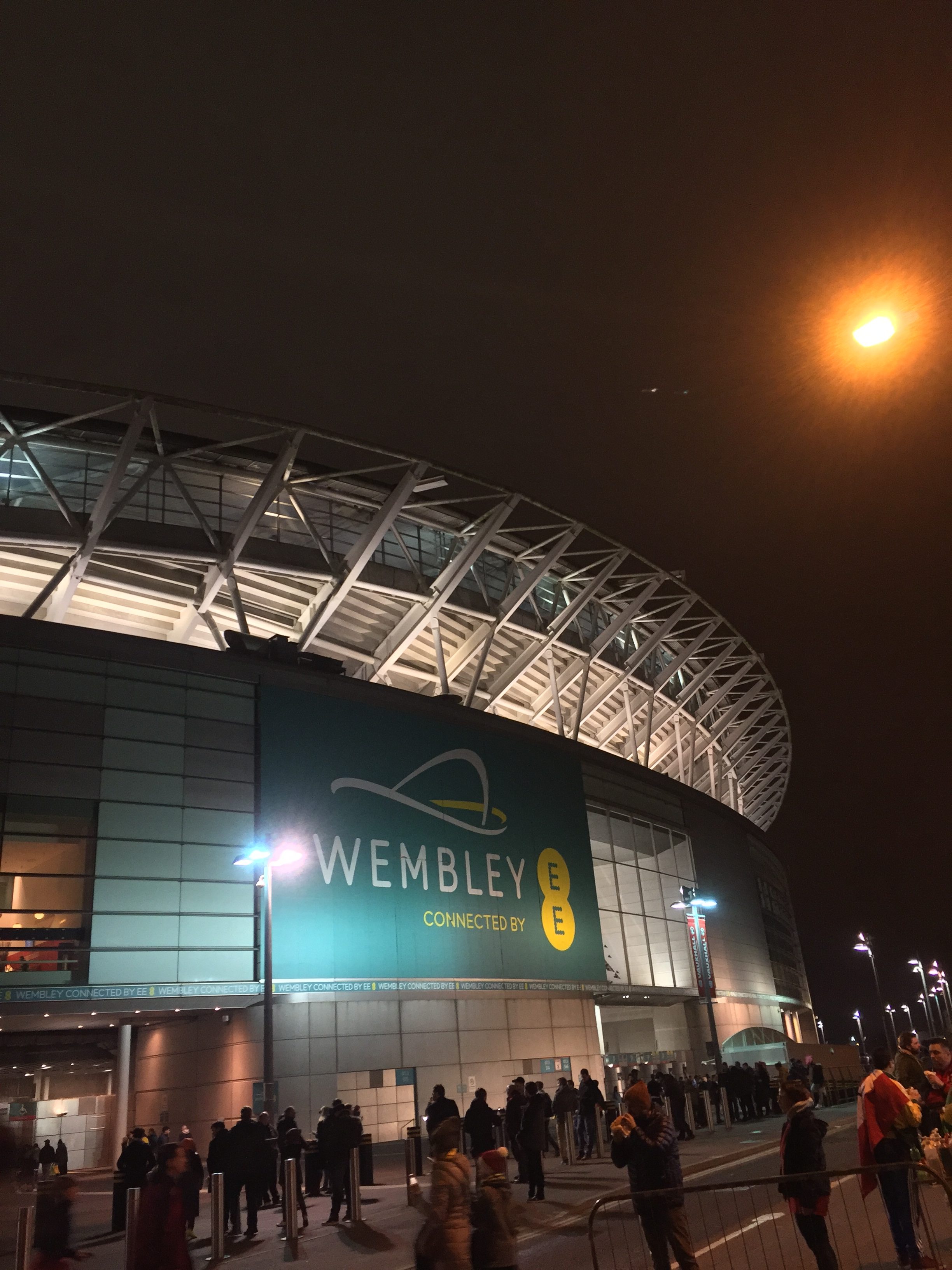 The location for this showcase fixture. Wembley Stadium: under the lights. Photo Kieran Soutter

Walking up to the game from Wembley Central is when the bug begins to take over. Seeing all the England fans clutching their flags all walk towards the ground. This game is just a friendly but any England game means a lot to us fans. It’s an exhibition game, a showcase fixture against one of the best footballing nations in the world. Similar to when the Harlem Globetrotters come to town. Brazil were here and they arrived in numbers.

Wembley Way, usually a familiar contingent of white and red had transformed into a sea of yellow, green and blue; Brazil fans had flooded our ground. At international level this is welcome, fans sitting in the home end, even being allowed to cheer and chant. It creates that carnival atmosphere that you don’t really get at club level. I for one don’t enjoy sitting near opposition fans but at least they can sit there knowing they’re safe which is something club football can’t offer away fans. 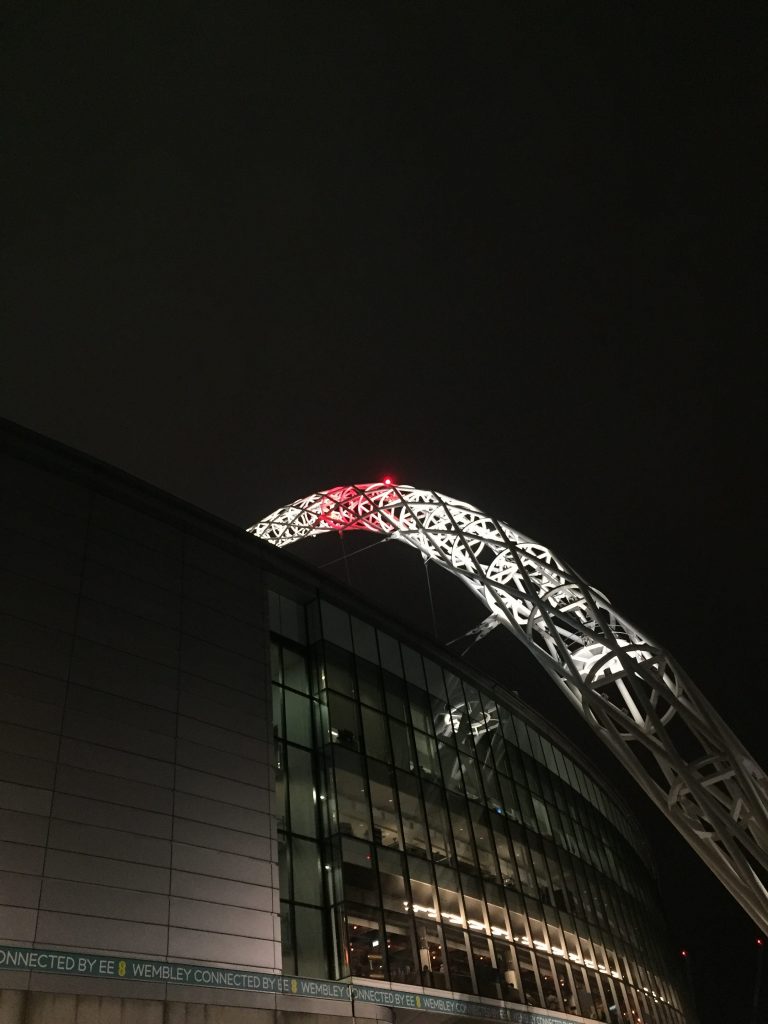 Reuben Pinder, a fellow reporter for Voice of London Sport and I went live on Facebook outside Wembley to discuss some of the talking points of the game. Watch it here.

Finally arriving in my seat I double check my ticket to make sure that I hadn’t accidentally ended up in the away end as Brazil fans surround me. I glance around Wembley and see pockets of yellow throughout the home end. One thing became abundantly clear to me at that moment, Brazil absolutely loves football.

The teams are being read out there is the customary cheer for every player. This is until “Number 10: Neymar Jr” is called. The away end erupts, the pockets of yellow leap out their seats, it’s carnage. This type of love and support for Neymar continues throughout the 90 minutes. Every time he gets on the ball there is a huge cheer, they all know that he was the one to create something from nothing and therefore being excited every time gets the ball is more of an innate feeling than a choice.

As always, England aren’t offering their fans much to shout and cheer about. Some great runs from Rashford and Vardy get people up off their seats but being pinned back into our own half for the majority of the game is never going to be exciting.

The Brazil fans are chanting and bouncing for the duration of the game, even during half time they are still creating an atmosphere. One particular England fan, clearly jealous of this high that Brazil fans are riding, decided to light a joint in the stands. A good metaphor for how this game was going, anything to get through it, right?

It is at round the 65th minute mark when the boredom really starts to take hold of the stands. Paper airplanes flying left right and centre. One plane flew right towards the Brazil goal, landing a few feet from Allison. This is one of the few things that got the home crowd up and cheering. That paper plane got closer than England had come to his goal at this point in the game, however. 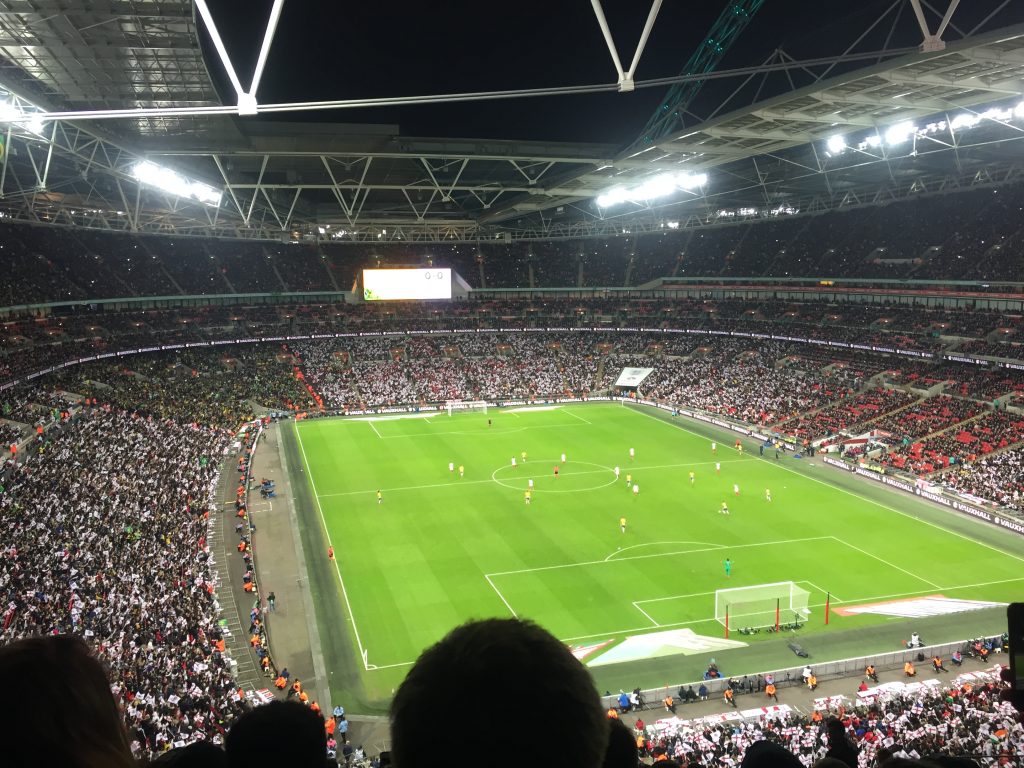 Moments before a paper airplane almost hit the back of the Brazil net. Photo: Kieran Soutter

Southgate, sticking to his word, has brought on Dominic Solanke and Tammy Abraham for Vardy and Rashford. It’s time to see what these young players can do at the highest level.

The crowd are impressed with Solanke. Making dynamic runs and battling with some of Brazil’s ‘big boys’. He definitely won the heart of a man sat right behind me, who would do a fantastic job as a Sean Dyche impersonator, and could not stop singing his praises every time he got the ball.

But the stand out player for England has to be Joe Gomez. Solid performances from Eric Dier, Jamie Vardy and Marcus Rashford shouldn’t go unnoticed but Joe Gomez is having the game of his life. Hardly misplacing a pass, cleaning up when Brazil go through on goal and one strong slide tackle on Casemiro gets the England fans up and cheering again.

The ref blows his whistle and for the second time at Wembley during this international break, it ends 0-0. There are some positives to take from this draw; the young players and their potential for England and how our defence has been solid throughout games so far. Not conceding to the current world champions and Brazil is a feat in its own, especially when you look at both of those teams’ attacking options.

It’s clear to see the differing attitudes towards the England team when at Wembley. But looking at the team we have now and some of the football that we have been playing, I urge everyone to just re-think their stance on the international team. Try and dig deep and find that belief, that hope that one day, in the near future, England will do what no one thinks they can and bring football home.