We say Feminism is still progressing – but it’s time to question, is it? The Voice of London has had a chance to talk to Dr.Emily Falconer, the executive committee member of the Feminist for Women’s Studies Association (FWSA) for the U.K and Ireland to discuss the harassment status quo on the London Underground. And, we were able to hear her personal ‘combat’ with the harasser. To find out more, listen to the podcast below or click here.

“I was late. Late for my job. So I was running towards the station. I was carrying my laptop, wearing a cross-bag, hurrying… It was a bit stressing, yes. But,  It all seemed fine.

Then, I saw a man who was walking up the stairs while I was going down. When we passed by each other, he turned himself around to face me and put his hand over my shoulder, touched my right breast.

I’m still not sure whether he was trying to grab the strap or my boob. I was in sheer confusion, looking at him directly in his eyes. But he just casually walked away, as if nothing’s ‘actually’ happened. And, I had to walk away too.

Because I didn’t want to ruin my day. This is my…I don’t know…I lost count of it. But, at least, this wasn’t the first time.” said, Olivia – named for anonymity.

This is a story of a twentysomething, Asian, woman, who’s considered to be the most ‘vulnerable’ out of the ‘vulnerable’ minorities. “Immediately after that, I was standing at the edge of the platform with a blanked face, blaming at the ‘situation’ for happening.” Olivia shares, how powerless she felt when she stood at the very scene of the harassment. “ I didn’t want to make a fuss”. She closes her dry lips firmly, with a bit of faint sigh – it still pains her. 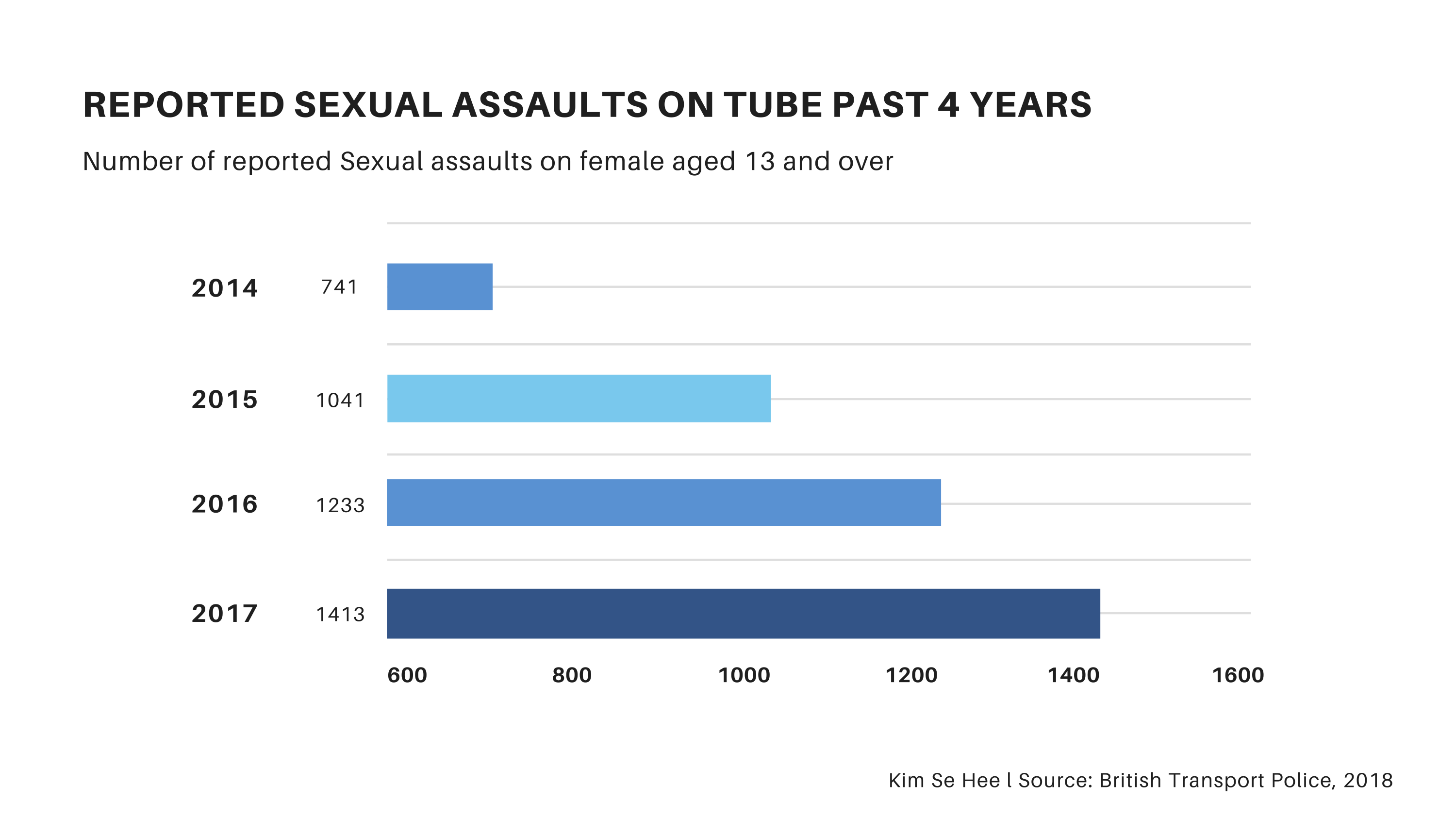 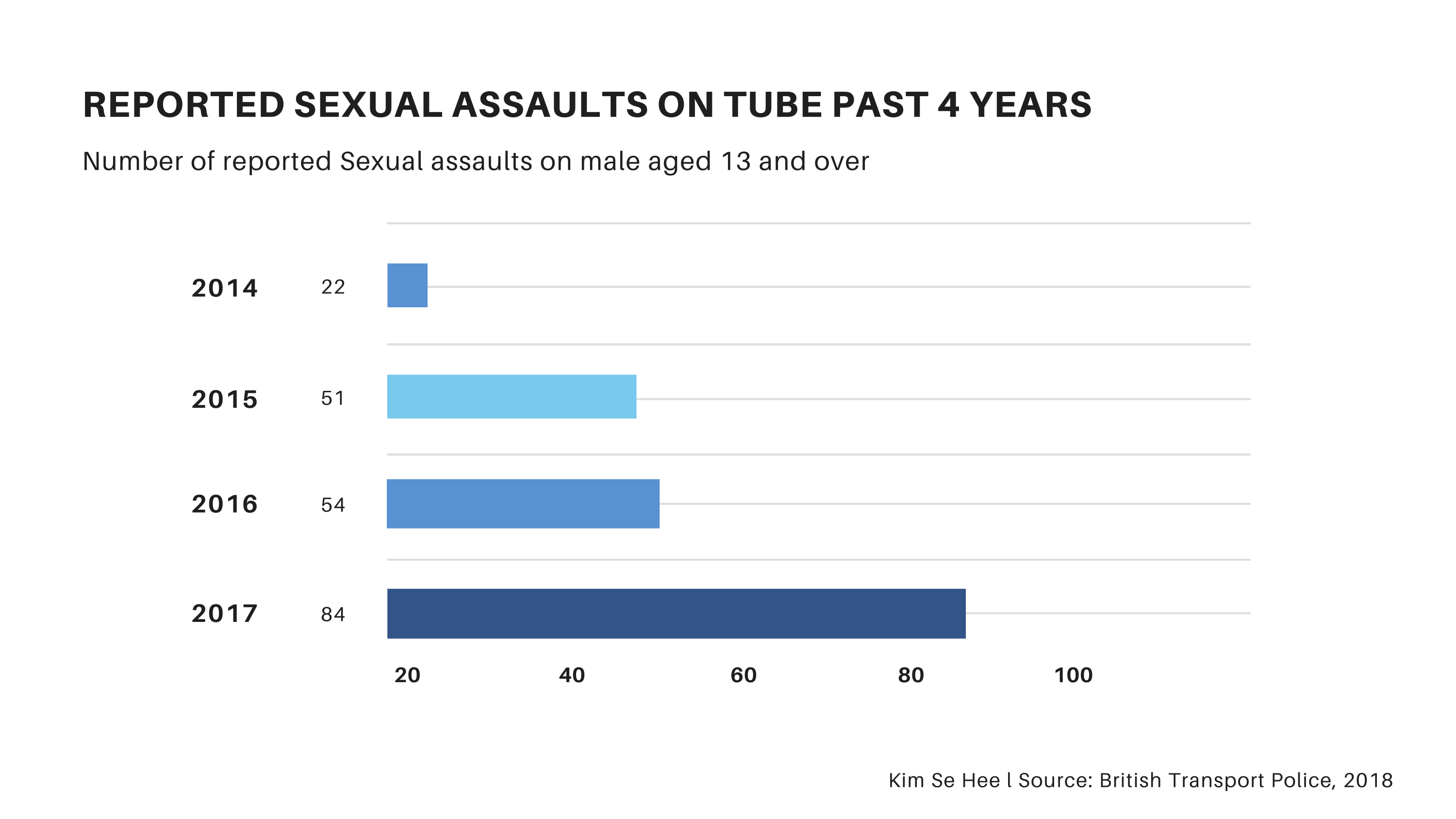 According to the British Transport Police’s (BTP) latest information, the number of reported sexual harassment on women aged 13 and over has soared up by 90.7 per cent since 2014, over the four years. The statistic clearly leaves us all in shock, for how it’s been left out from our attention. In addition to that, the number of sexual harassment on male aged 13 and over has been mildly increasing; yet, the quantity of sexual molestation reports on females and males appears to have an irreducible gap.

Besides BTP’s figures, there are some statistics showing that ‘feminism’ hasn’t actually done much –

The feminism – women demanding equity in social standing under gender-stratified society – has been in public dialogue since Harvey Weinstein has been exposed as a sexual molester in Hollywood. Not to mention Harvey Weinstein’s prior sexual conducts on, countless, film stars and staffs, ordinary people started to see hidden molesters who are breathing near us.

Even though ‘feminism’ urged young women to protect themselves from the looming danger, when it gets to the actual moment, being harassed unexpectedly, “head goes white.” – Olivia describes it as ‘white-out’. Simply put, victims don’t know how to fight back.

“I don’t think I ever learned how to take a shot back at the harasser. All I could think of was, just to walk away from there and not thinking about it.” It comes to question, is it healthy? Is it healthy to bury those feelings in which you remember so vividly? Olivia points out how she is uneducated in combatting such situation.

“I hate how my hatred grows, being drawn into negativity and be hopeless of this social perception. I’m sick of public assaulters and feminism, which doesn’t stop me going through all these. I don’t know how many girls would relate to me, but I had to have a say. We have far more to go.” Olivia points a finger at the society’s fogged vision in social services and leaves a question mark on feminism’s ‘actual’ progress.

Olivia’s not trying to call for pity. By putting her story out there, she believes, her side of the story would help more victims to open up.“Through this experience, it got me thinking, there should be more girls – or, boys – who’ve gone through similar situations like mine and wish to come out.” She then adds, “it’s time to fight back.”

Yet, seemingly, some made a pioneering step in opening up their side of the stories –

I was handed this by policemen at London Bridge this morning – how to report sexual harassment on the tube. Thought it was worth sharing… pic.twitter.com/LYJF2JBUQw

Okay I’m sick of taking the tube. How can a man record me. Another stare at me. Now I’m tired and another is staring at me. The harassment women experience is sickening.

This morning, I witnessed a particularly nasty example of sexual harassment on the tube. I’ve seen this so many times before, but today it really got to me, particularly in the current climate (1/ )

Harassment on the tube is becoming way too common I swear. I don’t get how people can watch this happen and stay silent. I had to walk with some girl and pretend I know her so that an idiot could leave her alone. Why can’t you take no for an answer???