Loving someone that has an addiction is a struggle that is widely known. The fact that it’s not all in their hands nevertheless, doesn’t seem that familiar to the public. We, as a society, tend to think that drug users are in that situation because they want to. They are seen as criminals, as people to avoid, as dangerous individuals, as selfish people who started fooling around with drugs, or just seen as scary folks. But what would happen if we started changing our perception? Would that help?

Let’s see how it worked out in Portugal:

In 1999, 1 in every 100 people were drug addicts. In 2001, Portugal approved a law to decriminalise the personal possession of all drugs. This meant users would be encouraged – not forced – to give up drugs. They created a Commission for the Dissuasion of Drug Addiction, formed by legal, health and social work professionals.

While the same quantity of money is spent fighting against drugs, the criminal department distributes it differently. This is because the targets are only those who sell drugs, rather than the ones who consume drugs. Results are astonishing:

Werther Ramalho completed his masters in Criminal Law in Brazil and also studied in Portugal. He tells us his opinion comparing both countries. “Portugal’s experience inspired a variety of transformations in the legal treatment of users that have taken place across the continent.”

Werther reveals that Portugal has achieved a movement that promotes seeing the issue as a health problem, rather than a crime. This has had a global impact that affected Latin America as well, and Brazil, influenced by Portugal, started to apply this theory in 2006 and made a similar measure in the same direction but Brazil still see it as a criminal offence. What both politics have in common is they haven’t looked at what kind of self harm is tolerable. “For example”, he explains, “Uruguay considered that marijuana is acceptable and they regulated its use. This made Uruguay able to invest much more in public health policies”

The use of drugs in Portugal after 10 years since the law was approved was completely astonishing: 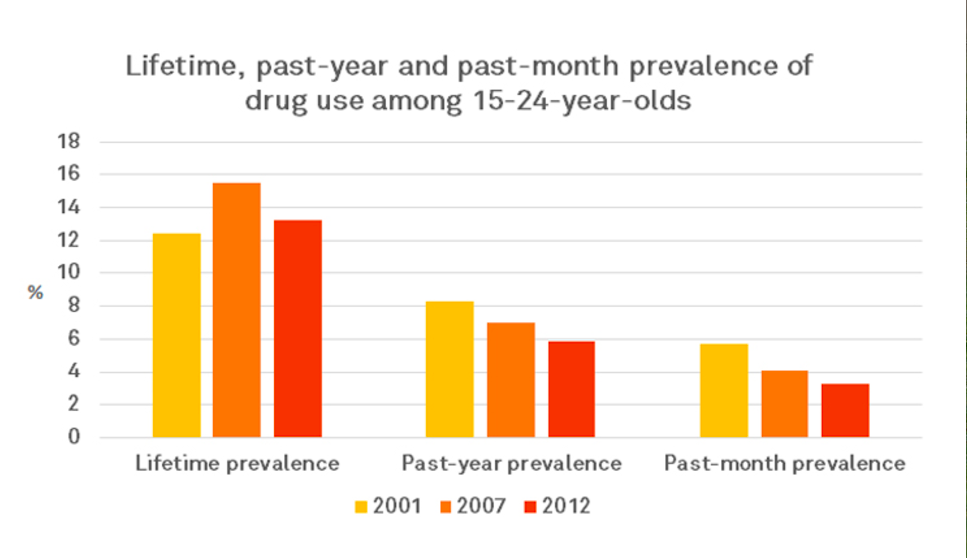 By two out of three measures, adult drug use is now lower than it was in 2001. This gives more credence to the idea that criminalising people is an unnecessary (not to mention inhumane) way of trying to stop them taking drugs.

After further investigation I came across a study done by Robis, Davis and Nuco in 1974. The results altered my views on drug addictions. We are going back to the Vietnam War. Let me explain it.

It’s the summer of 1971 and the military are carrying out urine tests on their soldiers. They are worried as the number of servicemen addicted to heroin reached epidemic proportions: 73% of results came out positive. Both army and government are concerned; they won’t be able to cover the costs of adequate programmes, facilities and medication for the soldiers when they get back to the USA. Six months later, after a follow up and some more urine tests, they find out that of all the drug users in Vietnam, only 10% of them are using drugs at home. How can this be possible? Click here to see the whole study

Well, it is much more simple than what we tend to think. The addiction was there for a reason, which was the war. Soldiers were forced to turn to drugs as a way to escape from the reality of killing people and seeing friends die every day. Once they were back home, their reality was a nice environment in which family, friends and a peaceful way of life surrounded them – so the addiction instantly disappeared. This means that our concept of drug addiction is wrong.

VoL Indepth’s very own case study is Stuart, who has been a drug addict and is now an alcoholic living in North West London. Stuart’s girlfriend committed suicide a few years ago and he has no family left. He is dealing with his own Vietnam War.

Stuart inherited the house that he now lives in. His daily routine is drink a few beers, walk the dog, go to the shop to get dinner and sometimes more alcohol. From what he tells me, he is isolated from society, as he doesn’t have a job or belong anywhere. His front teeth are missing from previous addictions, and even though he looks scary, he has a good heart. His dog, he tells me, keeps him alive and away from harder drugs.

Stuart’s life could change if some regulations and the society had a different approach. It’s our laws and our judgements that separate us.