A rare sight of traditional Indian garments paraded in a vibrant escapism of colour in one of London’s temples.

Barefoot and with my eyes beaming with excitement, I entered the sand-coloured Shri Vallabh Nidhi Hindus temple in Wembley, London. It was 9:00am and there were only a few people scattered inside the building. I let my eyes wander around the sophisticated carvings and lavishly ornates deities, waiting for the ceremonies to begin. 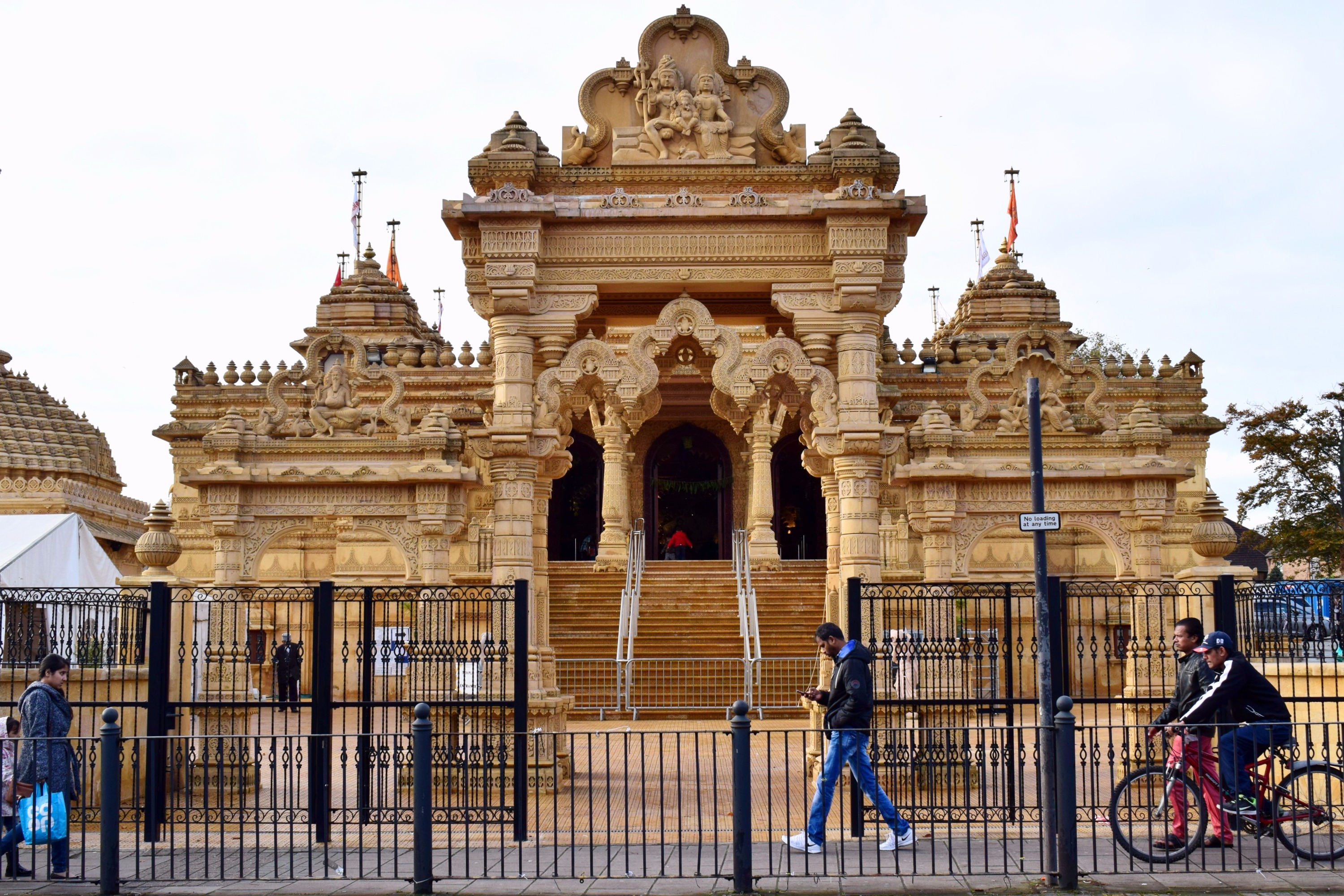 I got distracted by a group of elder women making their way towards the centre of the temple. Wearing flamboyant green, blue and yellow saris, they sit one by one under the protective gaze of deities. A multicoloured arch of tinsels and chiffons was hanging over their heads. They opened up little books and cut the silence with their trembling voices.

Boosting around seven per cent of the capital’s population, the Indian people are one of the largest ethnic groups in the United Kingdom. Within London’s multicultural community, their attire represents a wholly unique splash of colour. If you take a walk in the western part of London – where most of them live, you will be mesmerized by their colourful garments. It’s only London that has seen such saris only India has seen before. 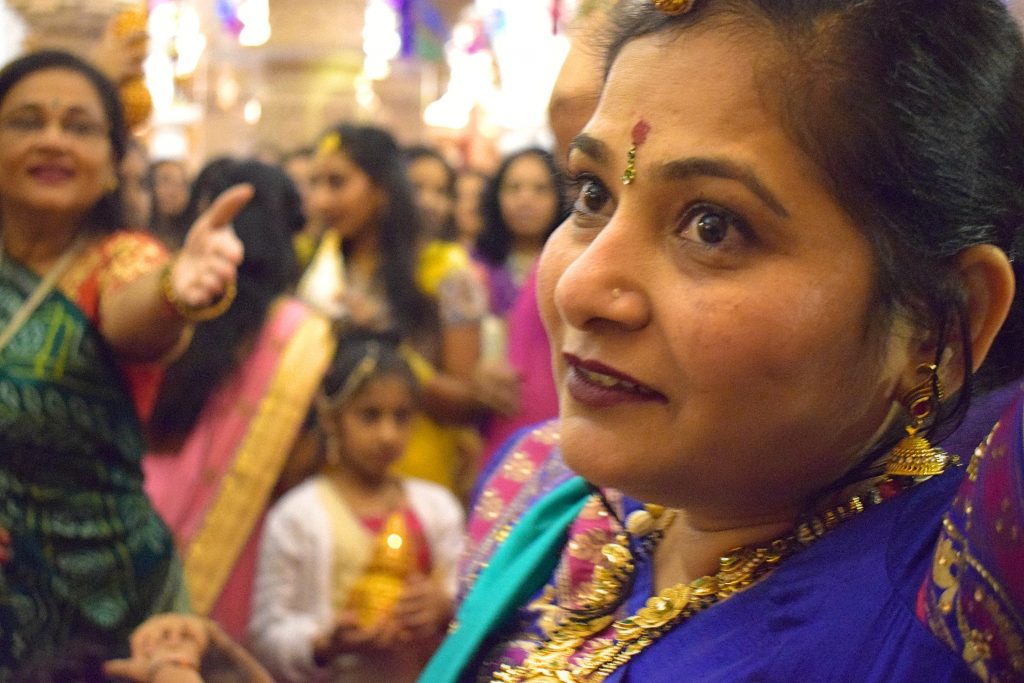 By noon, the temple was overflowed in a jolly stream of people dressed in lively-coloured saris and decorated kurtas (Indian men’s attire). They were saluting each other with respectful namaskaras and warm smiles. The temple came alive to the rustling materials and tingling jewellery. What a thrill to see people playing so boldly with saturated colours, heavy prints and elaborated jewellery! 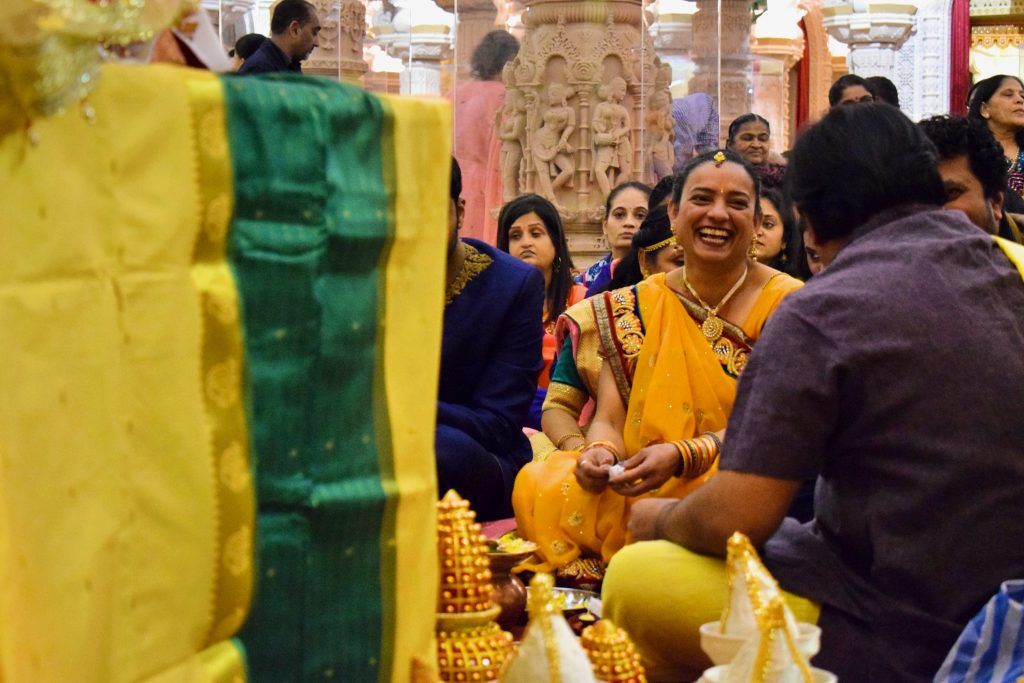 Photo by Madalina Corjuc during the Tulsi Vivah ceremonies

They dressed up for Tulsi Vivah celebration. This is a symbolic wedding between the Tulsi plant and Krishna god, as Hindu priest Bhavik Pandya explains.

This was the place to meet Indian spectacular colour extravaganza. Only for the Indian people, this was not an extravaganza nor an eccentric moment. Their pigmented exuberance is deeply social, cultural and religious – a proud display of a remarkable tradition perpetuated by generations in a row. For them, being dressed in those strident mixtures of colours feels natural, like a homecoming. 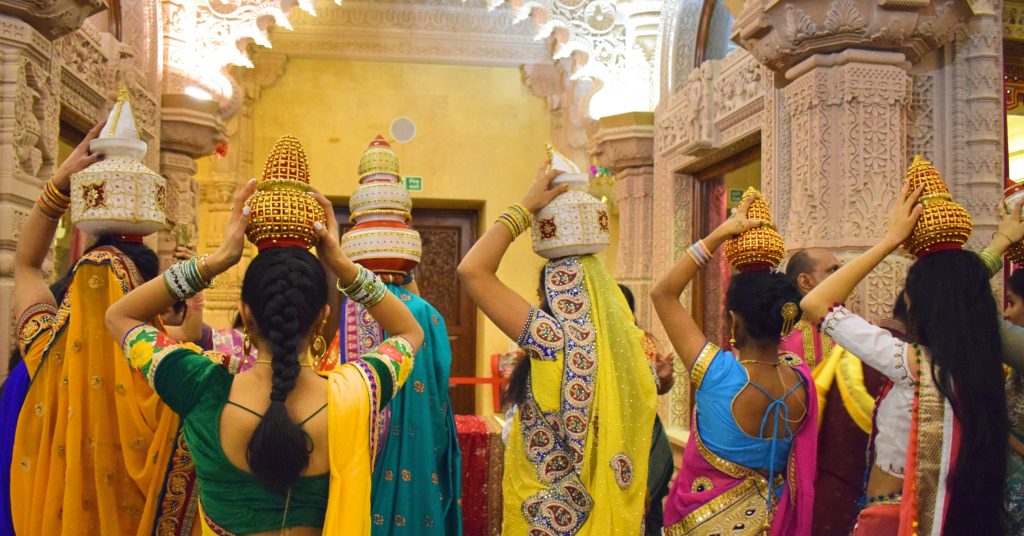 However, the use of colour is not accidental. It is reminiscent of an abolished caste system (a social stratification system) dividing people into four categories: intellectuals (Brahmins), rulers (Kshatriyas), traders (Vaishyas) or menials (Shudras). Each cast had colours exclusively associated with it and its members always wore them in order to transmit their social status. For instance, the people from the highest caste (Brahmins) wore white. Kshatriyas, the second highest caste, reclaimed the red colour. And so on. 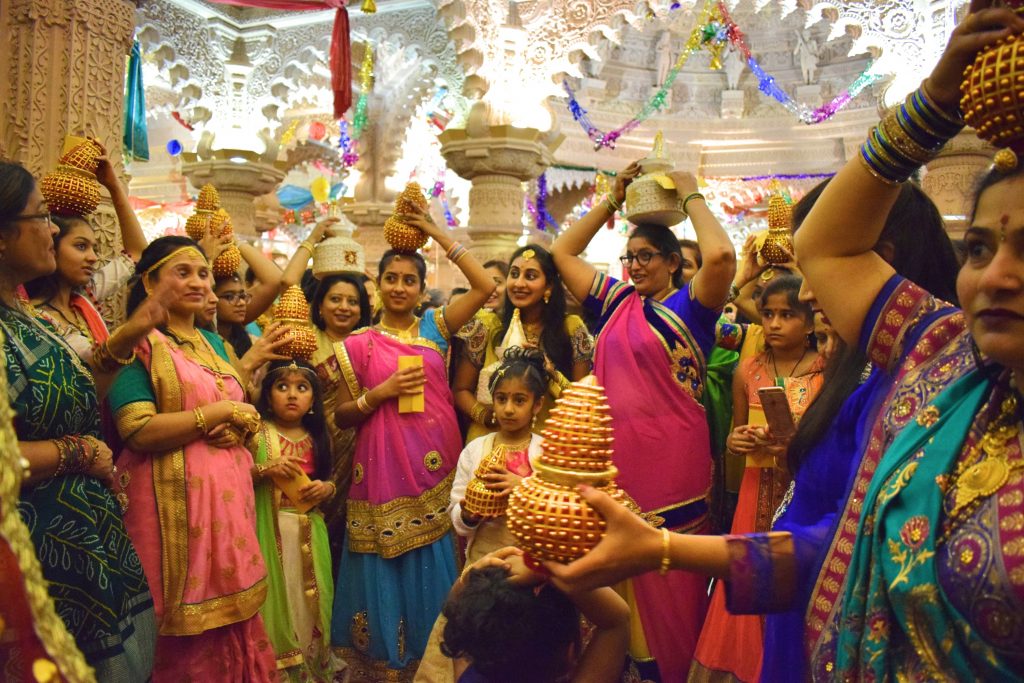 On top of this, different colours are associated with different geographical regions of the Indian subcontinent. While the Brahmin cast generally cultivated the use of white colour, in the western and southern India, the same cast preferred bright coloured garments.

The caste-colour delimitations do not exist anymore. Instead, the differences occur in the way saris are tied and there are more than 100 intricate ways to do it. A very common style drape is Nivi, with the sari falling in evenly pleats on women’s back. It also served as an inspiration for many modern-day sari drapes.

Not surprising at all, the Indian colour display has religious meanings. The arresting pigments are odes to gods and goddess and infuse their sacredness into the garments. A fiery red radiating sensuality and fertility will celebrate the warrior goddess and protective mother Durga.

The blue colour makes a nod to Lord Krishna, one of the most revered deities in Hinduism. He is a god of tenderness and compassion who spent his life protecting humans. The colour stands for bravery and determination. 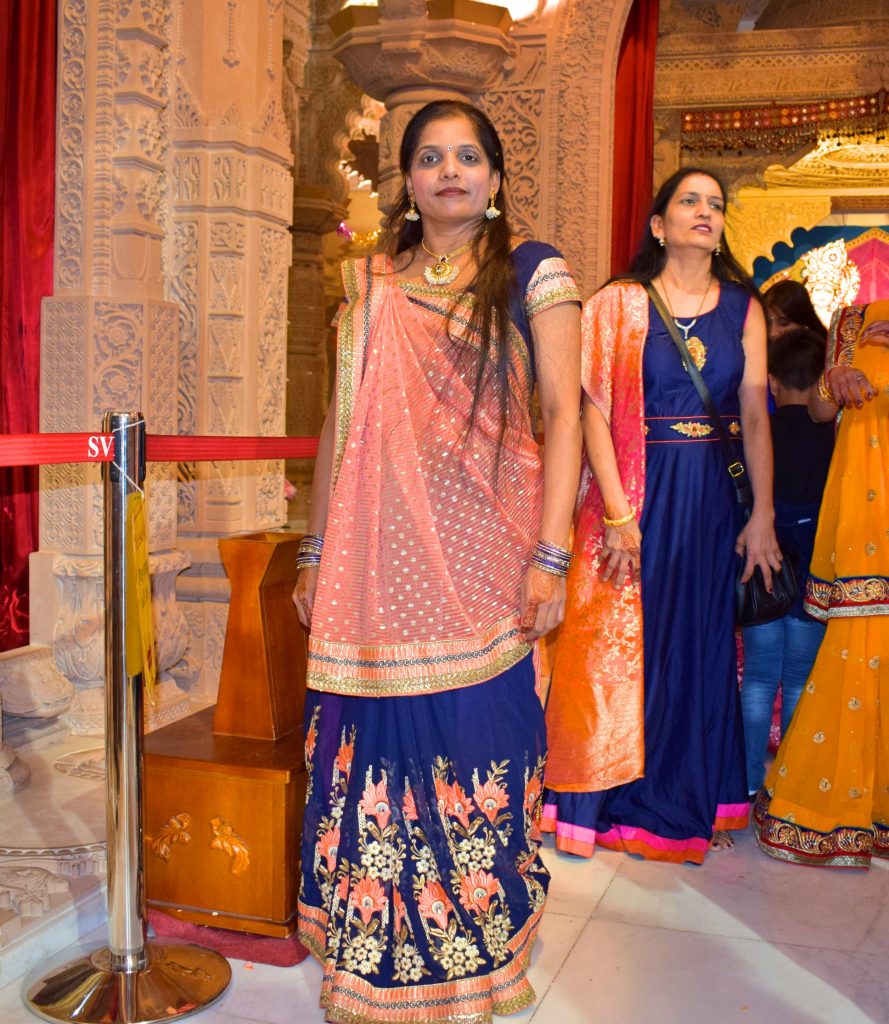 Saffron is also a highly regarded pigment in Hinduism and it conveys sanctity, purity and sacrifice. Hindu priests wear saffron coloured robes suggesting their religious abstinence. The white garments are commonly worn when mourning and they are correlated with death. Even worse, the black colour represents darkness and suggest the absence of energy. 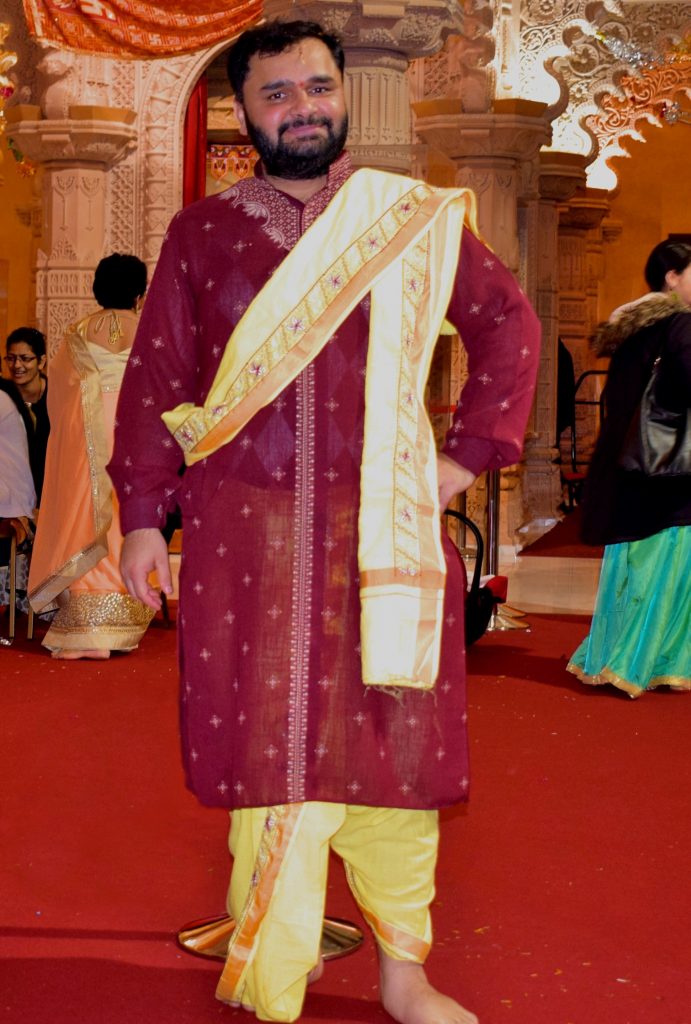 During the Tulsi Vivah ceremonies, you would see women undulate their bodies in graceful saris of joyous clashing colours with exhilarating patterns and abundant golden accessories. Ocean blue, bright yellow, grass green, magenta or turmeric orange… Name any colour and chances are, it was already there. 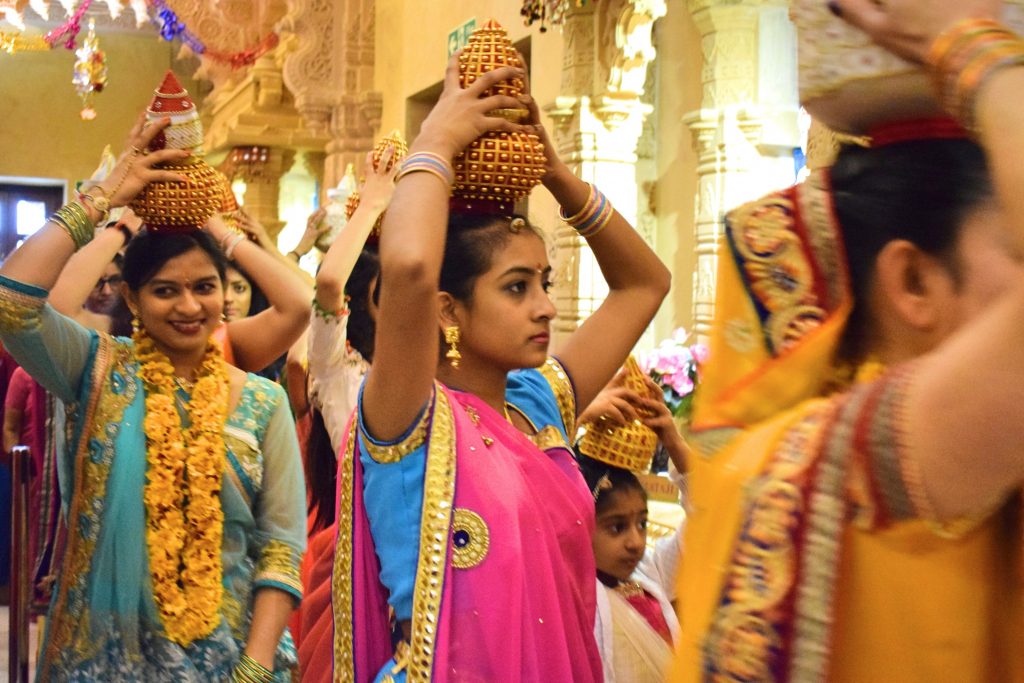 Judging by the way they looked, one would have assumed they were wearing one-piece dresses. However, the traditional Indian attire for women is divided into three different parts. The choli – a midriff blouse – is combined with a lehenga, that is an ankle length skirt. Both garments are then covered with a large piece of cloth called sari, and which can be wrapped in various styles.

Colourful oriental and flowery motifs were growing all over women’s garments, and the patterns were evocative for the Indian heritage. The saris were hanging in the Gujarati draping style with the pallu (the long trailing part of the sari) thrown from the back over the right shoulder and cascaded in pleats. Huge golden necklaces were embracing the women’s’ necks and intricately crafted earrings were balancing on their ears. 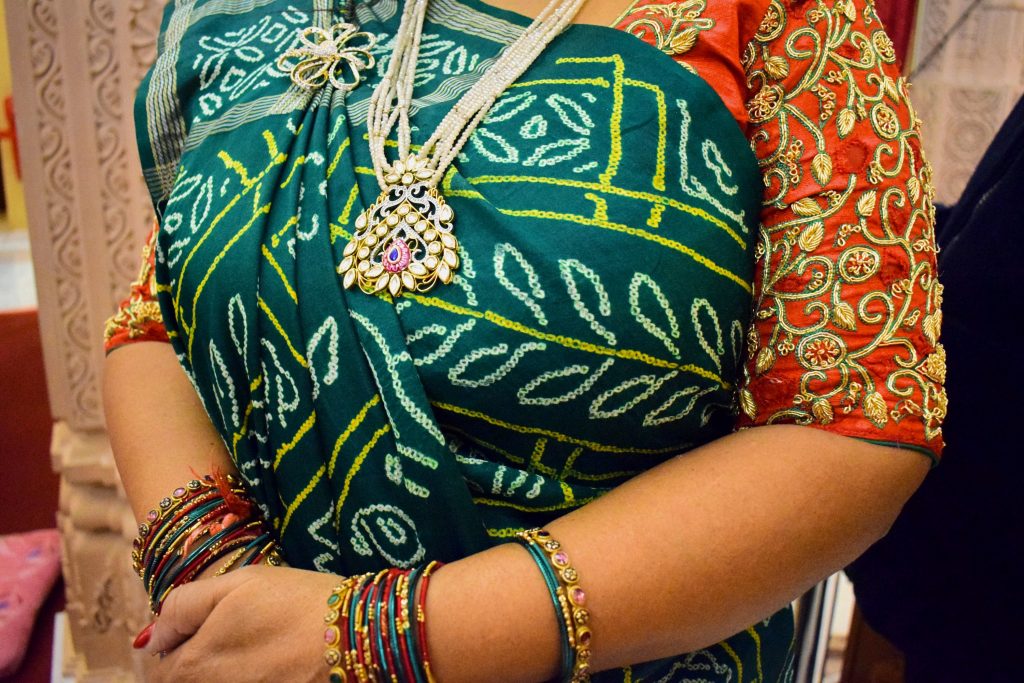 The men were wearing kurtas (a knee-length shirt) combined with loose trousers. While they were twinkling in equally vibrant colours, their patterns were considerable tempered. The kurtas aesthetics were subtler and the fewer decorations they had, were circling their cuffs and the necklines. 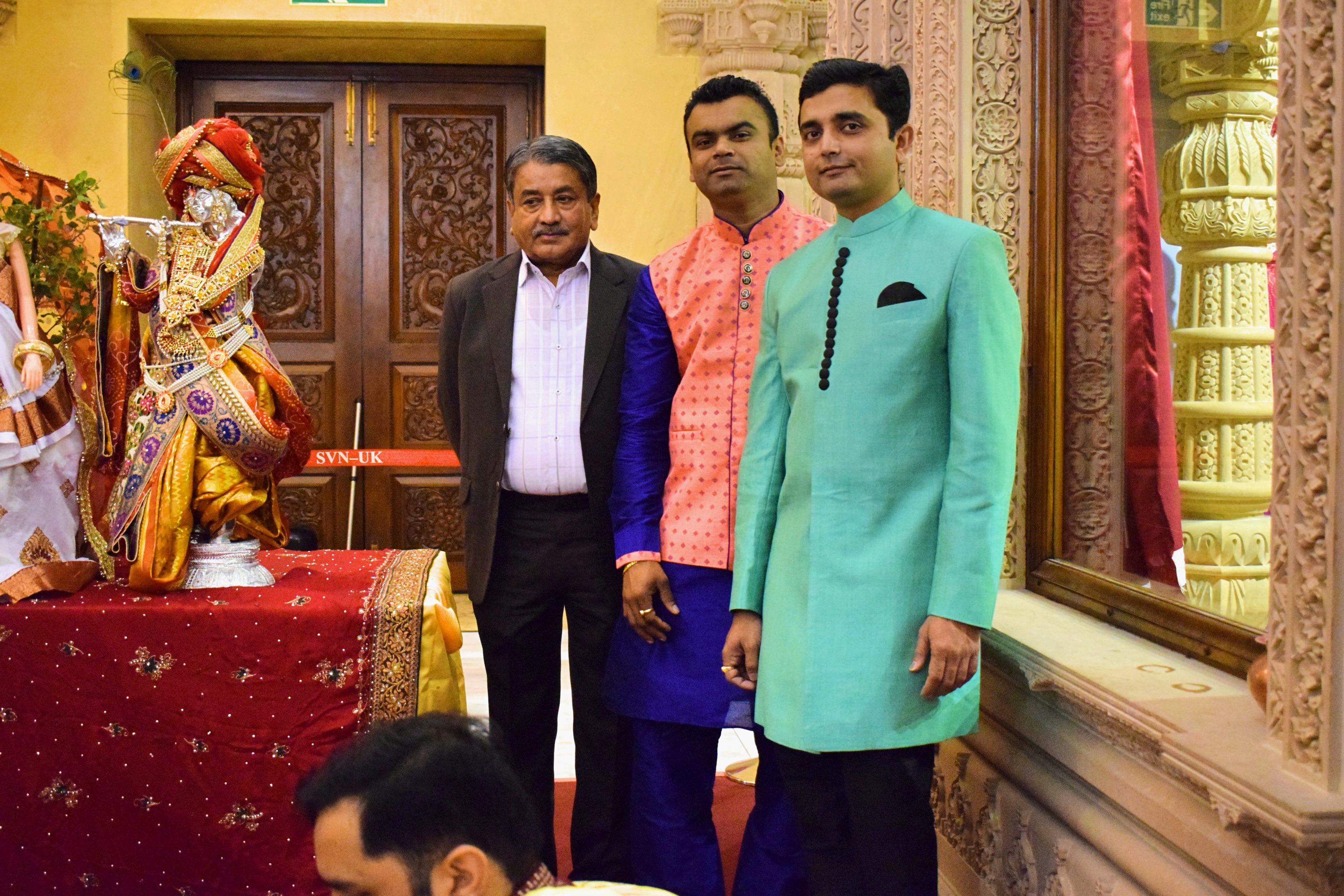 I have met some captivating characters whose traditional outfits paid charming tributes to their homeland. And you can see for yourself the little India that was born in the heart of London.

In the pattern, we trust!

The woman is wearing a sari covered in a golden paisley pattern with deep green borders blooming floral motifs. Such flowering plant designs are representative of the 17th-century Indian art, and the elongated leaf is recurrent on many traditional garments.

The green hue, considered very festive, is colouring the sari and symbolises peace and happiness. The petticoat is in a mandarin-orange and is wrapped in a tight Gujarati drape. Lavish jewellery decorates the garments. 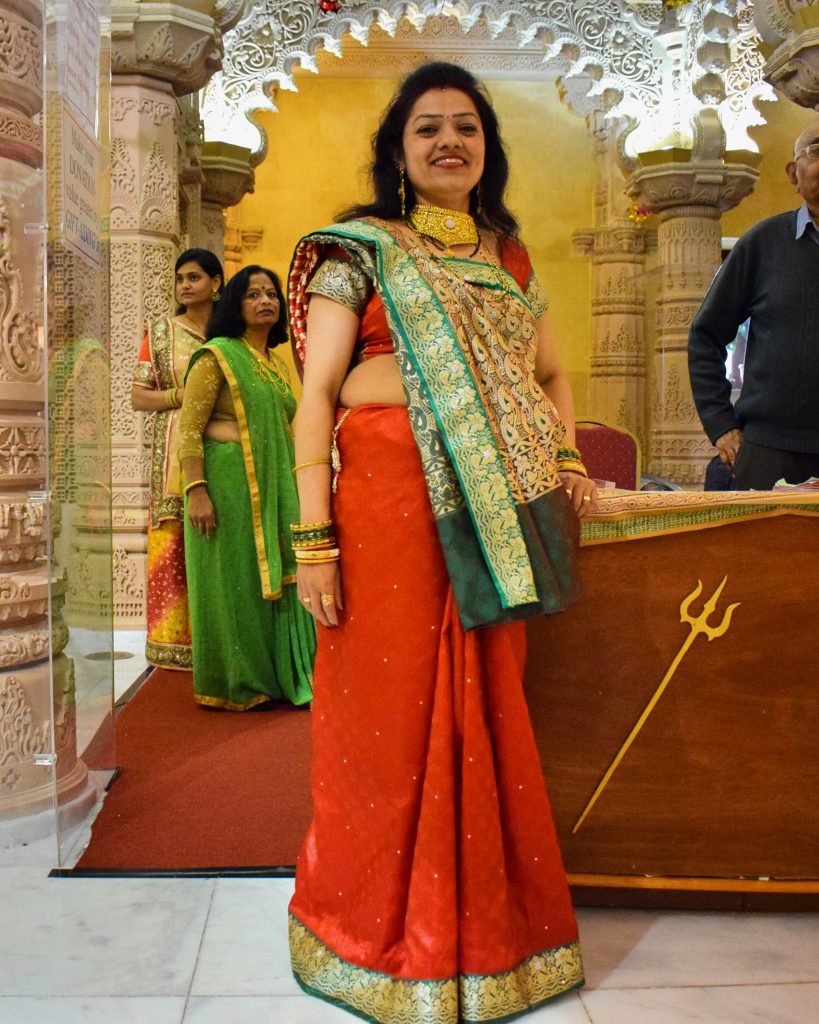 The woman in the picture is dressed in a lemon yellow sari bordered by a tricoloured paisley pattern (green, red and blue). It is embellished in minuscule diamonds quivering with light. The yellow colour conveys sanctity and it is believed to be Lord Vishnu’s exquisite craftsmanship – he has woven it with sun rays into the garments. 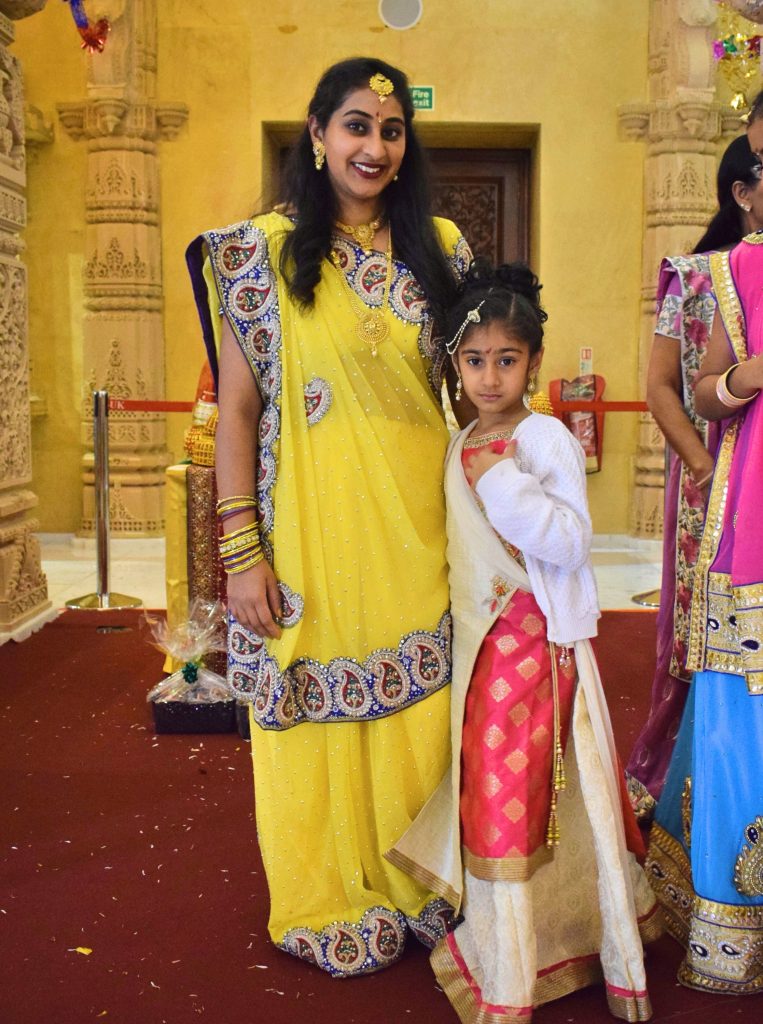 Beautiful Chandbali earrings (moon earrings) are balancing on the woman’s ears. These two crescent moons have a bejewelled centre and graceful white pearls hangings. Its origin can be traced back to the 19th century. 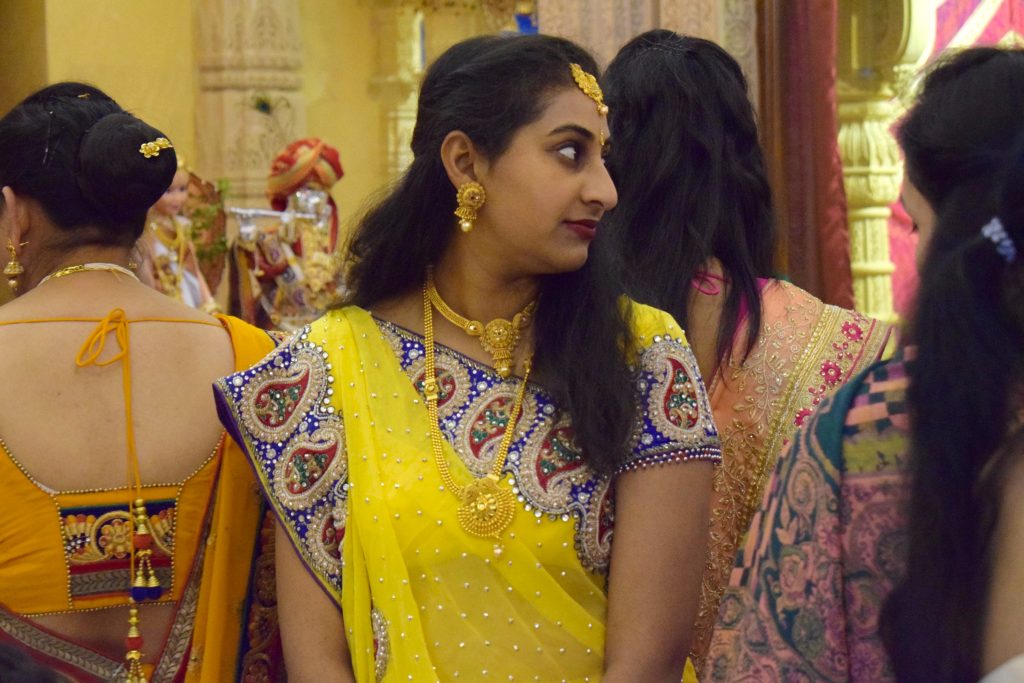 The maang tikka, a golden hair jewellery consisting of a pendant with a hook attached to the hair, hangs on the woman’s forehead. It comes from Tilka, a mark used by the priests when welcoming people to the temple. It also symbolises the powerful third eye of shakti.

The woman is wearing a midnight blue sari with multicoloured little flowers cheerfully aligned on the sari’s borders. The blue colour reminds of Lord Krishna (also coloured in blue) and his acts of bravery. Here and there, few plant motifs are popping. The garments are “hold together” with a subtle purple line. 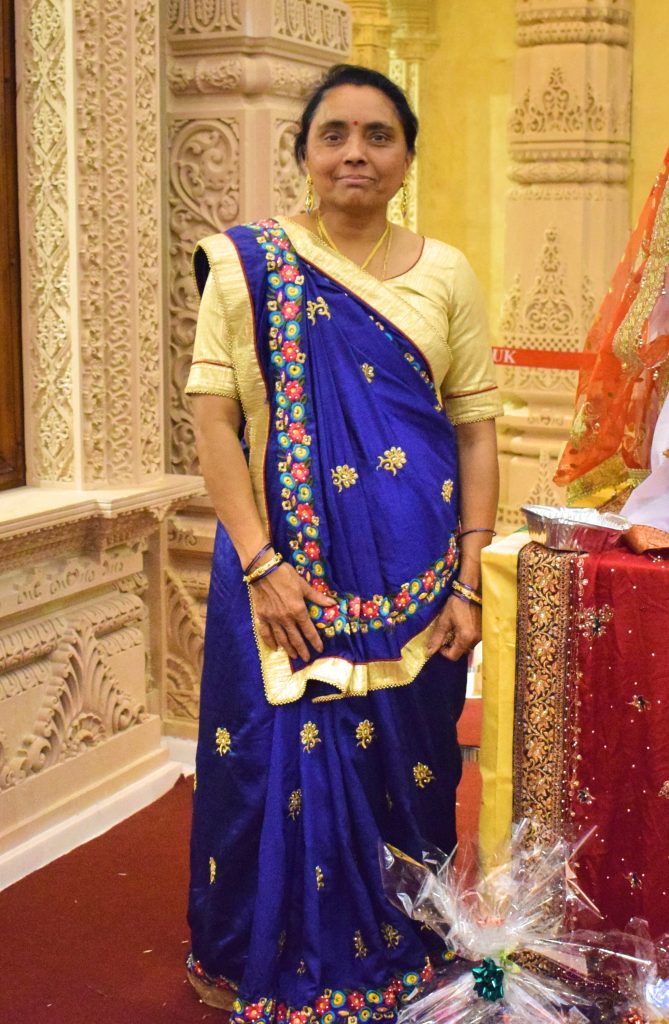 The jewellery in the picture is called maatha patti and it is an elaborated version of the maang tikka. It has two pearl bands encircling half of the girl’s forehead. In the past, it was widely adopted by women of the aristocracy. 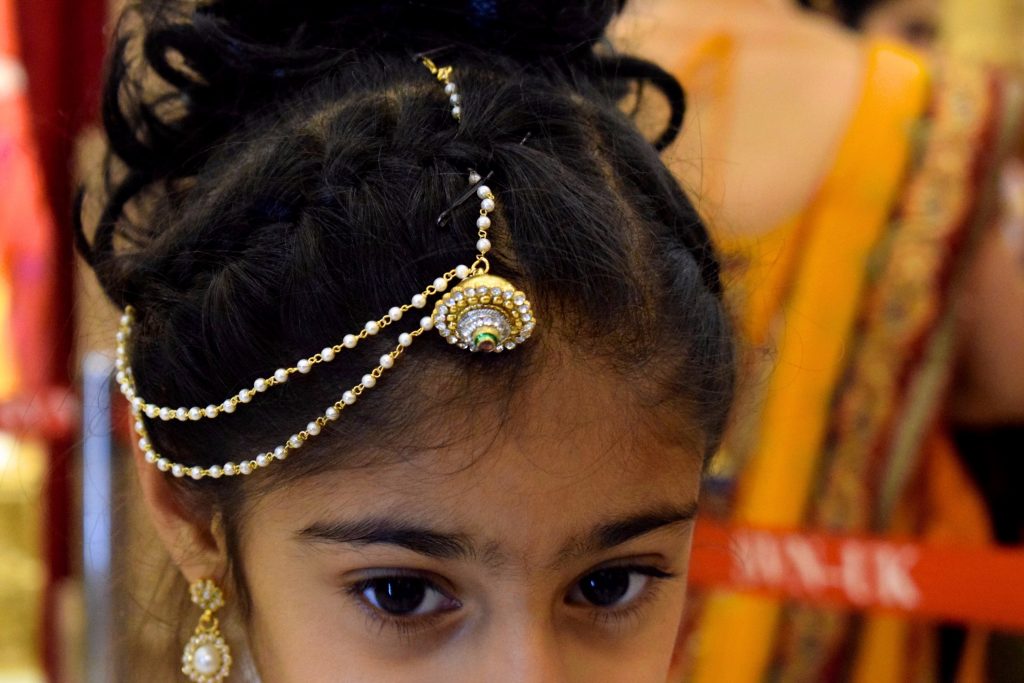 It is a rare moment when fashion decides to escape the boredom of conventional colour combination and enthusiastically climb new heights of wild and daring chromatics. And even rarer are those occasions when the new-found colour glory is not, in fact, a gaudy tragedy. For this reason, it is always rejuvenating to see how India plays out the colour spectrum to inspire and even push the rest of us to learn the dynamic language of colours.