Loved by Londoners and art critics, the Royal Academy exhibit is about to come to an end, closing on January 2nd. Below, the Voice of London reviews it for you.

“Unique”. “Breathtaking”. “Emotional”. These are only some of the words visitors have used to describe the Royal Academy’s latest exhibition, Abstract Expressionism. By the time it opened on September 24th, the show had already been five-starred by magazines and newspapers and praised by an enormous number of art critics.

Comprising artists such as Pollock, De Kooning and Rothko, the exhibition brings together the major artists from the abstract expressionism movement, developed in the United States in the 1940s following World War II and putting New York City at the center of the western art world, a role previously fulfilled by Paris. At first considered a rebel movement and looked down on by art critics, it ultimately became the first purely American movement to achieve international influence.

Divided through an array of rooms, the works bring the viewer on a magical journey filled with colours and emotion. Curated by independent art historian Dr David Anfam and Royal Academy Contemporary Curator Edith Devaney, the exhibition aims to create a two-way encounter between the artist and the viewer. 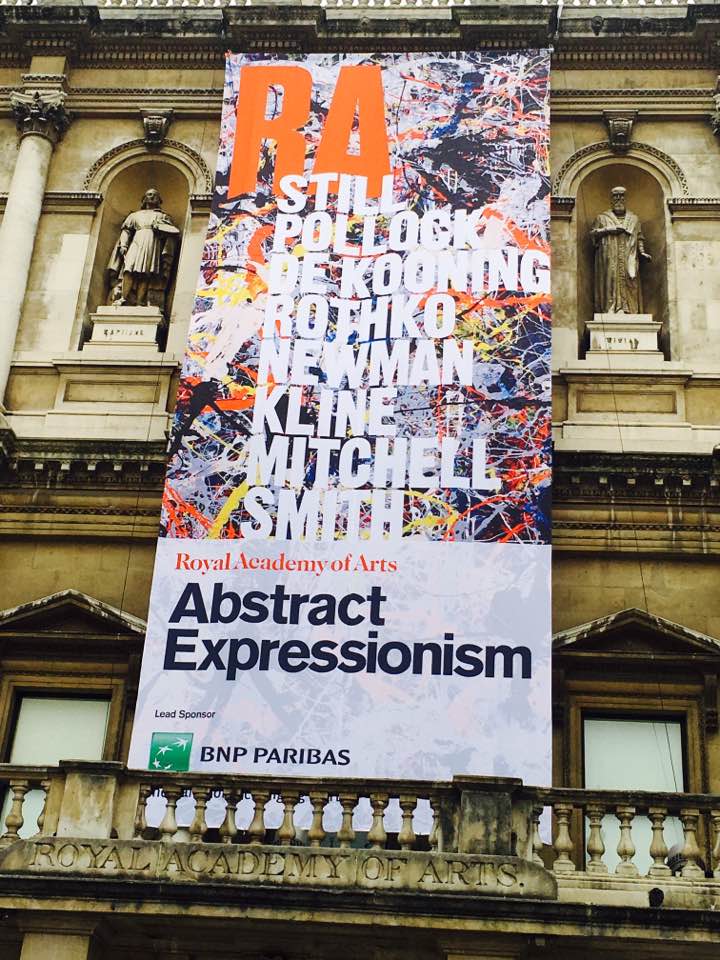 Abstract Expressionism at the Royal Academy | (All images by Cecilia Peruzzi)

Since it’s opening day, the turnout has been massive, with people queuing outside for hours just to get tickets. London being the tourist destination that it is, meant the exhibition never went empty for a day, attracting tourists other than fellow Londoners. Member of the Royal Academy press team Johanna Bennett exclusively told the Voice of London: “Affluence has been amazing every single day since opening, it’s been attended by quite a big span”. And things are only about to get better with the holidays coming up. “The exhibition is attractive to all audiences actually, from young people to more mature viewers, that’s probably the secret of its success” Bennett commented. Although requested, the Royal Academy of Arts was unfortunately unable to share numbers with the Voice of London, due to the exhibition still being ongoing.

Eriberto Bettini, owner of the Bettini & Co. Gallery in Italy, visited the exhibition on its opening day in September and commented: “The exhibition was curated to the smallest detail, the research behind the choice of paintings is just astonishing. What amazed me the most was the fact that the curators didn’t only think about that, they obviously conducted quite extensive research when it came to deciding what order the works had to be divided in and what the right lightning was for each and every one of the paintings. Not many exhibitions can say that, and it undeniably changes the way the viewer enjoys the exhibition”.

Bettini also observed the choice of artists exhibited, praising the fact that the curators chose to show not only works by the major exposers of the movement, but also ones of lesser-known artists. “It was such a joyful surprise to encounter works by artists such as Tobey, who were unknown until some time ago” he remarked.

The Voice of London later ventured to the Royal Academy of Arts, finding that an enormous amount of young Londoners had decided to check out the exhibition too. Compared to the RA’s previous (and very successful) exhibition, Painting the Modern Garden: from Monet to Manet, Abstract Expressionism seemed to attract a much younger crowd. “Abstract expressionism is a rebellious movement. At the time these artists were stepping out of conventional painting techniques and going against art critics. This movement is spontaneous and creative, young people might relate to it just by looking at it and find that they are able to connect to the artist. In Impressionism, you can’t really do that” commented Bettini. 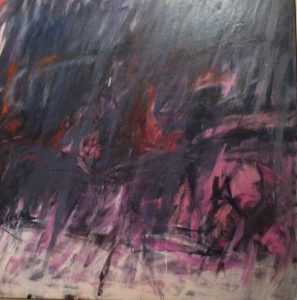 A snippet of Jack Tworkov’s Transverse 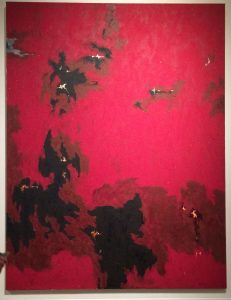 We decided to talk to some of the visitors outside the exhibition, asking them their thoughts about it and why they felt so compelled to go see it:

“I took history of art in my first two years at university and it really sparked an interest in abstract expressionism for me. There was such a great quantity of pieces on display, and the work covered a wide variety of artists so it really allowed the public a full exploration of abstract expressionism and the many forms it can take. I think one of the aspects that largely draw attention to this type of art, at least for me, is its size and dynamism. There is a photograph of Newman from 1958 in which he is standing in front of one of his works, Cathedra, in New York. You can see him standing right up close to the immense 243 x 543 cm piece, so the work filled his visual field. This made their works more than paintings. They aren’t meant to be experienced simply optically, they are meant to be an experience, a sense of drama.. each piece representing emotion in its rawest form. There’s also a uniqueness about it- a great individuality between each artist.” – Fey, 21

“It was great to see such a huge body of works all together. We usually get to see artists’ (such as Pollock) solo exhibitions, so the experience was as unusual as it was amazing. Studying art, this exhibition was a must see. Everybody seemed to be so amazed after seeing it. It was so well advertised and the reviews were always great. The exhibition itself was quite well organized. The number of paintings was unbelievable. When walking through the rooms it was quite easy to get lost, especially between rooms 7/8/9/10. The description of each room was detailed and useful to understand an artist’s works. The best rooms were those of Pollock, Rothko and De Kooning. The best thing was being able to walk from a room to another, comparing each artist with the others. In my opinion, young people are fascinated by this kind of art because of its spontaneity and dynamicity. The Expressionists are original, revolutionary and rebellious. This is something that you won’t always find in contemporary art.” – Emma, 20

“I think that young people nowadays are more attracted to a more ‘classical’ movement such as Abstract Expressionism rather than a piece of contemporary art. And for contemporary art I mean those nonsense things you can find at museums and exhibitions. There really is no paragon between any type of art pre-1900s (including the 20th century one of course) and whatever came after that.” – Guido, 21

“I really enjoyed the exhibition, the works displayed were really breathtaking, especially for those who, like me, love this particular movement. What was great about it was the fact that it gave me the chance to discover new artists as well as the ones I already knew. It was quite easy to figure out the right path to explore the exhibition and although we were given free audioguides (such a marvellous thing) there wasn’t a precise logic to the numbers in it. I am extremely passionate about Rothko’s work and would have liked for a sign to point out which direction to view the painting from, different points of view give different feelings, you know? I was really happy with it though, and although it was a little expensive at £16, I totally do not regret them!” – Gaia, 20

“I am generally an art lover and found this exhibition incredibly beautiful, and organised so well! I also enjoyed the fact that it was so well-explained by the audioguides. Expressionism is such an intruiguing art movement, where the colours, the techniques and the meaning behind paintings such as Pollock’s or Rothko’s is very captivating, they’re trying to let you feel what the artist is feeling, which is very inspiring. Although this movement is technically a part of contemporary art, I love the fact that the artist wasn’t only looking for innovation when it came to his work, he also wanted to incorporate emotion in it. Nowadays it’s sad, because a lot of artists only think about coming up with new ways to create art, without giving it any feeling. Displaying a bunch of pillows in a corner isn’t something that gives you any emotion and I don’t think it’s something you can really understand unless they’re explained to you.” – Francesca, 20

Voice of London approved? You bet it is. This exhibition might just be the Royal Academy’s best to date and the array of works displayed will leave you inspired for a very long time. Which means you’re going to want to buy the catalogue- and a set of acrylics, just because you never know, you might be the next art genius.

Abstract Expressionism is on display at the Royal Academy of Arts until January 2nd, tickets are £17 with concessions available. Booking is recommended to avoide long queues. Click here to book tickets to the exhibition.

The exhibition also sparked quite some Instagramming, check out some of the best posts below: 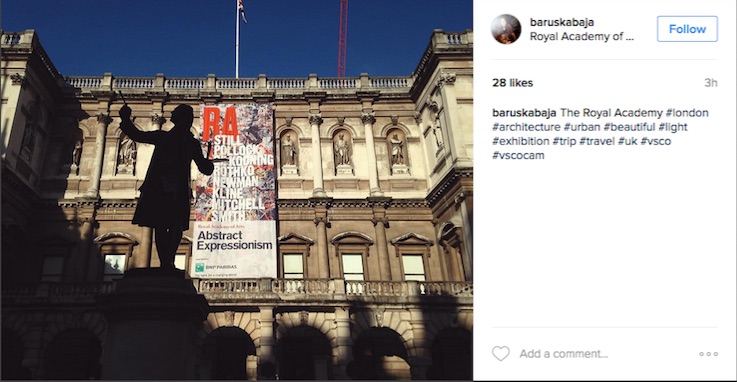 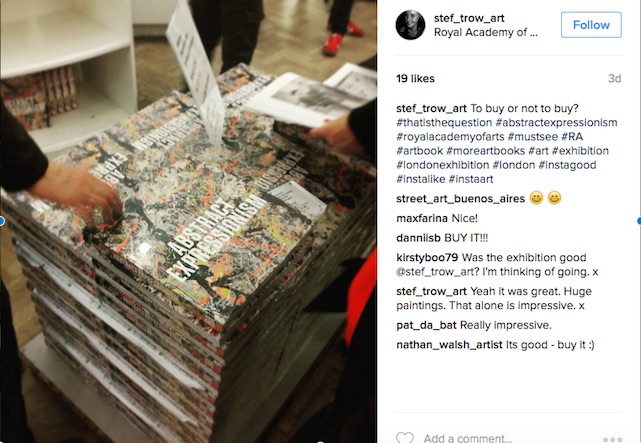 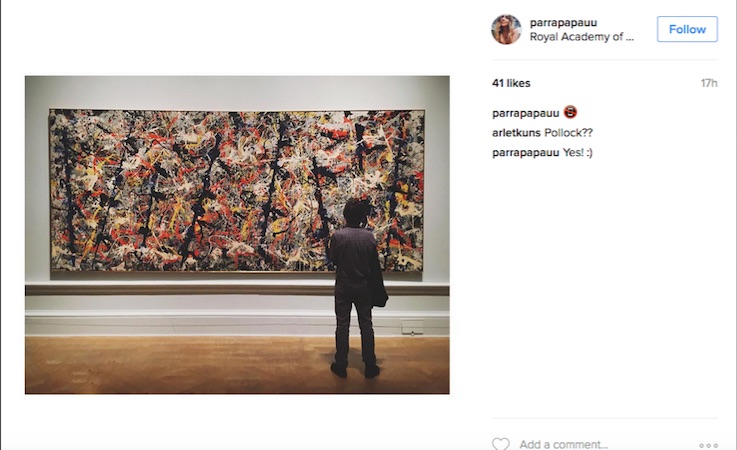 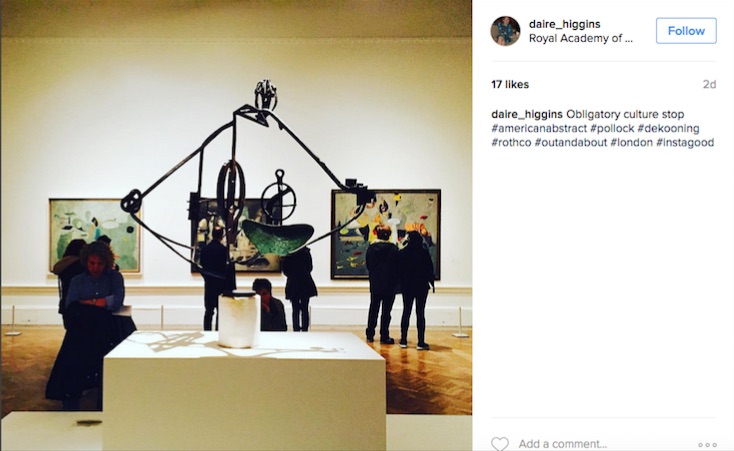 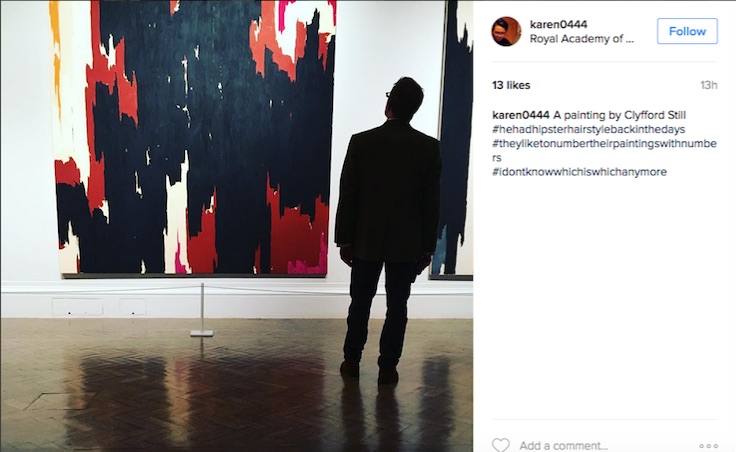 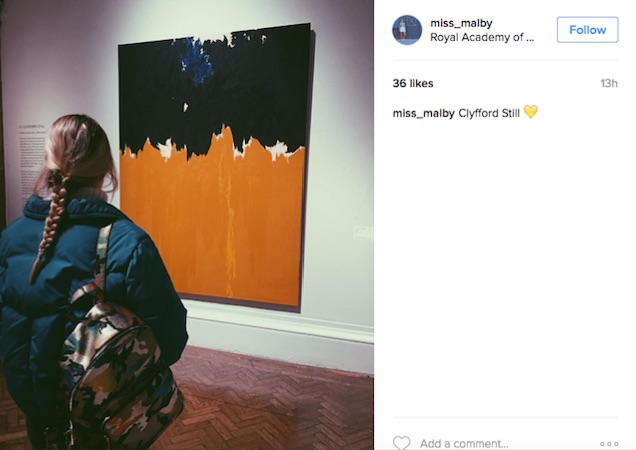