His House is a horror film so crippling you’ll be scared to switch off the light.

Imagine escaping war-torn Sudan to come to the haven that is Great Britain only to discover an evil force is waiting to destroy you? This is the very reality for young couple Bol and Rial.

Bol, played by Sope Dirisu and Rial, played by End of the F***ing World actress Wunmi Mosaku manages to escape Sudan with their young daughter Nyagak, where two rival tribes are killing each other.

However, the sequence of the couple’s unfortunate events begins when the boat they escape on becomes too overcrowded, ultimately killing their daughter. Despite the couple’s survival, the next chapter of their lives leaves the couple wishing they had died with their daughter. 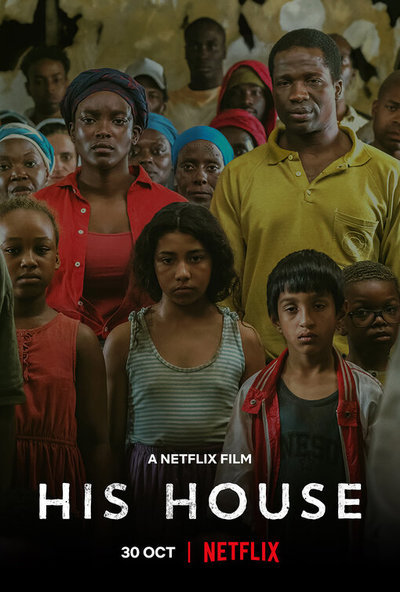 Three months after their escape, Rial and Bol are granted asylum and are even given a house on the outskirts of London. Sounds like things are looking up, right? Wrong.

Although two stories, the house is run down and teeming with vermin and rats. Mould and mildew are the only tangible decoration that paints their walls. But it’s better than being stuck in a country where death is a possibility every day.

The couple attempts to rebuild their lives, but alarming things start to happen in their home. Cries of their deceased daughter bellow out from holes in the walls. Nyagaks voice wails out “Mama”, but she is dead right? Director of the film Remi Weekes orchestrates the tension perfectly.

The moments of silence in between each cry, when objects start moving without a hand to touch them. The intensity is breathtaking. Viewers will quite literally curl their toes and cover their faces with their blankets.

The story unfolds when Rial comes face to face with the evil spirit lurking in their home and reveals himself to be a witch who will not rest until the couple leaves the home and returns to Sudan. The witch reveals that Bol had stolen something, and in order for the couple to be at peace once again, Bol must put aside his pride and return back to Sudan.

Pride encapsulates Bol, making him refuse to leave their new home, despite their unexpected visit, creating further tension between him and his wife.

The psychological thriller does more than just play with the young couple’s mind. It makes viewers question everything they once knew about horror.

Between the themes of immigration, a refugee crisis and what it means to be black in Britain, His House gives viewers a Peelesque experience. One that will leave audiences sleeping with one eye open.