“It’s not you, it’s me”, is one of the most used break up lines ever. You probably know that, but what you don’t know is that break up season has officially begun. It is known as ‘the turkey drop’ because it happens right before holidays like Thanksgiving and Christmas.

Even though this trend is typically associated with younger generations, anyone can get dropped before the winter holidays. In 2010, data journalist David McCandless poured over more than 100,000 Facebook profiles, only to find that the peak of splits happens right after Valentine’s Day (yikes!?) and in March (as known as ‘spring cleaning’, that old boyfriend can go in trash together with that washed out pair of Levi’s) — but another significant spike showed up shortly before the Christmas holidays, too. 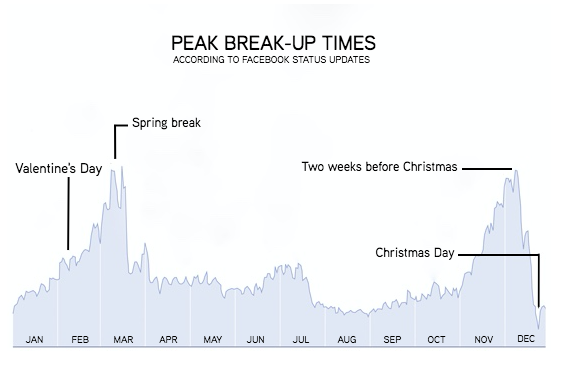 According to these statistics most couples don’t spend days before the holidays thinking how to surprise their loved one, but rather how to dump them. Can’t put the blame on anyone though, as there are plenty of reasons to move on. There is always someone who is too scared of commitment, while others simply do not have what it takes to meet the ‘monster in law.’ Don’t forget about the ones who are sceptical about love in the first place and wait until Christmas to break someone’s heart, since family and friends are around to take care of the fallout.

This behaviour is especially typical for younger generations who move away from home and start exploring themselves and their needs. Being surrounded by their peers, they get hit by that it-is-time-for-a-change feeling, which often results in transitioning from taken to single and ready-to-mingle. While it is pretty much impossible to estimate how many couples participate in the turkey drop every year, the answer is most likely too many.

On top of that, some people religiously live by the ‘new year, new me’ rule, which results in them sliding single into a new chapter of their lives. Think about the feeling of excitement you get when making New Year’s resolution plans, such as deciding your body is a temple that has to be taken care of — you swear you won’t touch carbs, alcohol or fatty foods and will be glued onto the treadmill in the gym *fails miserably three days later, but psssst*.

Well, quite similarly facing the idea of a new beginning is a rather motivating factor for walking out on a relationship that has been dead for a while. And that is definitely not a feeling that is restricted to a certain age. And even though it sounds harsh, it shouldn’t come as a surprise. Laura Bilotta, author, TV host, dating coach, matchmaker and founder of successful dating website Single in the City told Bustle that people see leaving a relationship as an aspect of change which makes them feel lighter with the new year approaching.

With break-up season around the corner, we want to know if you have ever been dumped/have dumped someone before the holidays?

People of all ages are breaking off their short term relationships, long term loves and even marriages in the lead-up to the ‘most wonderful time of the year’. I don’t know about you, but I went through the typical “I don’t need a man *sips alcohol* to make me happy” phase after each holiday spent alone. For now, I cross my fingers in hope of not getting a cold turkey dropped in front of my feet before Christmas, and I hope you do the same! (If you are in a relationship, if you are not, lucky you).