Apart from queuing, there’s nothing we Brits like more than people watching and being nosy. As art, antiques, furniture, jewellery and collectors’ pieces all came together under one roof at the iconic Kensington Olympia Exhibition Centre, we went along to eavesdrop at the ‘IKEA for the rich’. 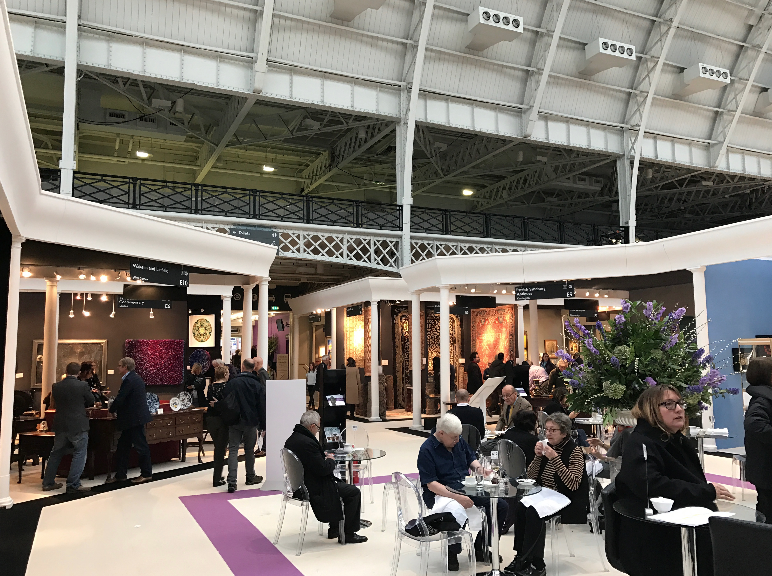 I’m being given that look. The one where pained expression and exasperated voice come together to begin a battle you know you’ve already lost.

Arts and antiques don’t have a particularly thrilling reputation, and the fact that I’ve just suggested spending a Sunday afternoon surrounded by them isn’t usually an offer that most girls want from their boyfriends.

“We won’t be long, I promise.” The battle continues. I blame university.

I’m doing the sheepish smile and semi-shrugged shoulders, and as I hand the ticket over to the assistant at Kensington Olympia, I hope to God the promise of food at the end of it will make me victorious.

Celebrating its 26th year, the Winter Arts and Antiques Fair attracts over 20,000 visitors across seven days and sees over 100 hand-picked dealers clamouring — in a civilised, British way of course — to flog their wares.

From Jurassic fossils to extraordinarily grand furniture, the Fair is one of the most prestigious in the UK, and attracts the crowd to boot.

“Darling!” The first of the cries goes up. The lexicon of the privileged in the air.

“Look at this. Isn’t it gorgeous? It’d look lovely on the mantelpiece… you know… next to the vase.”

It’s a typical case of “Wandering Husband”. Caught off-guard and zoned out, he puts on a good show though.

Carefully examining a mahogany tea caddy, nodding in all the right places, pointing out other pieces to his oblivious wife, he even finishes off with a “Why don’t we have a wander around and see what else there is?” as he discreetly looks at the £2,400 price tag and guides her away.

The Fair is a unique mix of traditional and quirky.

You’re as likely to find a pair of antique duelling pistols as you are a contemporary painting, with prices to match.

Items in this treasure trove start at £100 and stretch to £1 million, and strict guidelines govern what can and can’t be shown.

Each morning, before 11am, every item is checked by specialist experts from the UK, Europe and the US.

With the huge range of pieces on offer, the team is split into 32 committees, all looking for authenticity, date and condition.

There aren’t any restrictions on how old or modern something can be, but the Fair says that contemporary pieces will only be accepted if they’re of international renown, or have proven market value. If you’re bringing a piece that needs some restoration, well, you might as well go home. 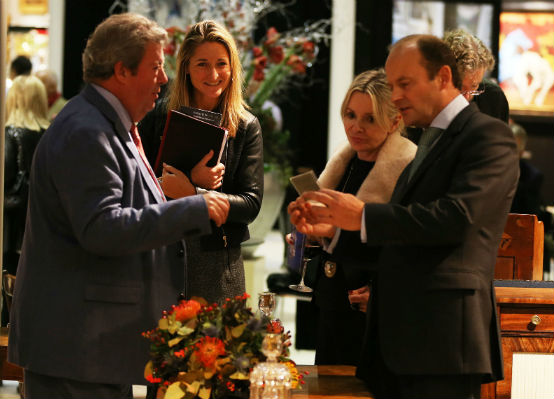 They’ve taken a shine to a 17th-century table clock. Intricately finished with a gold lattice, admittedly it’s an impressive piece.

Fair regulations say that all clocks and watches must be in sound working order and come with a 12-month guarantee, which seems a bit superfluous considering this one’s age.

“It’s crazy when you think how old that actually is. Like… over 300 years old. And it still works! Isn’t that mental?”

“Yah it’s, like, really pretty and shiny too. The gold around the handle’s amazing.”

The raised eyebrows are back. Hopes of a smidgen of stimulating conversation dashed, and eyes on the brink of rolling. The mind boggles, it really does.

Although the art students don’t have anything interesting to say, the Fair is otherwise renowned for its engaging talks.

Speakers from around the world have shown up to offer their expert knowledge for free, including curators from some of London’s most-loved museums, and interior designers whose clients demand the best.

Over the week, Dr Chris Spring, co-curator of the British Museum’s South Africa: The Art of a Nation exhibition, has been here to talk about how art has played a key role in the country’s politics.

Interior designer Rachel Laxer, whose clients span from Silicon Valley to the French Alps, New York City and London, has also spilled the beans on why antiques and vintage pieces are so important, and how they can be used as a long-term money earner.

The backbone of the Fair. Without them, there’s no art, and they know it. Skilled in the art of camouflage, they sit looking at their phones or laptops or half-chatting to other dealers while you take in their wares. Like a Venus flytrap, they wait to one side, and once your interest is piqued and it’s too late to back out, they close in and engage. Have your small talk and excuses ready.

The losing side of the battle, they wander the Fair in a joint state of boredom and anger. They’ve been dragged along to give their opinion, which is usually then ignored. You’ll find them half a pace behind their significant other, phone in hand and dragging their feet. They smile politely and nod on demand — trying desperately to think of things to suggest to get them out as soon as possible.

They actually know and understand this stuff. They’ve ventured outside their usual gallery setting to do something “edgy” and “different”. Wearing a polo neck and glasses, they ponder the art with a squint and tilted head – stroking their beard or twirling their hair as they consider “the true meaning” behind the singular brush stroke on canvas.

They’ve been in this game for years. Wearing a tweed jacket, corduroys and a patterned tie or bow tie, they slowly make their way around the fair, stopping to shake hands and exchange jokes with dealers. They live in a constant state of nostalgia and reference stories of yesteryear, or hark back to “the good old days.”

Sketchbooks and cameras in hand, they’re here to collect ideas. They wander around in pairs, some dressed in colourful bomber jackets and weird leggings, others in oversized jumpers and skinny jeans with their hair tied back. They pretend to look interested and knowledgeable as they Google artists on their phones.

They have no interest in art, design, antiques or whatever the Fair is about. They’re purely here for the free alcohol and wander around, taking every flyer and coupon in the hope it’ll lead them back to the bar for another drink. Also, see number five.

They’re here for two reasons; to find stuff to decorate their suburban house (because shopping in John Lewis is just too mainstream), and to show how much money and time they have. They wander around — red or white chinos are a staple wardrobe choice — making jokes and laughing loudly so everyone can hear them pretending to have a good time. Everybody hates them.

A couple of stalls across, one dealer is having an animated conversation, hands gesticulating dangerously close to a piece that, frankly, would look better in a thousand pieces on the floor.

“She’s been buying from us since her very early 30s. She’s moved around a bit and we went over to look and she had 36 pieces.

“And I’m not talking 36 small pieces; some were a metre and a half high and one was bloody enormous. We had to bring it back from New York.”

Goodness, I’m really having a hard time controlling my tears and bleeding heart. 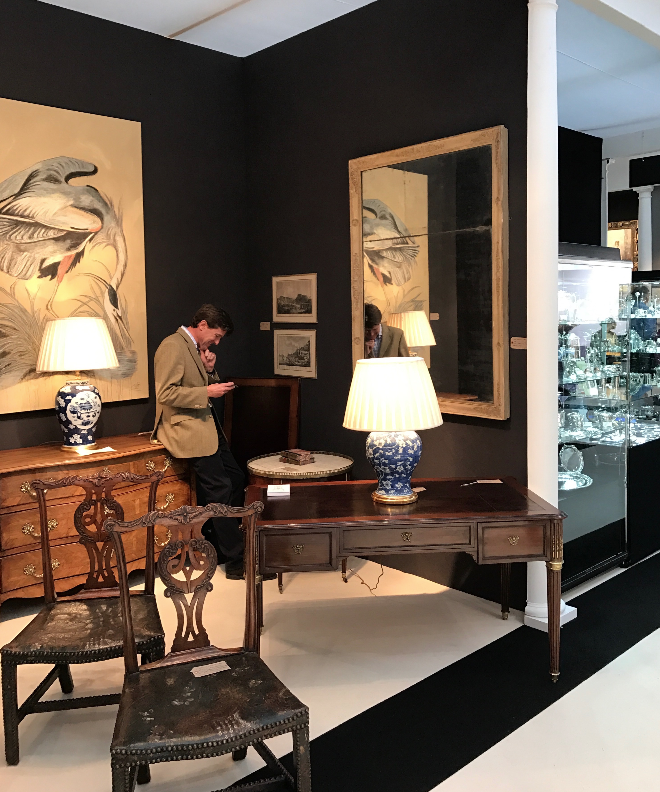 Staying in one place to slyly record audio on my phone has its downsides.

I realise I’ve inadvertently been staring at a £4,500 cigar cutter  — in the form of a guillotine — for a little too long.

Luckily, being British, small talk isn’t too much of an issue.

A few shrewd head nods, the admission that “It’s lovely, although I’m not a smoker”, and it’s just started raining outside, so the weather card closes down the conversation nicely.

The look is back. We’ve spent the good part of an hour wandering and trying not to socialise with anybody and the stony-faced expression from my girlfriend, cheeks puffing to complement the bored sigh, tells me all I need to know.

The Winter Arts & Antiques Fair was held at Kensington Olympia Exhibition Centre between 31 October – 6 November 2016. It returns to London next year.