Boasting a standout array of names already confirmed, Slam Dunk Festival is shaping up to be the definitive home of alternative culture in 2019 – as an unmissable celebration bringing exclusive moments and jaw-dropping favourites across Leeds and Hatfield. With the likes of All Time Low, Bullet For My Valentine, New Found Glory, Glassjaw, Simple Plan, The Menzingers, Waterparks, Gallows, Turnstile and more already announced, Slam Dunk 2019 continues to grow – with NOFX set to bring their Punk In Drublic takeover to the festival for a stage packed with the very best in punk.

After making waves with its debut in 2018, Punk In Drublic has already appeared in the US and Europe bringing some of the most iconic and beloved punk bands under one roof for truly special shows. Marking its only UK home of 2019, the Punk In Drublic stage will be the go-to hub for punk royalty – featuring the previously announced Mad Caddies and stage headliners NOFX.

Leading the new announcements for the stage are underground titans Bad Religion, lead by the blistering presence of frontman Greg Graffin who for nearly four decades has soundtracked and stood apart as a true punk icon. Returning to UK shores, it’s a chance to catch one of the most influential bands of all time, firing on all cylinders at Slam Dunk 2019. Festival favourites Less Than Jake will return to Slam Dunk with their unbridled ska hits, playing what’s sure to be one of the busiest sets of the entire festival. Outspoken and unrivalled, Anti-Flag have come to stand as one of punk’s most defiant voices – rallying against injustice and the world around them with an unstoppable sound and fury, one that’ll be ringing out in full as they head to Slam Dunk 2019. Not only boasting legendary names, but modern game-changers too – The Interrupters will lay their place on the Punk In Drublic stage, proving why many are tipping them as one of the most essential bands in modern punk. With latest album ‘Fight The Good Fight’ and lead by the unmistakable passion of Aimee Interrupter – expect them to go down a storm at Slam Dunk 2019.

Santa Barbara’s very own Lagwagon are set to bring their immediate take on classic punk to Leeds and Hatfield in May, and as the first band ever signed to Fat Mike’s record label – it makes sense why they’ll be joining the party with Punk In Drublic. Classic Swedish heavyweights Millencolin will return to Slam Dunk 2019, fresh off the back of the release of anticipated new album ‘SOS’ in February. With the fun-time vibes of The Bombpopsrounding out the bill, it makes sure that Punk In Drublic’s debut at Slam Dunk is one bursting with the very best in punk rock, and another essential reason why Slam Dunk stands as the definitive alternative home of 2019.

With a stellar array of names heading across two large outdoor sites in Leeds and Hatfield, Slam Dunk Festival 2019 promises to be a must-visit moment in the summer festival calendar – as not just the home for alternative music, but the home of alternative culture in the UK. 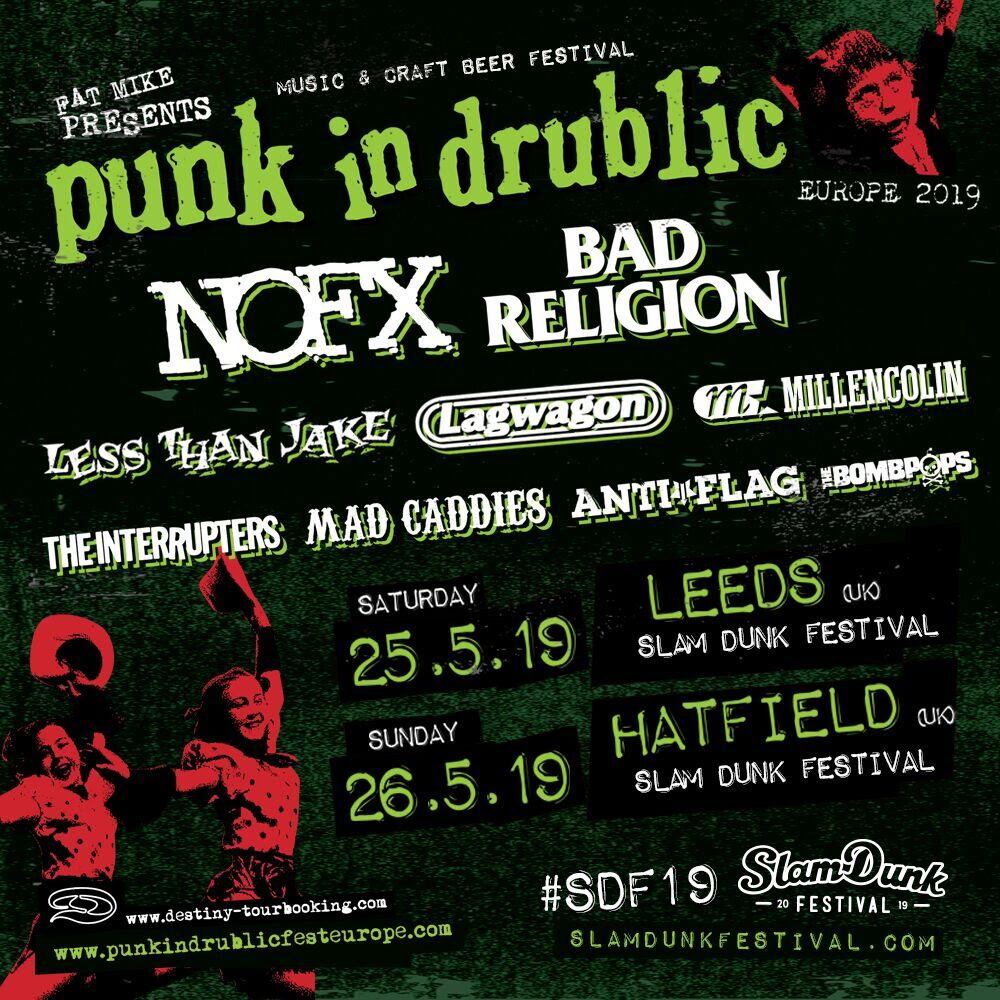 ANNOUNCED PREVIOUSLY
All Time Low, Bullet For My Valentine, NOFX, New Found Glory, glassjaw, Simple Plan, The Menzingers, Waterparks, Story Of The Year, Gallows, Mad Caddies, The Get Up Kids, Saves The Day, Silverstein, Turnstile, Knocked Loose, I Don’t Know How But They Found Me, Trophy Eyes, Tiny Moving Parts