Alex Govoreanu and his team are the protagonists in the Covid-19 novel, who put their hearts and souls into delivering the ultimate travel experience the modern way.

The global pandemic was detrimental to some companies. Many entrepreneurs gave up at the very beginning, whereas others persisted until they reached bankruptcy.

However, Questo’s story is different. In an interview for The Voice of London, Alex Govoreanu, CEO and co-founder of the Questo app, said: ‘‘Coronavirus is, as cynically as it may sound, a great opportunity for us, because we can offer a safe option for exploring a city.’’ 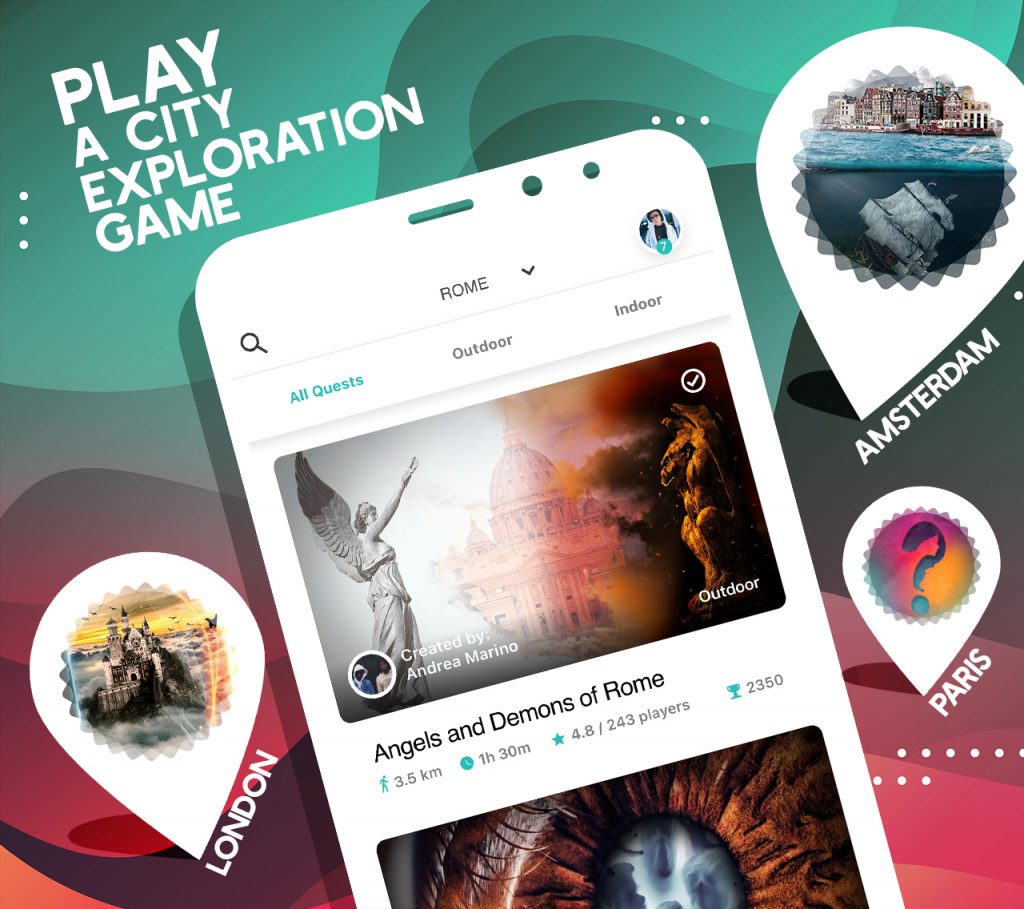 Questo covers 80 cities around the world, seven of which in the UK. Photo by Questo Press Kit

The business has not stopped working in the hardest of times. Yesterday, it announced its pandemic initiative to assist 100 travel companies in creating self-guided tours by providing free access to its gaming platform.

Questo partnered with Iconic London Taxi Tours at the beginning of October to offer Londoners a new quest called Jack the Ripper. There are five more games in the capital and much to explore in Glasgow, Manchester, Birmingham, Liverpool, Cambridge, Letchworth, and Bristol.

‘‘In late February, we envisioned a three-step recovery scenario. When the current situation improves, people will start playing in their own cities. Then they may feel safe to travel domestically, for example, from London to Cambridge. Finally, they may decide to go outside their country, but not very far. Many Germans went to Austria and the Netherlands during the summer. By following this plan, we started building quests in cities that are close to each other.’’ 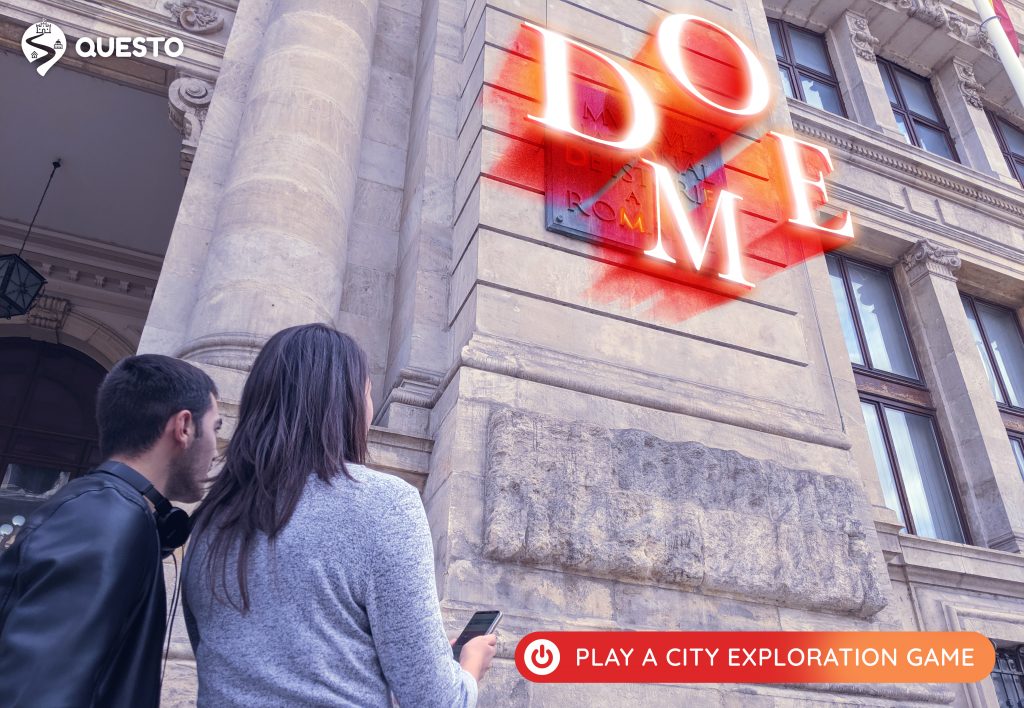 The app was launched in 2017 in Sibiu, Romania, and has taken over the world by providing self-exploration games in 80 cities to date. With this achievement, the team’s aim to reach 100 locations by the end of 2020 seems more than feasible.

Govoreanu said: ‘‘Nobody had any idea about what a ‘city exploration’ is when we started doing this. Our market is still young, but we see signs of success. If you manage to build something from scratch, then it’s massive.’’ 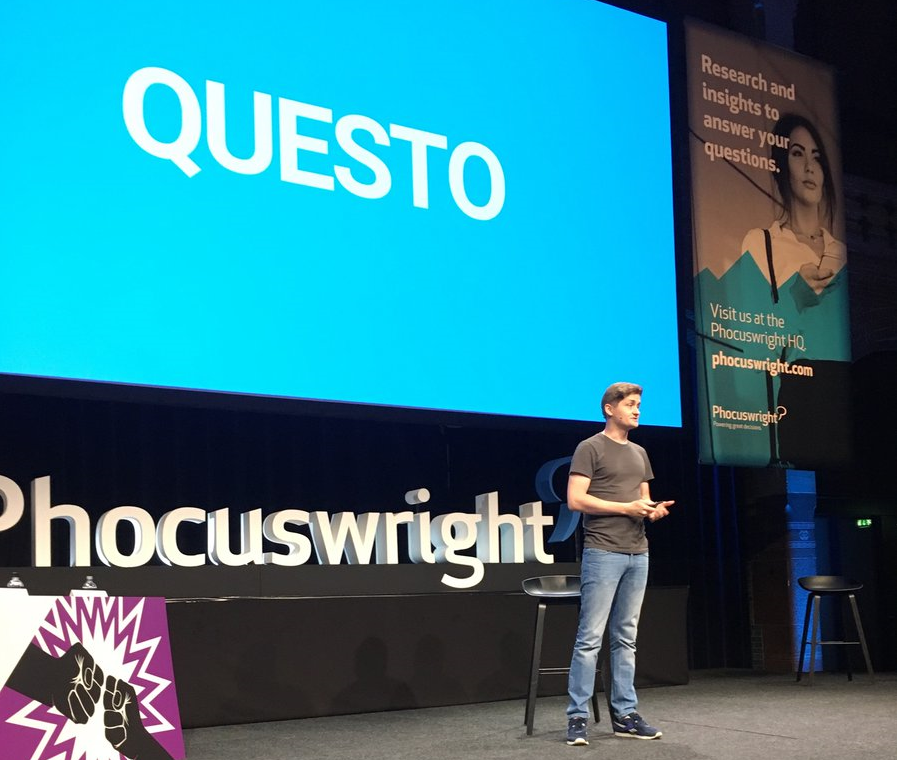 Govoreanu receives a travel award on behalf of the Questo team at Phocuswright Europe. Photo by Questo Press Kit

The signs of success are discernible. Questo is a member of the PhocusWire’s Hot 25 Start-ups 2020 list and a semifinalist in the World Tourism Organization (UNWTO) Healing Solutions Tourism Challenge, which recognises the most innovative entrepreneurs and their methods of reducing the impact of Covid-19 on tourism.

The virus did not prevent the start-up from raising more than £542,193 to expand its network of online tours in 50 new cities internationally.

Govoreanu said: ‘‘One key element of Questo is diversity. It’s a product for all, no matter age, gender, and interests.’’ 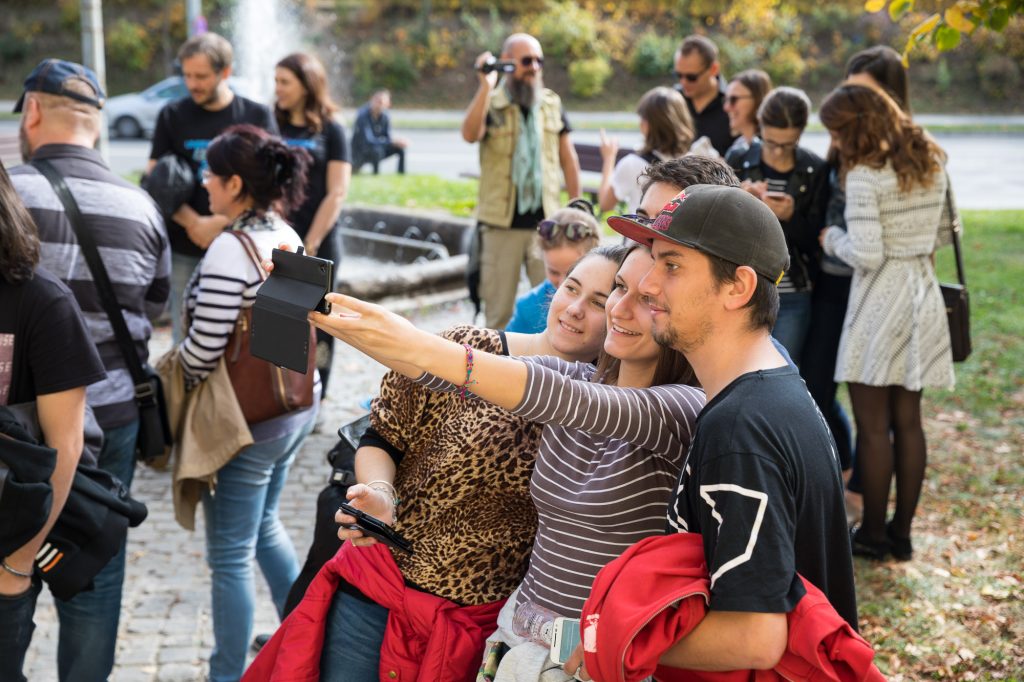 Users at the starting point of a quest. Photo by Questo Press Kit

The city-exploration game released its most recent quest in Pisa four days ago.

The app has its advantages when compared to tour guides. The booking is instant, and the quests are flexible. You can take a break whenever you like – get coffee, have some snacks – and continue.

Re-discovering cities with Questo is modern and affordable. ‘‘Our quests range between £9 to £18. Booking a private tour guide costs around £150.’’

Unlike other smartphone applications, Questo informs and entertains tourists by promoting a real-life discovery.

‘‘The fun part is that you go out and do a role play. For example, you can be a medieval knight in Vienna, or Jack the Ripper in London, or a regular guy exploring Montmartre in Paris. By doing this impersonation, you have a reason to go from place to place. You don’t just do a checklist. (…) When you arrive at that new place, you have to solve a challenge. It is a brain-stimulating activity that rewards you with a new story.’’ 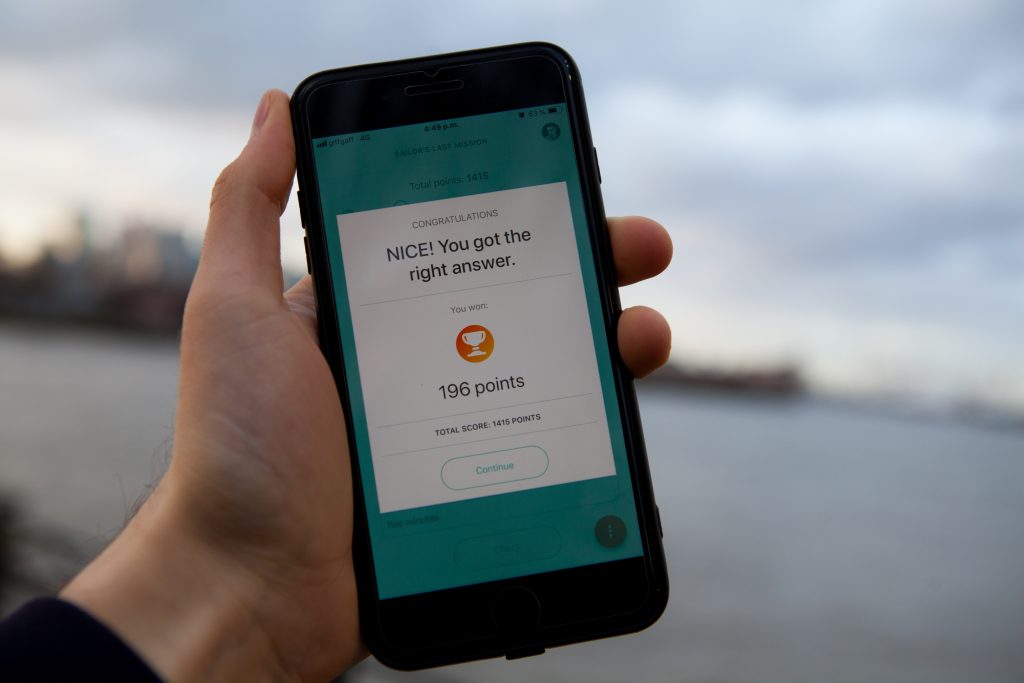 Each quest introduces you to a magical world. While doing the Wizard of London & The Dark Realm quest in London, a friend of mine and I were staring at the Dizzy Clock on Earlham Street. We had to decipher what the letters M and T stand for and sum their value. Passers-by were intrigued.

Questo improves your critical thinking with clues. Govoreanu said: ‘‘In our stories, we do not give you the random information provided on a regular tour, such as: ‘They built this building in 1840.’ Nobody cares about that. People are interested in facts they can share with friends over a beer.’’ 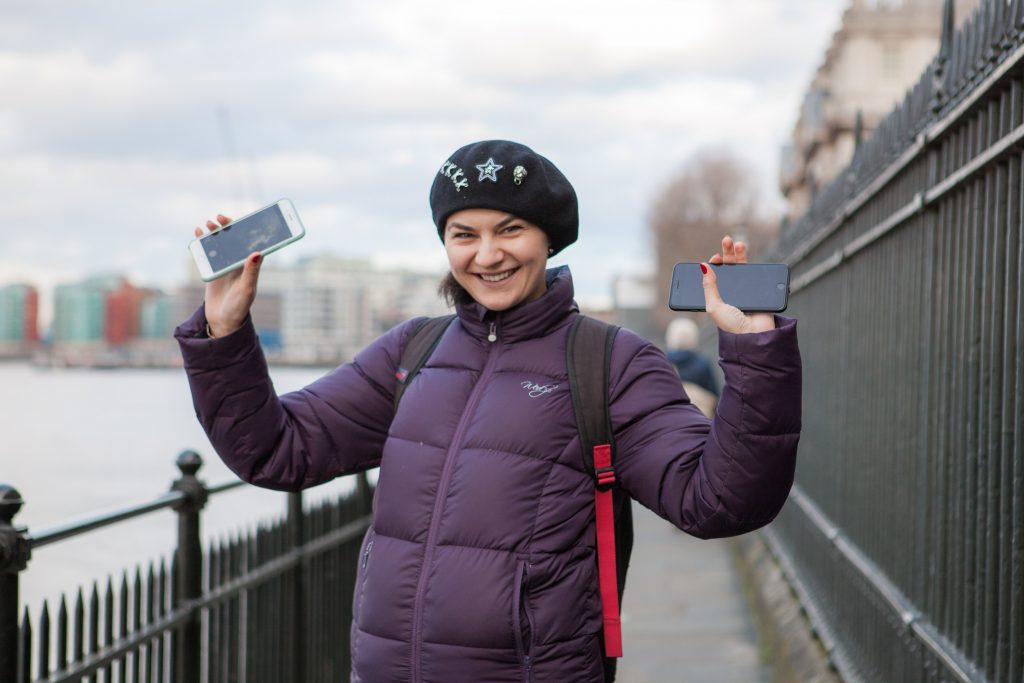 A user plays a quest in London. Photo by Questo Press Kit

Although the Questo journey as an enterprise may look smooth, there have been many obstacles. ‘‘We had this vision about changing the way in which people explore. A lot more people were saying that it won’t work. No one believed in all great companies in the early days. That’s a sign of disruption. If we were to design a better search engine, everyone would know what we are doing. However, we wanted to build an industry.’’ 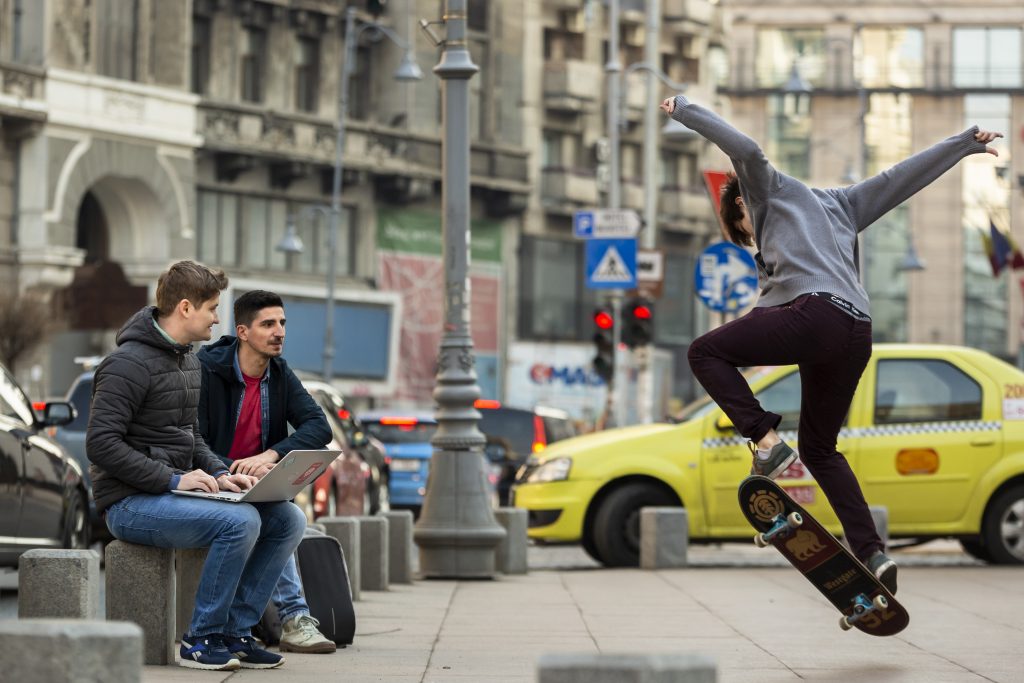 The app was awarded the Most Disruptive Travel Start-up of 2019 in Hospitality award from the World Tourism Organisation and won a grant from Booking.com Booster Lab Tel Aviv in 2018.

Govoreanu believes the main challenge for start-ups is building the team. ‘‘Having the right people next to you, who believe in the same goal as you do, is beneficial.’’ 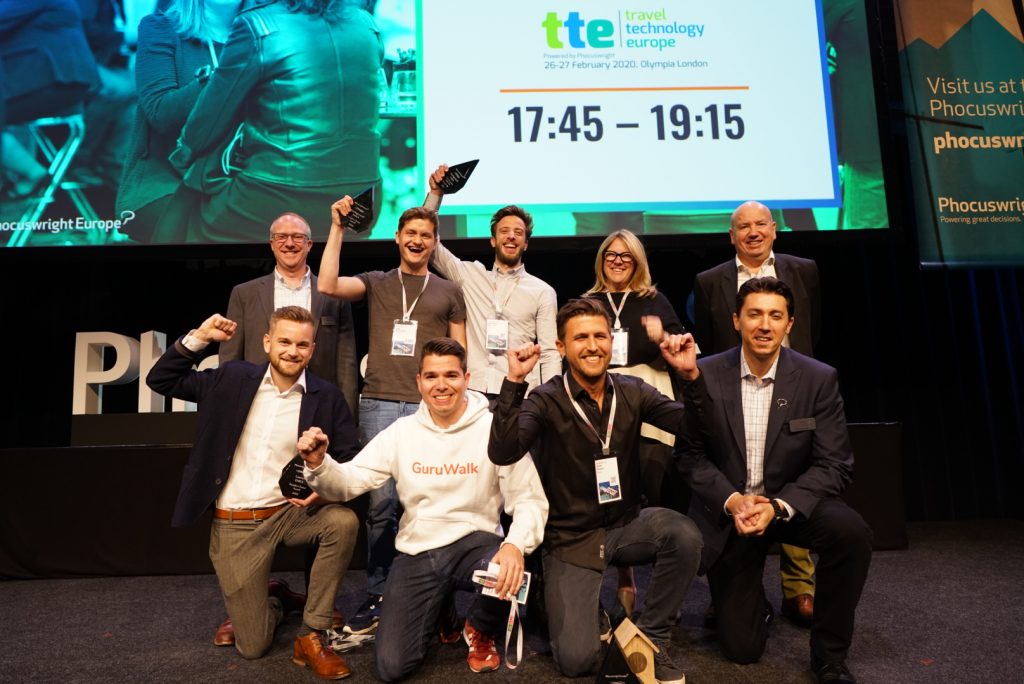 He encourages young entrepreneurs not to give up on their dreams. ‘‘Find something which you believe in and do it. That is what we did with Questo.’’