Since the beginning of 2017, 145 journalists and media workers have been killed according to the Committee to Protect Journalists. Jamal Khashoggi’s case has caught the world’s attention due its extreme nature and circumstances, but he was only one of many journalists whose life came to a gruesome end in the past two years.

These are the main events and facts leading to and following the death of Jamal Khashoggi that are important to understand:

Even after his death, facts are being covered with messy lies and the truth is being distorted by corruption in power; the very things Khashoggi, and countless other journalists, fight to correct.

Khashoggi’s story is tragic but it is not necessarily unique in terms of the reason for his passing. The graph below shows a breakdown of the number of journalists and media workers killed since the beginning of 2017. 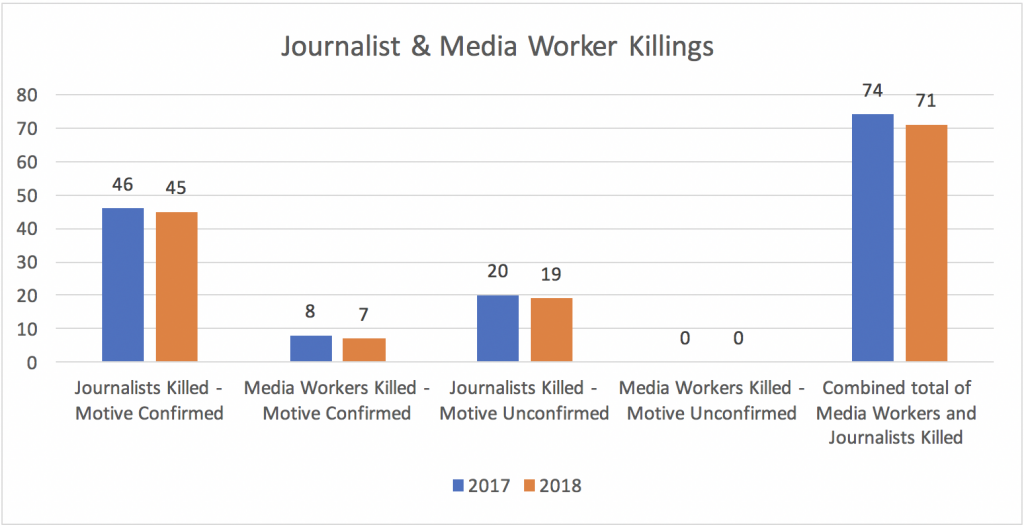 What does this mean for young, up-and-coming journalists and media workers aiming to hold power to account and incite positive change in society?

Anytime a journalist attempts to uncover a wrongdoing or hold any form of power to account, they are putting their life at risk due to the lack of effective protection for journalists in today’s society. President Trump encouraging violence against reporters a week ago, stating “Any guy that can do a body slam, he’s my kind of — he’s my guy” only increases that risk, evidenced in the bomb packages sent to prominent liberal political figures and media outlets, including CNN, this week.

The outrage expressed worldwide in response to the murder of Jamal Khashoggi shows that society is aware of the importance of free media and the need to keep media professionals safeguarded, so that they may continue to inform. However, real protection for people in this industry of truth-hunting does not exist, even though there are always people, usually much more powerful and dangerous than the journalists themselves, trying to keep the truth under lock and key.