Joint enterprise refers to the collection laws that that means a person can be convicted for a crime they did not play a decisive role in committing, or in some cases were not even involved in.

In 2016, “a stabbing by one man led to 11 convictions”. This occurred in May, despite the Supreme Court having ruled earlier that year in February, that joint enterprise laws had been used ineffectively, as they had been “wrongly interpreted for over 30 years”. After judges ruled “foresight” was not an efficient test of someone’s involvement in a murder case.

Historically, there are high-profile cases in England that have been effective in allowing for justified long-sentences and convictions, such as in the murders of Stephen Lawrence, Zac Olumegbon and Shaklius Townsend.

Although there are cases where joint enterprise can be recognised as a necessary law, the 2016 ruling by the Supreme Court has not been effective in addressing the problems the collection of laws cause, such as young people of colour being disproportionately incriminated by this law.

In the 2016 murder of Abdul Wahab Hafidah, seven young men were convicted of murder, despite only one of the men inflicting the fatal blow. Six of the men who had not stabbed Hafidah, were given sentences of 16 to 20 years. All of 11 the men convicted in the case were of black or mixed race-ethnicity, the youngest being 14 and the eldest 20.

This case is not an exception. Although it is difficult to determine exactly how many people of colour have been convicted on joint enterprise laws statically, as the government records joint enterprise cases as murder convictions.

However, there are academic data that would support people of colour being wrongly affected by joint enterprise laws, particularly in scenarios where the prosecution builds a case around perceived “gang membership”, as shown in this study carried out by The Bureau of Investigative Journalism at the University of Cambridge.

In England and Wales, 86% of the population is made up of white people. Yet the infographics below show how disproportionately young people and BAME are incriminated by joint enterprise laws, in the study by the University of Cambridge. 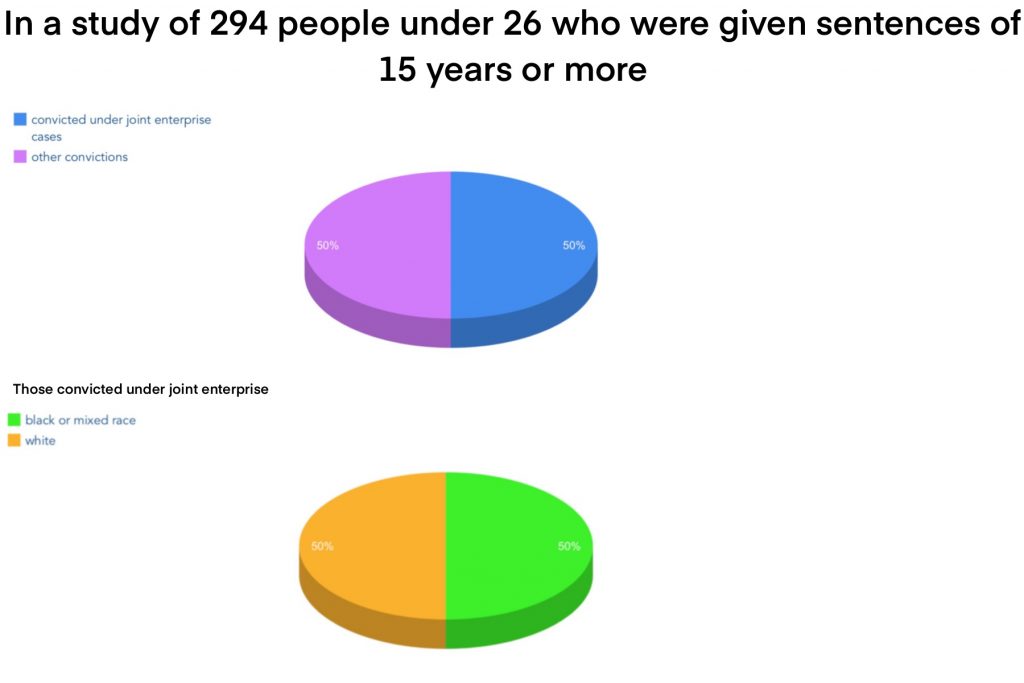 A 2016 study carried out by A Prison Reform Trust concluded similar findings to the University of Cambridge examined 61 joint enterprise cases, involving 157 defendants and found that “for defendants whose ethnicity was known, around two-thirds were from ethnic minorities.”

However, the data showed in the infographics is from 2016, as little academic research has been carried out in more recent years.

Fortunately, there are organisations attempting to change the unjust criminal convictions that joint enterprise cause, and bring attention to how this law ruins the lives of young men, and disproportionately affects black, Asian and minority ethnic.

When a group of 19-26 year olds were given the question “would you support urgent joint enterprise reform” 100% of them voted yes. 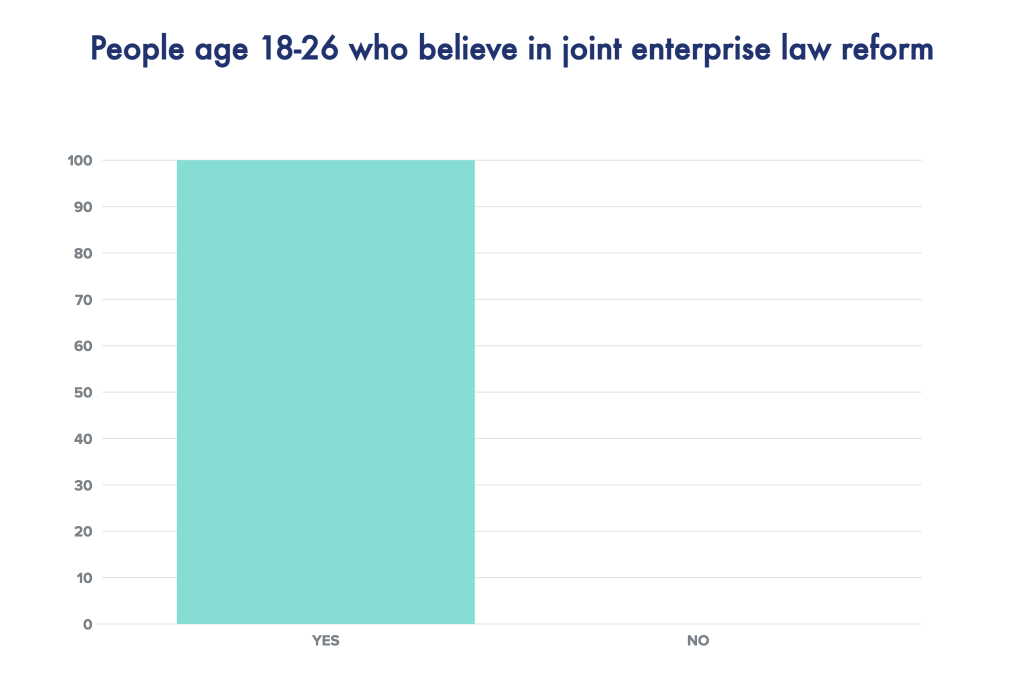 CoSign and JENGbA are two groups both co-founded and founded by young women, working to change the harm that joint enterprise rulings have caused.

JENGbA, which stands for: ‘joint enterprise, not guilty by association’, a campaign with and for those who have been wrongly convicted to reform legal abuse by the joint enterprise. JENGBA fights for the potential thousands of people who have been incarcerated on conviction of murder and not lesser offences as was recognised by the 2016 supreme court ruling.

@JENGbA agree David it is amazing we are still even considering sending children to prison. UK is the only country in EU that sends children including children convicted using #jointenterprise who are not guilty of the index offence to prison for Life! #Abolishchildlifers https://t.co/ggkaxBwSG3

CoSign, are an organisation calling for a review of the standard of evidence used to convict, as many joint enterprise convictions are based on a lack of evidence. The group are also sharing prisoner stories, and stories of the families of those convicted. Also, by bringing more attention to other groups affected by the law, such as women who were in abusive relationships.

CoSign has released a video interviewing the mothers of two men incarcerated on joint enterprise laws. Revealing the extent to which the law has given life sentences to people innocent of murder.

How can the perpetrator escape conviction whilst others serve a life sentence for his actions?

Joint enterprise has continued to ruin lives, despite the supreme court ruling that it has been an unjust law for years already. Currently, there is no way of knowing exactly how many lives have been affected, but CoSign estimate there could be thousands of people still wrongfully in prison.

Below are the petitions by both organisations:

Climate change: 2020 wrapped and why you should be worried

Collapsology: Is this the end of civilisation as we know it?